This is a big deal. I’ll explain why in a moment. But first, we need to talk about the blockchain…

The very basic premise of a blockchain is to allow transactions to happen smoothly and efficiently. You want to have those transactions confirmed (immediately) and a bulletproof tracking system that records the transactions. All without the use of some central party.

The somewhat simple concept could (and hopefully will) make our lives so much easier.

To put it into perspective, think about when you deposit a check at the bank. Let’s say you bank at Wells Fargo and get a check from someone who banks at JPMorgan Chase.

When you deposit this check, no one confirms that there are funds in this JPMorgan Chase account backing up this check. If the check is large enough, sometimes a hold will be placed on the funds, or a portion of the funds, until it “clears.” This typically takes days. If the check is of a nominal amount and the funds are available “immediately,” that doesn’t mean they are actually there.

If the check “bounces,” then you get hit with a bad check fee, and the funds are deducted from your account. The whole process can be incredibly frustrating.

This is because the systems at these banks don’t talk to each other. And this isn’t isolated to banking either. Think about healthcare… you go to one hospital, and they aren’t going to have records from a visit to a different hospital.

Mining And Proof Of Work

Blockchain solves these headache situations. The blockchain solution is to confirm transactions by letting everyone keep a copy of the transaction ledger. And then, an official ledger is based on consensus among people with a demonstrated stake in the system.

Originally, this was called “proof of work” — Bitcoin still operates in this manner.

Proof of work was accomplished by having people’s computers work endlessly to solve a somewhat meaningless math problem. Whoever solves the math problems the fastest gets to confirm a block of Bitcoin transactions. They are rewarded with some newly minted Bitcoin, and everyone starts over.

This is called “mining.”

Much like the gold rush, Bitcoin mining led to a flurry of people buying computers, loading them with the fastest processors and graphics cards, and setting up their own little Bitcoin mining farm. All to gain an edge on being the fastest to solve these math problems. All in the hopes of being rewarded with Bitcoin.

In the early stages of cryptocurrency, this worked fine and was quite innovative. It allowed transactions to happen somewhat quickly and provided a ledger maintained by people with incentives to do the right thing — people you can trust — without knowing who they are. In other words, no central party.

As Bitcoin and cryptocurrencies gained popularity, this proof of work system ran into a couple of snags. The biggest issue was that it used a massive amount of electricity. It was getting to a point where it was becoming uneconomical.

In fact, Bitcoin expends about 200 terawatt-hours (TWh) per year of energy and emits about 100 megatons of carbon per year. That’s about how much power the entire country of Finland uses in a year. You can also see how it compares with other popular industry consumption: 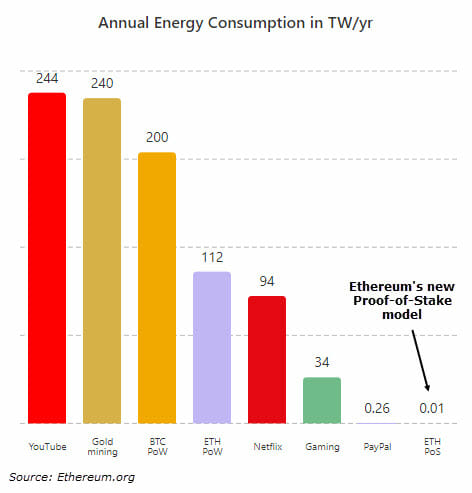 Developers of later blockchains realized that there are other ways to have transactions confirmed.

So instead of having people rush out to buy computers and spend a grip of money on electricity in order to (hopefully) be the first to solve the math problem, which then allows you to earn Bitcoin… why not demonstrate that you have an economic stake by spending money on Bitcoin?

After all, if you own a bunch of Bitcoin, you will want it to be valuable. This incentive alone will entice you to confirm transactions honestly to keep Bitcoin’s integrity and value intact.

Plus, owning a lot of Bitcoin demonstrates a stake in the currency that early adopters of the proof-of-work model were based on.

This new concept is called “proof of stake.” And this is what the Merge is all about.

This upgrade is dubbed the Merge because the existing Ethereum blockchain combined with a parallel network (on September 14 at midnight) that’s been running for almost two years to test the proof-of-stake concept.

How The New Ethereum Works

The long-awaited Merge is bound to shake up the crypto world in a big way. The biggest benefit is that it will lower Ethereum’s energy use by 99%, as it will no longer depend on miners.

Instead, it will use the proof-of-stake model. It will require validators to put some skin in the game (staking) in the form of Ether coins. Staking gives large Ether owners (you need at least 32 ETH to become a validator) the right to add a block of transactions to the ledger. When they do so, they will be rewarded with new Ether.

Suppose you have a smaller amount of Ether or don’t want to take on the task of being a validator. In that case, you can delegate them to a validator (one that you trust), and that validator can stake them and confirm transactions, and then you’ll get a share of the Ether rewards.

I won’t get into all the intricacies of staking Ether and/or becoming a validator in this issue, but I will in a later one. So stay tuned.

Another advantage of the new is that it will resemble a traditional financial asset that pays interest, like a bond or savings account. That could entice big money managers like hedge funds and institutional investors who’ve stayed on the crypto sidelines so far.

More money flowing into Ethereum should push the price higher.

So far, everything seems to be working. It will take some time for validators to get set up and the intricacies to be worked out. Patience and time are required. But know this…

This Merge is a big deal. Bitcoin may be the face of crypto, but Ethereum is the backbone of the blockchain and decentralized world.

Editor’s Note: If you’re one of our many readers who wished they had the chance to enjoy the previous runup in cryptocurrencies but didn’t take advantage, then you’re about to get a second chance…

Go here to get all the details now.