An Easy Way To Profit From Booming Natural Gas Prices…

Let’s talk a little about liquefied natural gas (LNG) and its importance in our world.

As the name suggests, LNG is natural gas (methane) in liquid form. Natural gas is a vital energy source not only in the United States but across the globe.

In the United States, natural gas accounts for 32% of our energy, according to the Energy Information Administration.

Natural gas is also heavily relied upon in Europe, which is seeing massive shortages (and skyrocketing energy bills). This is because Russia was a primary supplier of natural gas. As European countries hit Russia with sanctions after it invaded Ukraine, Russia struck back by cutting off its primary source of energy… natural gas.

Long story short, the UK and Europe are scrambling to replace that Russian natural gas in time for winter. Reports indicate they’re actually pulling it off, with storage rates running ahead of schedule. This is why prices have retreated a bit recently. But as long as the conflict continues, natural gas will continue to be a hot commodity… 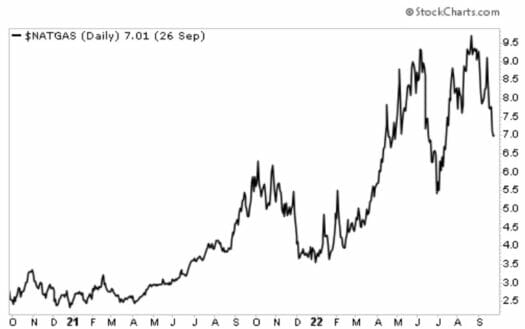 On land, natural gas can be transported through pipelines. But to efficiently transport natural gas overseas, it must be turned into a liquid form. This is because, in its liquid state, the volume shrinks drastically. We’re talking by 600 times. For perspective, that’s like taking 600 one-gallon jugs of natural gas and liquefying it so that you’re left with just a single one-gallon jug.

To be liquefied, natural gas must be cooled down to -260 degrees Fahrenheit. Once in its liquid state, it can be loaded onto specialized LNG carriers, which keeps it cold, and they can ship it to wherever it is needed. When it arrives at facilities overseas, the LNG is converted back into its gas state (called regasification), so it can be piped into homes and businesses.

My Pick To Profit

Cheniere Energy (AMEX: LNG) is a pioneer in the U.S. liquid natural gas (LNG) market. It owns and operates LNG terminals and liquefaction projects near Corpus Christi, Texas, and at the Sabine Pass LNG Terminal, located on the Texas and Louisiana border.

Cheniere is the largest producer of LNG in the country and the second largest operator in the world.

Cheniere’s entire business is shipping natural gas to places where it’s highly needed. And it is big business (especially with the war in Ukraine restricting natural gas from Russia).

In 2021, Cheniere generated $17.6 billion in revenue shipping LNG across the globe. This was an 88% growth over 2020. The company is on track to post another spectacular year of sales growth this year. Projections call for over $29.4 billion in revenue, which would be 67% year-over-year growth.

Of course, sales growth doesn’t mean much if you aren’t keeping any of it. Fortunately, that’s not a problem for Cheniere. Through the first half of this year, operating profits sit at roughly $5.4 billion. That’s on $15.6 billion in sales it has reported so far, good for operating profit margins of around 35%.

Digging a little deeper into the financials, we find my favorite line item: cash from operations. This tells us the actual cash the company is making from its business. No gimmicks like amortization or depreciation go into this number.

In the first half of this year, cash from operations clocked in at nearly $5.5 billion. The company had just over $1.5 billion in cash flow last year. In other words, cash flow has surged 267%.

Cheniere is on track to finish this year with a cash flow of more than $9.1 billion, representing a massive improvement over the $2.9 billion it made in 2021.

There’s clearly momentum in the LNG business, as we’re seeing record numbers in Cheniere’s financials. And although great financials don’t always translate into great returns, in this case, it does…

Shares of Cheniere took a breather after hitting new highs in August. They later broke out to new highs in September, and could be taking another breather before resuming their run. 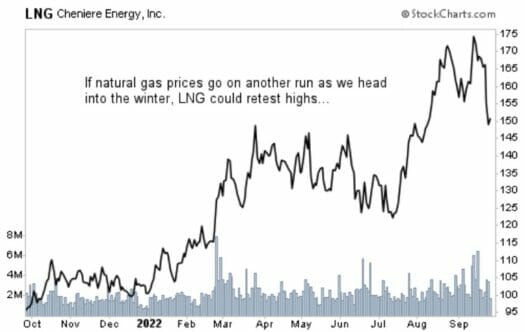 I love seeing stocks hit new highs. That tells me the momentum is strong, and there’s a high probability the stock will continue to make new highs. If natural gas prices tumble, however, that would have a negative impact on Cheniere. Also, if we have a warmer than anticipated start to winter, where demand for natural gas isn’t as high as expected, that could put a damper on shares.

I don’t think that’s likely, though. But I will remind readers of something I said recently: investors would be wise to focus on hitting singles and doubles in this market. So don’t be hesitant to pull profits off the table quickly with this one.

P.S. If you’re a looking for a long-term “home run” pick to add to your portfolio, then you should check this out…

I’ve been researching the “next investment frontier” in tech for the past few months. And I’m convinced this is the next big thing…

I’m talking about the commercialization of outer space. It’s not as crazy as it sounds — in fact, it’s already happening. Companies are scrambling to win the race, and I’ve discovered a unique “backdoor” way we can gain exposure. And if we’re right, it could lead to some of the biggest gains of our lives.