An Important Message For Investors As Election Season Heats Up…

It feels a little crazy, but we’re entering the home stretch of this year.

The chaos and uncertainty we’ve seen already this year have already weighed heavily on markets.

We’ve seen tech stocks crash. The S&P 500 got off to its worst start in decades and entered bear market territory. Russia raised global tensions by going to war with Ukraine. Inflation has been rampant. Energy prices are through the roof. And this all happened before 2022 was even halfway over.

The point is, there’s already a lot of anxiety about the future of the economy and the stock market. But it may get worse, especially with the looming midterm elections.

We’ve had some contentious elections recently. Both the 2016 and 2020 elections were ones for the history books.

Leading up to those elections, investors were terrified of what might happen to their portfolios should the opposing party win. We had record voter turnout, and it came down to the wire. And although the dust has settled, nerves haven’t…

So get ready for the political rhetoric and media bombardment to crank up to eleven.

But today, I want to offer you a little bit of hope — and redirect your thoughts to long-term trends that are likely to be profitable for investors regardless of what happens in Washington DC.

Why Politics And Investing Don’t Mix

If you’re feeling a little anxious about the elections, I get it. But I want to remind you of something I’ve said to my premium readers before about mixing politics and investing…

In short, don’t. I know sometimes it’s inevitable, but you need to at least try.

Now, I don’t mean to suggest that presidents (or whoever controls Congress) are irrelevant to markets and the economy. They do matter — but often less than you think.

Yes, sometimes Congress may get around to passing legislation affecting, say, the oil & gas or the healthcare industry. But good companies find a way to persevere despite regulations and heavier tax bills thrown their way.

But we must approach the market with a level head. In all likelihood, whoever wins the election will not make or break your portfolio.

Some Perspective On Just How Good We Have It…

If you want to see what real political risk looks like, then take a look at a country like Argentina…

But its home country — Argentina — is a complete disaster. Having lived there, I want so bad for it to turn around. It truly has the potential to be a top country in the world. But that’s unlikely anytime soon.

Its Vice President, Cristina Fernandez de Kirchner, is one of the most polarizing figures in the country. Quite frankly, she has been an anchor on the country for over a decade.

She was formerly the President and is now the vice president. During her presidency, she came under fire for swindling government funds. The prosecuting lawyer was mysteriously murdered leading up to the case. Now she is under fire again and is facing 12 years in prison and a ban from ever holding public office again. If you want to read more, Al Jazeera has done a good job of covering Kirchner here.

Outside of terrible leadership, inflation has run rampant at more than 50%. Most of the country is in poverty. All this is on top of Argentina’s already-spotty track record of defaults over the past few decades.

Combined, this has weighed heavily on investments based out of Argentina. Even a company with a stellar portfolio of assets, like Cresud (Nasdaq: CRESY).

Cresud is Argentina’s largest private farmland owner and cattle raiser. It also owns office and retail buildings, as well as hotels across New York, Uruguay, and Brazil. Its portfolio of assets is fantastic. But even it hasn’t been able to escape the cloud hanging over this beautiful country. 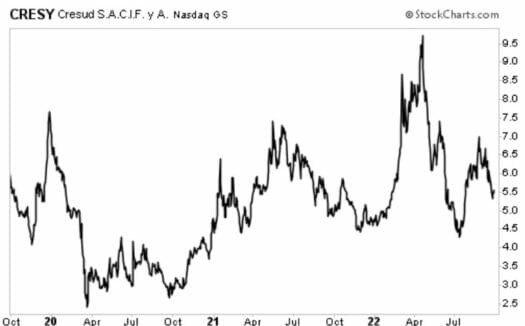 The point is, we have a lot more going for us here in America. Sure, it isn’t perfect — and politics do weigh on markets.

But some trends are so big, and so powerful, that it simply doesn’t matter who’s in charge in Washington.

That’s where you should focus most of your time as an investor. Look for companies with major long-term catalysts that will continue to prosper and generate cash flow for years to come.

In short, don’t let politics hijack our investment strategy. Save it for the dinner table at Thanksgiving.

P.S. I recently found one of the market’s best-kept secrets — and it’s one of the most exciting (and profitable) opportunities I’ve ever seen…

My research team and I discovered a little-known satellite company that quietly purchased an Internet tech startup at a bargain basement price. But most analysts on Wall Street completely missed a key detail about this transaction that could lead to a huge windfall for years to come.