Are You Missing Out On Some Of The Best High-Yield Stocks In The World?

One reason October is one of my favorite times of the year is because that’s when the baseball pennant race heats up.

While it may be an American pastime, baseball has become a truly international sport. Any baseball fan can attest to that. For every homegrown slugger like Mike Trout or ace pitcher like Clayton Kershaw, there’s an international counterpart. There isn’t a single team in the big leagues that doesn’t have foreign-born talent on their roster. It’s part of the recipe for a winning team.

The same is true when it comes to your portfolio.

Naturally, we’re all going to have a home-country bias when it comes to stock selection. But it’s worthwhile to scout around for a key foreign acquisition or two to strengthen your lineup. You’ll be surprised by what you might find…

The Case For International Exposure

According to the World Bank, the United States accounts for about 60% of the world’s stock market value. That means 40% reside overseas. In fact, 80% of the world’s publicly-traded companies are foreign-based, compared with 20% headquartered domestically.

So there are four times more investment options outside our borders than within. And many of those companies pay two to three times more than the sub-2% average yield found in the S&P 500.

I’m not saying you should bet the farm on international companies. The U.S. market is clearly the best game in town. But if your portfolio lacks international exposure, you’re missing out on a huge chunk of the world’s potential opportunities.

Stock prices are inextricably linked to corporate cash flows, which are driven by underlying economic strength and growth. As the world’s largest economy with a gross domestic product (GDP) of about $23 trillion, the U.S. can’t deliver the robust growth rates it once did.

And here’s another shocking statistic: The S&P 500 has been the world’s top-performing index a grand total of zero times over the last 30 years. Not once.

The reason is pretty simple. While the U.S. is still the biggest kid on the block, the rest of the world is catching up. In 2000, the U.S. represented one-third of the world’s total economic output. But that percentage has been shrinking and now stands at around 22%.

That’s still a lot of economic muscle for one country. But four-fifths of all goods and services are being produced overseas. Consumer spending, in particular, is heating up as a rising global middle class (from China to India and more) can now afford big-ticket goods that were once considered luxuries.

The International Monetary Fund (IMF) forecasts U.S. GDP growth of 1.6% in 2022. Nothing wrong with that. But it’s not uncommon for emerging markets to deliver two to three times faster GDP growth than the U.S.

Some countries are expanding even faster. Take a look at the chart below, which shows GDP growth estimates for what are expected to be the 10 fastst growing economies in 2022. 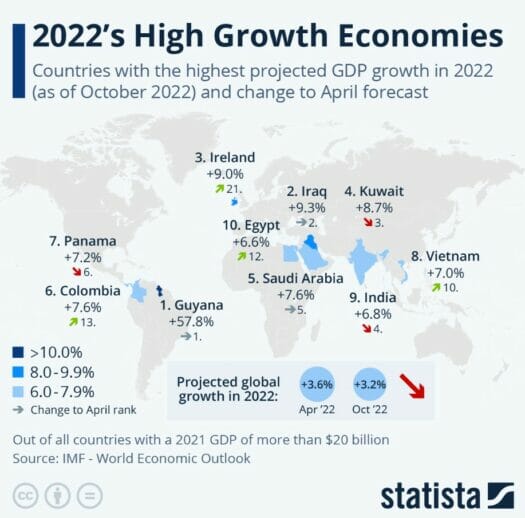 Now, I’m not suggesting you call your broker and instruct him to bet everything on Guyana. I don’t even know if that’s possible, so please don’t. The point is that foreign economies (and their corresponding stock markets) routinely outrun our own — and those returns aren’t being skewed by one or two standout performers.

Case in point, forecasters are projecting a red-hot economic expansion of 6.8% for India. And that’s not a one-off surprise, either. Except for the pandemic, the country has been posting solid growth year after year — and is expected to surpass Japan as Asia’s second-largest economy by 2030.

The point is that humming activity will flow to corporate earnings in these growing economies. And that spells opportunity for investors who are willing to add even just a little bit of exposure.

If You Like High Yields, You Need To Look Abroad

But let’s not forget another big appeal of international stocks: income. As you may know, dividend yields in the United States have been on a slow decline for several reasons. But generous dividends remain a priority in many foreign markets.

While the average yield on an S&P 500 stock has sagged to less than 2%, payouts tend to be far more generous in many foreign markets. The average yield in Australia is close to 4.5%, while the benchmark FTSE 100 in the U.K. pays nearly 4%.

In fact, just four of the world’s 20 largest banks are based in the United States. So if you limit your portfolio to domestic stocks, then you automatically eliminate the other 16 from consideration.

The USA does have bragging rights to the world’s largest retailer in Walmart (NYSE: WMT). But France’s Carrefour (OTC: CRRFY) isn’t too far behind. And Germany’s discount grocery chain Aldi has over 11,000 stores in 18 countries, more outlets than Albertson’s and Publix combined.

If you look at the world’s 30 largest retailers by sales, only 11 call the U.S. home, whereas 19 are headquartered in foreign countries, from Australia to the Netherlands. Likewise, more than half (11) of the 20 biggest money-making pharmaceutical companies are based outside the United States.

That’s one reason why we own pharma giant GlaxoSmithKline (NYSE: GSK) — which sports a robust dividend yield of 5.5%.

The story is the same across many other industries… steelmaking, mining, manufacturing, you name it.

To show you what I mean, I recently ran a screen of high-yielding foreign stocks with shares listed on U.S. exchanges. Specifically, I looked for profitable firms with market caps of $10 billion or greater, offering investors a trailing yield of at least 5%. Here’s what I found…

The names on this list aren’t intended to be recommendations. But you might want to look into them further — you may find some gems in there.

Another appeal of foreign stocks is that they are also routinely cheaper than their U.S. counterparts in relative and historical terms. And, of course, there are plenty of funds that can give you instant exposure if you don’t feel comfortable picking favorites on your own.

Bottom line, if you haven’t already added some international flavor to our portfolio, now’s a good time to start.

We hold several foreign dividend payers over at High-Yield Investing. It’s just one of the many ways my team and I find market-beating yields that you won’t hear about anywhere else.

In my latest report, I uncover 5 “bulletproof” high-yield names you can feel comfortable owning no matter what is going on in the market.

You can go here to learn more right now.