It was the fourth straight hike as the central bank continues to try to rein in stubbornly high inflation.

None of this was a surprise. As mentioned previously, the market wanted to know today whether there would be any hints of a slower pace of hikes after this month.

In its official policy statement, the Fed weighed in on that prospect:

“In determining the pace of future increases in the target range the committee will take into account the cumulative tightening of monetary policy, the lags with which monetary policy affects economic activity and inflation and economic and financial developments.”

If that sounds like the Fed is hedging itself, that’s because it is. But it’s important to note that these statements rarely change much from meeting to meeting. And this is a significant change in Fedspeak. While acknowledging that the impact of its decisions will take some time to filter through the economy, the central bank is leaving ample room for continued rate hikes.

No “Pivot” In Sight…

For those who were hoping for a “pivot,” Powell had this to say:

“That time is coming, and it may come as soon as the next meeting, or the one after that.” He also added that “no decision has been made.”

But then Fed Chair Jerome Powell threw cold water on that notion. Here’s what he said in his press conference following the decision, courtesy of Yahoo Finance:

“It is very premature, in my view, to think about or be talking about pausing our rate hikes,” Powell stressed. “We have a ways to go. Our policy, we need ongoing rate hikes to get to that level of sufficiently restrictive [territory] — and of course, we don’t know exactly where that is. … I would expect to us to continue to update it based on what we’re seeing with incoming data.”

Again, if it seems like Powell is talking out of both sides of his mouth, it’s because he is. Powell admitted that the path is “narrow” to a so-called “soft landing.” In other words, the Fed will have to continue its restrictive policy of raising rates to ensure inflation is sufficiently tamed. But it doesn’t want to decimate the economy, either.

As Anna Wong, chief US economist for Bloomberg, said in this article:

“I think the most important thing to watch for is how Powell communicates the potential downshift in the pace of rate hikes. He will want to avoid giving the impression that a pivot is imminent, especially not when core inflation is clearly still going strong. He would be preparing for the markets for a 50 basis-point hike in December but which will also be accompanied with a dot plot, which shows 5% terminal rate.”

Look At The Bright Side…

Any talk of inflation “moderating” belies just how much work there is to be done. As you can see in the chart below, there is till a lot of work to be done on that front… 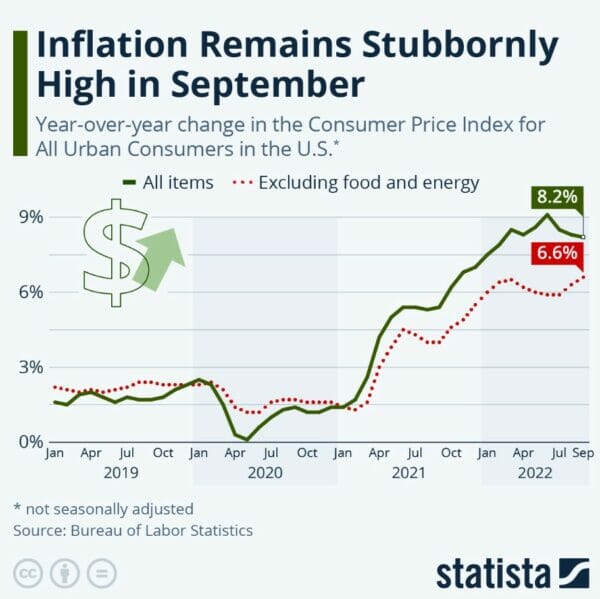 But to leave you with a glass-half-full perspective, consider this…

Banks are beginning to (finally) pay a little more to deposit holders. High-yield savings accounts offered by SoFi and Marcus (a Goldman Sachs unit) pay between 2.5% and 3%.

And if you missed the boat on I bonds, there’s still hope. According to TreasuryDirect, the new rate for I bonds issued in November 2022 through April 2023 is 6.89%. It’s not 9%, but hey, it’s still pretty good. And for the first time, they will pay 0.4% above the inflation rate. This means you will be guaranteed to (modestly) beat inflation if you hold them for longer than five years.

(Remember, if you hold I bonds for less than five years, you will forfeit one quarter of interest payments. You can only purchase $10,000 per Social Security number per year.)

And finally, thanks to the general selloff this year, dividend yields on many equities are now beginning to look attractive.

We’ll have more to say about the impact of this decision in the days and weeks ahead. In the meantime, you’ve probably been reading a lot about the exciting investment opportunities in the marijuana industry…

Due diligence is required for the cannabis sector, and it’s also important to remain patient because positive regulatory changes are coming down the pike that will make a huge difference.

As the U.S. midterm elections rapidly approach, John explained the little-known reason why federal legalization of marijuana could be days away…and why a slew of states are poised to create new state-legal markets.

During the online Town Hall, John revealed the one simple marijuana trade that could dump piles of cash into your brokerage account before the midterm votes are even counted. This event has been archived and is viewable for a limited time only.