I’ve said it before, and I’ll say it again.

The oil industry is a boom or bust industry. Always has been and probably always will be.

As a shareholder, it can be infuriating. Downright depressing even. But if you play it right, it can also be quite rewarding…

To give you an idea of the kind of volatility I’m talking about, let’s get some perspective by looking at the chart below. It shows benchmark West Texas Intermediate crude prices over a 70-year period, adjusted for inflation (recessions are in grey). 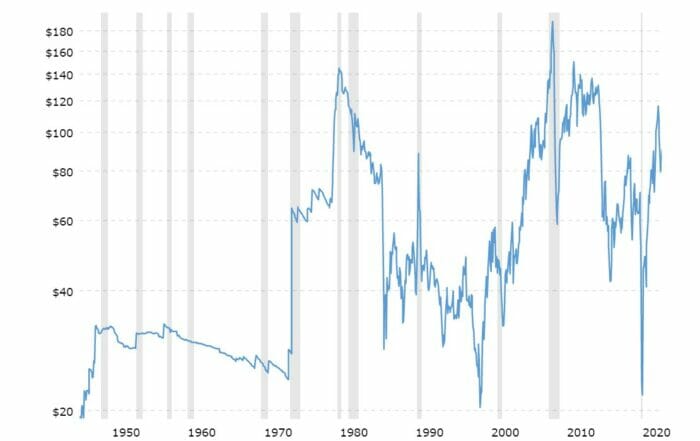 As you can see from the chart, our last boom and bust in oil wasn’t that long ago. Back then, energy companies always acted the same way… during the good times, they’d ramp up production, overleverage themselves… and then when oil prices dropped, they’d fall apart. Dividends would be cut, and share prices would tumble.

Most of the overleveraged oil companies would go out of business, and a dark cloud would hang over the industry.

Well, it seems that oil companies have learned a thing or two from these previous oil booms and busts. As oil prices climbed earlier this year, they didn’t ramp up production like they’ve typically done (much to the chagrin of many politicians).

As it turns out, energy companies can’t control oil prices. But they can control how they respond.

Oil companies have kept capital expenditures in check and have focused instead on operational efficiency and rewarding shareholders through dividends and share buybacks. This approach has (so far) allowed energy companies to deliver more stable and consistent dividends.

ConocoPhillips (NYSE: COP) is a perfect example of what I’m talking about…

If you’re a regular reader, then you may have seen me mention COP before. My premium readers and I traded it earlier this year, eking out a modest gain. But momentum has returned, and I think we can do a little better this time…

COP a heavyweight in the oil and gas exploration and production space (“E&P”). The company has a deep, rich history going back to 1875. It has ties to Standard Oil — the iconic oil company founded by John D. Rockefeller. Standard was eventually forced to separate into 34 independent companies by the U.S. Supreme Court, which found it to be an illegal monopoly. (At one point, it controlled nearly 90% of oil in the United States.)

Today, ConocoPhillips is the world’s largest independent E&P company based on production and proven reserves. It boasts a market capitalization of over $157 billion and has operations across 14 countries. It explores for, produces, transports, and markets crude oil, natural gas, natural gas liquids (think propane), and liquefied natural gas. The latter is natural gas that’s been cooled to about -260 degrees. This makes it about 600 times smaller in volume compared to its gaseous state, making it easier to ship and store.

In 2021, ConocoPhillips generated $46 billion in sales. This is a massive increase over the $18.7 billion it produced in 2020. Obviously, we have to consider the price of oil and the pandemic, which drastically affected 2020 numbers.

But regardless, $46 billion is a big sales figure that topped pre-Covid numbers in 2019 of $32.4 billion. On that $46 billion, ConocoPhillips generated a profit of $8 billion and earnings per share of $6.01.

This year, the company is on track to crush those numbers…

Expectations are for sales to be north of $77 billion, which would be a 67% year-over-year increase. Net income is expected to more than double from $8 billion last year to $18.8 billion this year. That comes out to earnings per share of $14.32.

Again, even last year’s cash flow figure is expected to be crushed by this year’s expected $27.8 billion.

The stock is also trading on the cheap end (10 times trailing 12 month’s earnings) and only 9.5 times next year’s earnings. 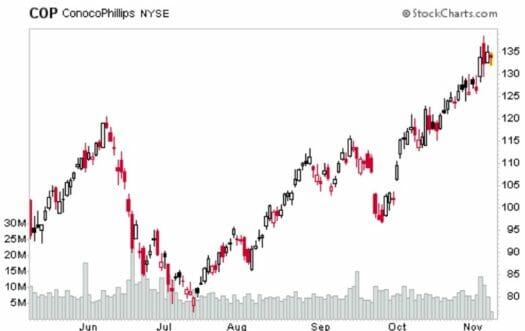 Oil prices and demand will be risks we must be watchful for. Also, any major oil production, transportation, or refining disruption, along with a major disaster, could send shares tumbling.

With that being said, I expect continued momentum for energy stocks, and COP in particular. Much like the rest of the sector, shares of COP peaked in June, sold off sharply a month later, and are now regaining their footing. The momentum should carry COP to new heights.

Over at my premium advisory, Capital Wealth Letter, I recently laid out a “big picture” case for why I’m still bullish on the energy sector (along with my top pick). I plan to share some of my thoughts in the coming days — but in the meantime, traders and long-term investors alike can’t go wrong with a pick like COP.

Editor’s Note: In the meantime, my team and I believe the “next investment frontier” in tech is about to make investors a killing…

By now, you’ve seen the headlines. The commercialization of outer space is happening… fast. And we think Elon Musk will continue to lead the charge, thanks to his latest project. It’s already rolling out across the globe, and it’s going to change the lives of millions of people (and make a fortune in the process).

But there’s just one problem… It’s currently “off limits” to regular investors… Fortunately, we’ve discovered a little-known “backdoor investment” that can get you in on the ground floor, TODAY. (Without this secret partner, Starlink will never get off the ground…)