While We Wait For A Midterm Bounce, I’ve Got My Eye On Something More Important…

Will we get a mid-term bounce this week?

Don’t worry, I’m not going to talk too much about yesterday’s elections. There is plenty enough of that everywhere else.

But a midterm bounce is rather common, although you could argue that this one may already be mostly behind us. The major averages shot higher in October as Republican candidates built a noticeable polling advantage, suggesting an optimistic market view of a congressional power shift.

That’s not a partisan statement, mind you. It’s more to do with the fact that the market tends to favor divided government — and even more than that, certainty. Consider the chart below, which shows that the S&P 500 has averaged a 16.3% return in the 12 months after a midterm election. 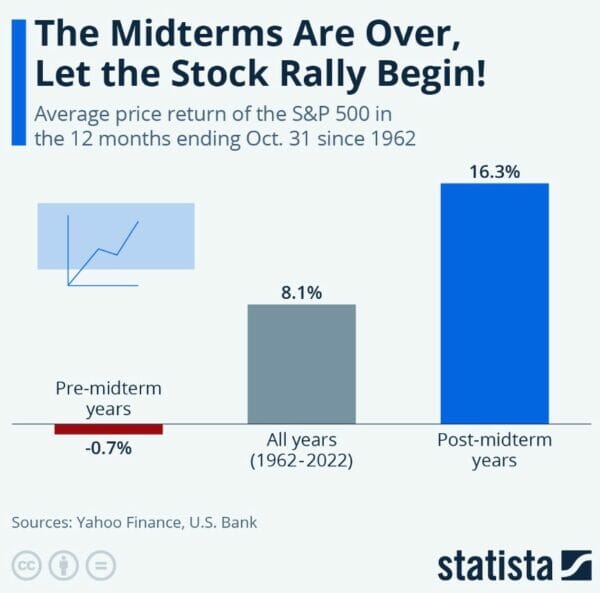 Of course, politics isn’t the main driver of stock prices. But we will be discussing the potential investment ramifications in due course. For now, there are other macro tea leaves that investors should be reading. One of those is the sudden explosion in household debt… and the heavier burden of carrying it.

The average variable credit card interest rate just hit 18.7%. It started the year at “only” 15.9%, but rates have climbed steadily since then. That’s thanks partly to the Fed, but also an influx of applications from subprime borrowers. Many experts expect annual percentage rates (APRs) to push through the 19% threshold in the coming weeks, rivaling the all-time peak set in 1991.

For those who don’t know, card rates are often negotiable (especially for valued customers with attractive balance transfer offers in the mailbox). In any case, digging out of credit card debt was already hard enough. But at today’s rates, assuming minimum monthly payments, a typical balance of $5,200 wouldn’t be paid off until sometime in the middle of the next decade.

And card balances rose by another $17 billion last quarter, according to the New York Fed.

There are currently 520 million active credit cards in circulation nationwide with $880 billion in revolving debt. That amount due has shrunk modestly over the past several years as consumers hunkered down (and relied on stimulus payments) during the pandemic. But spending patterns have since returned to normal.

(Note: The chart below from the Fed shows a larger total because it includes credit card and other revolving debt.)

In fact, many Americans are charging not just luxuries but basic essentials like utilities and groceries. While average hourly wages have ticked up 4.7% over the past 12 months, inflation has been rising at twice that pace — so the average paycheck doesn’t stretch as far. Increasingly, households are using plastic as a stopgap. According to surveys, 61% of cardholders report using credit for basic monthly essentials.

So it shouldn’t be a shock to hear that American Express and Discover have both reported a measurable increase in delinquency rates. Higher loss reserves and charge-offs will inevitably follow. Fortunately, these metrics are still at relatively benign levels and have some wiggle room. But they do show potential storm clouds on the horizon.

Meanwhile, national payrolls expanded by another 260,000 jobs last month. While hiring has cooled from the blistering pace of 500,000+ per month earlier in the year, it remains hotter than expected. The Fed hasn’t yet made convincing headway in its battle to slow the economy and curb inflation.

On the positive side, we are getting closer to the so-called “terminal rate,” at which point the Fed may finally pause its tightening and pivot to a more neutral stance. That rate was once thought to be 5%, but targets have coalesced around 5.5% in recent weeks following hawkish commentary from Fed Chair Jerome Powell.

Needless to say, all eyes will be on Thursday’s Consumer Price Index (CPI) report. The market is hoping to see some deceleration from September’s pace of 8.2%. Economists are forecasting a milder increase of 7.9%. A reading below that level could spark a powerful rally, just as a stubbornly high figure could trigger a selloff.

Throw in mixed earnings reports, and investors clearly have a lot to digest this week. Regardless of what transpires, I remain confident in the cash flows and dividends of our portfolio holdings over at High-Yield Investing.

These securities not only pay market-beating yields — but they also allow you to sleep at night, worry-free. And in my latest report, you’ll find 5 “Bulletproof Buys” that have weathered every dip and crash over the last 20 years and STILL hand out massive gains to investors. With picks like this, you can keep it simple… In fact, you may never have to worry about what the market is doing again!