As Layoffs Begin To Mount, I’ve Found A Pick That’s Bucking The Trend…

The axe is about to fall yet again.

Mark Zuckerberg, the embattled CEO of Meta Platforms (Nasdaq: META), recently announced that it will dismiss 11,000 employees. For the record, that’s about 13% of the company’s entire workforce. Large-scale layoffs of this magnitude are virtually unheard of for the tech giant. But then again, so are revenue declines.

It’s no coincidence that they are occurring simultaneously.

The parent of Facebook and other popular social media networks has produced almost nothing but growth since it was founded in 2004. But in July, the company reported a 1% dip in quarterly revenues. Investors weren’t sure what to make of the negative number – it was the first in company history. Last quarter brought another, this one an even steeper decline of 4%.

Blame it on weak user growth. Or mounting competition. Or a deteriorating digital advertising climate. All have pressured sales. Meanwhile, heavy investments in virtual reality are biting deeply into the bottom line. Zuckerberg is betting heavily that the next evolution of the internet will migrate to the virtual realm. While it may pay off in the long run, this costly venture has already led to $10 billion in losses this year.

With its stock in freefall and more challenges ahead, you can see why Meta is shrinking its workforce. To be fair, this is just the latest example of corporate belt-tightening. Many of the largest and most respected names in Silicon Valley have been handing out pink slips. Like a spreading contagion, Business Insider has characterized these mass layoffs as a “bloodbath.”

As you probably know, Twitter is cutting nearly half of its workforce. Faced with mounting losses, new owner Elon Musk is sending about 3,800 staff members away with generous severance packages. Rival Snapchat just posted its slowest revenue growth ever, prompting owner Snap (Nasdaq: SNAP) to pare back its staff by 20%.

Both companies are reeling from changes to Apple’s (Nasdaq: APPL) iPhone operating system that limits targeted ads. Speaking of Apple, the company has just laid off a hundred recruiters – suggesting a potential hiring freeze. And just this morning, according to a report from The New York Times, Amazon (Nasdaq: AMZN) announced that it will be letting go of 10,000 white-collar employees.

Elsewhere, payment processor Stripe shrunk its headcount by 1,000 workers (about 14%), acknowledging that it had “over-hired for the world we’re in.” Shopify (Nasdaq: SHOP) made a similar admission and now has 1,000 fewer positions than it did a few weeks ago.

Netflix (Nasdaq: NFLX) has eliminated 450 positions after suffering the first subscriber loss in a decade. Oracle (Nasdaq: ORCL) just terminated a couple hundred marketing execs and software developers in the Bay area. And after four rounds of job cuts, connected fitness maker Peloton (Nasdaq: PTON) is down to just 3,825 employees versus 6,700 a year ago.

In one way or another, all these businesses (and many others) misjudged post-pandemic online shopping and entertainment activity. They invested and expanded as if the boom was permanent. It wasn’t. They bit off more than they could chew – hence these painful “adjustments.”

When costs must be realigned, slashing payroll is typically one of the first options. Reductions to the advertising and marketing budget are another. For ad-driven companies like Meta and Twitter, that’s a double whammy. Needless to say, none of this bodes well for tech sector earnings over the next few quarters.

But if widespread layoffs are a bearish sign, then the reverse is also true. A hiring binge can be a bullish vote of confidence.

That’s why it’s worth noting that UPS (NYSE: UPS) is bucking the layoff trend in a big way. The package delivery giant is hosting 600 hiring events from Atlanta to Minneapolis with the ultimate goal of adding 100,000 workers. The company is bringing in droves of additional warehouse loaders and delivery drivers at starting pay rates of $16 to $30 an hour and up to $6,000 in sign-on bonuses.

Most of these are seasonal positions (although thousands will graduate to full-time employment). And myriad other retailers and logistics companies are beefing up for the busy fourth-quarter rush. But most are showing some degree of caution. For example, Walmart (NYSE: WMT) is hiring just 40,000 seasonal workers this year – down from 150,000 last year. 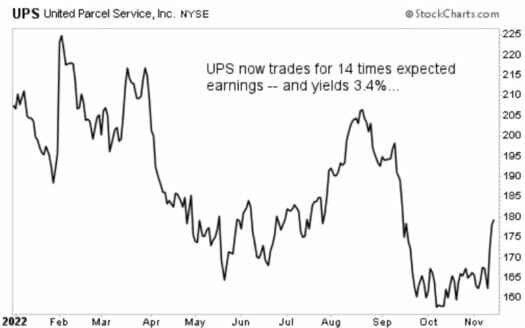 While inflation and other macro factors may temper overall 2022 holiday spending, e-commerce sales could set yet another record. According to the National Retail Federation (NRF), digital spending in November and December could rise 12% to $267 billion. Get ready to see a lot of brown delivery vans dropping off packages.

Even on a slow day, UPS delivers more than 20 million packages globally. And the company just reaffirmed a number of ambitious full-year targets – including $100+ billion in revenue and superior returns on invested capital (RoIC) north of 30%. Few businesses in any industry generate cash as efficiently, which explains another impressive on-time delivery track record: dividends.

After a hefty 50% hike in February, UPS will dish out $5.2 billion in well-covered payments to stockholders this year. 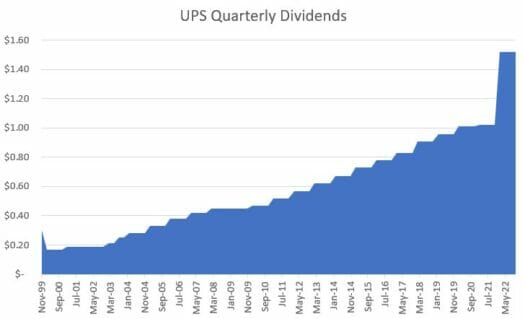 And while profit margins are at the highest level in a decade, the shares are certainly not, having fallen by more than 25% from their January peak – boosting the yield to twice the S&P norm. But that overdone selloff may have run its course. Given the market’s newfound appreciation for stability and income, expect this reliable performer to show its mettle.

While the yield on UPS doesn’t quite meet the threshold for inclusion into my premium portfolio over at High-Yield Investing, the stock looks like an intriguing option for investors right now.

In the meantime, if want to know how to get your hands on my absolute favorite picks, then you need to check this out…

In my recent report, I’ve identified 5 income payers that I consider to be “bulletproof” — meaning they have a documented track record of holding up during any market, and raising payments year after year.