A few weeks ago, I wrote about a group of under-the-radar stocks that reward their shareholders in a way that most people have no idea even exists.

These extra payments are dished out openly and uniformly to all shareholders. But they are irregular and non-recurring. So by definition, they are considered “special,” not ordinary. As such, these distributions aren’t reflected in the yields you see quoted on popular financial sites like Yahoo or Morningstar.

There’s no special trick or complicated system to capturing these dividends — you just have to know where to look.

If you owned Equity Residential (NYSE: EQR) in September 2016, then you know exactly what I’m talking about.

The real estate company had just sold 23,000 apartment units in a blockbuster transaction that netted $5.3 billion in proceeds. After due consideration, management decided to return this financial windfall to stockholders via a special dividend in the amount of $3.00 per share. This payment was in addition to the regular scheduled quarterly dividend of $0.50 per share.

In other words, this bonus distribution was equivalent to disbursing the next six quarterly payments all at once. So in one day, investors were showered with more cash than they would ordinarily have received in 18 months.

How would you like to get your next six paychecks advanced to you in one lump sum? That’s what happened here.

Except this special payment didn’t replace those ordinary dividends. They would still be coming just the same — this was an extra, one-time distribution.

A Windfall Of Income

A decade ago, special dividends were few and far between. But that all changed at the end of 2012. Fearing a potential dividend tax hike the following year, 175 different companies shelled out extra cash in November and December to “beat the clock.”

Casino owner Las Vegas Sands (NYSE: LVS) was one of those, returning $2.4 billion in house winnings (or $2.75 per share). Department store owner Dillards (NYSE: DDS) made a generous payment of $5.00 per share. These were just two of dozens to make special distributions during that 60-day span totaling $14.6 billion.

Granted, this was a period of unusually high activity. But it ushered in a new era. Today, special dividends remain a popular way for companies to give a little something back — if you can call a few billion dollars “little.”

Barely a week goes by when I don’t see at least one or two announcements of upcoming special payments. They don’t get much fanfare. You probably wouldn’t even notice unless you have your ears glued to the ground like I do.

But they are happening all the same. Retail. Telecom. Utilities. They can come from almost any sector.

A couple years ago, I uncovered a $132 million special dividend from a tiny Canadian mining outfit called Lucara (OTC: LUCRF). Several months before, the company unearthed a monster 1,111-carat gem (dubbed Lesedi La Rona) at a diamond mine in Botswana. It was the second-largest diamond ever found, worth an estimated $70 million.

This find and many other high-grade stones helped fund a special dividend of $0.35 per share. That was 23 times greater than the regular quarterly dividend — and equivalent to 12% of the share price at the time.

This is hardly an isolated example.

Citing a “strong balance sheet and favorable access to credit markets,” discount retailer Costco (Nasdaq: COST) handed out a special dividend of $3.1 billion, or $7.00 per share. With the regular quarterly payments set at 50 cents per share, this payment in May 2017 was like getting 14 dividends at once.

Some distributions are even larger. In August 2019, aircraft parts supplier TransDigm (NYSE: TDG) delivered a whopping one-time cash payment of $30.00 per share.

Of course, not every company that pays a special dividend will be a viable investment candidate. To be honest, some are sketchy. But there are plenty of attractive, financially sound businesses that have embraced this method of rewarding stockholders, including Dish Network (Nasdaq: DISH), Best Buy (NYSE: BBY), and Microsoft (Nasdaq: MSFT).

Why Special Dividends? (And A Look At My Favorites…)

So, where does the cash come from? Occasionally (when funding is cheap), it is borrowed. In other cases, management is preparing for a corporate restructuring or returning the proceeds from an asset sale. That was the case with National Grid (NYSE: NGG). The U.K. utility giant recently unloaded some non-core gas distribution operations. That divestiture paid for a hefty special dividend of $5.42 per share (8.2% yield).

But these special dividends typically come from retained profits built up on the books.

These distributions are generally random and sporadic. But not always. Some “serial payers,” as I refer to them, have a stated policy of regularly returning surplus earnings, often in the form of a year-end cash bonus.

Because operating conditions vary from year to year, the size of these payments will depend on the success of the business — the bigger the profit, the bigger the special dividend.

So what can we infer about these repeat offenders? Well, first off, it’s clear that they are run in a shareholder-friendly fashion. Furthermore, we know they are generating ample cash… enough to run the business, pay a regular dividend stream, and still have excess to distribute for most years.

Considering ordinary dividend-payers have consistently outperformed the market for decades, it shouldn’t come as a surprise to hear that special payers (which go above and beyond) tend to produce superior returns. Many of the stocks I keep tabs on have outrun the S&P 500 by a comfortable margin over the past five years. A few others, meanwhile, look like compelling bargains right now… 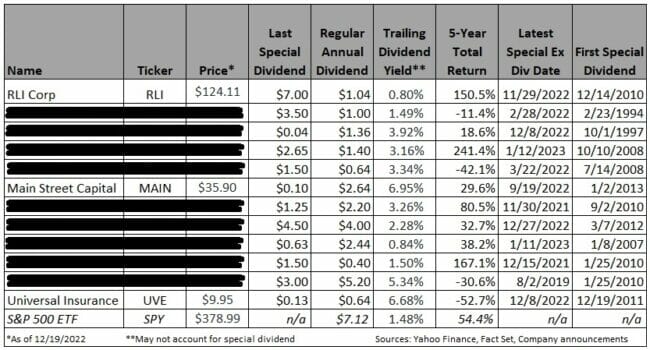 Now, I can’t share all of the names in this table out of fairness to my High-Yield Investing subscribers. But I’ve unmasked a few just to give you an idea. And don’t forget, I’ve already written about two of my favorites — Universal Insurance (NYSE: UVE) and Main Street Capital (NYSE: MAIN) — here and here. (I plan to discuss another longtime favorite — RLI — in a follow-up piece.)

The point is, these businesses have almost nothing in common but their penchant for paying out supplemental distributions. I can’t say that these special dividends deserve all the credit for their superior returns — but they certainly didn’t hurt.

But if you’re an income investor who’s looking for a little “extra,” special dividend payers are a great place to start.

In the meantime, if you want to know about my absolute favorite high-yield picks, you need to check out my latest report…

In it, you’ll find 5 “Bulletproof Buys” that have weathered every dip and crash over the last 20 years and STILL handed out massive gains. And each one of them carries high yields, with dividends that rise each and every year. Go here to check it out now.