I hate to say it, but sometimes there are unfortunate trends out there that can be really appealing as a long-term investor.

You see, it’s no secret that diabetes is growing at an alarming rate. But some of the statistics surrounding diabetes are just staggering.

According to the Centers for Disease Control and Prevention (CDC), 37 million people have diabetes in the United States. That’s over 11% of the population.

It also may surprise some of you to learn that diabetes is the 7th leading cause of death in the United States.

Knowing that, it should be no surprise that the global drug and device market for diabetes has also seen rapid growth. And one company riding the tailwinds of this unfortunate trend include DexCom (Nasdaq: DXCM), a company headquartered in San Diego, California.

DXCM is one of my favorite picks for this trend as a long-term investor. But the stock is very tradeable, too.

For someone with diabetes, the products DexCom provides are an absolute must. It provides continuous glucose monitoring (“CGMs”) systems to individuals and healthcare providers.

To understand why it’s important to monitor one’s glucose, we need to cover a little Diabetes 101…

The Basics Of Diabetes

When we consume food, specifically carbohydrates, our body breaks it down into simple sugars (mostly glucose) that circulate in the bloodstream. The pancreas produces insulin, which helps the sugar flow into our muscle cells and other tissues, which is used for energy.

In short, after meals, the pancreas pumps out insulin to regulate any glucose in our body.

In Type 1 Diabetes, the pancreas produces little or no insulin. Without insulin, there’s nothing to usher the sugars into the cells or signal that they should be converted to fat. Therefore, sugar builds up in the bloodstream (known as “hyperglycemia”). High blood sugar damages the body and causes many symptoms and complications.

Type 1 diabetes is less common than Type 2, but there is currently no known cure, and it must be treated. Everyone with Type 1 diabetes — more than 1.6 million Americans — requires regular insulin injections.

Type 2 Diabetes — also known as adult-onset diabetes — typically develops in middle-aged or older people due to obesity and lack of physical activity.

With type 2 diabetes, cells don’t respond normally to insulin — known as “insulin resistance.” To get those cells to respond, the pancreas produces more insulin. As this vicious cycle continues, the pancreas eventually can’t crank out enough insulin, and your blood sugar rises. This leads to prediabetes, which most likely turns into type 2 diabetes.

Now that we have a basic understanding of diabetes, we can discuss how DexCom is changing the game regarding checking and tracking glucose levels.

A “Game-Changer” For Diabetes Monitoring

Perhaps you’ve seen someone with diabetes pull out a little monitor and lancing device. The lancing device pricks the finger to get a drop of blood to put on the test strip of the meter. The meter then analyzes the blood and reveals the blood glucose level.

The downside of this method (outside of having to prick your finger for blood) is that this reading only gives you a snapshot of your glucose level at that point in time. It doesn’t tell you if it’s going up, going down, or what’s happening. It simply reads the blood at that moment in time.

With DexCom’s system, users place a tiny sensor on their abdomen. The sensor is barely noticeable and can be worn for up to 10 days. Users can shower with the device on, work out, and essentially resume a normal life. This sensor measures glucose levels just beneath the skin. It takes measurements every five minutes and sends real-time readings wirelessly to a receiver, so the user can view the information. DexCom’s newest devices are compatible with “smart” devices such as iPhones and or Apple Watches. 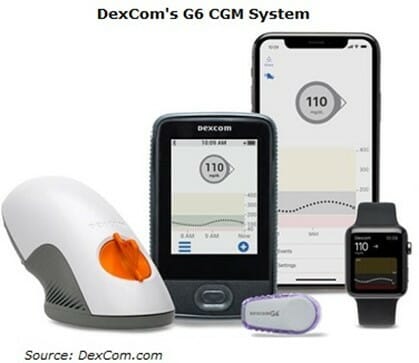 The beauty of this device is that it provides glucose levels at regular intervals and tells users in which direction and how fast their glucose levels are heading. After setting customizable glucose level thresholds, it’ll alert users if they’re at, above, or below their ranges. This allows users to make better treatment decisions and reduces the risk of hypoglycemia.

Furthermore, users can invite up to five people to follow them and easily monitor and track their glucose levels — great for parents and doctors to keep tabs. This real-time, dynamic glucose reading gives those with diabetes insight into their glucose levels, rate, and direction of change, allowing for proactive management of the condition.

Since launching its first wearable, multi-day system in November 2009, DexCom has been on a tear. In 2010 — its first full year after its launch — the company reported $48.6 million in revenue. In 2021, the company generated more than $2.4 billion in sales. And it is on track to do nearly $3 billion this year.

Last year’s net income was $155 million, and that’s projected to jump to $336 million this year. DexCom generated more than $442 million in cash from operations, and that figure is expected to come in at over $691 million this year. A smooth 56% improvement.

I’ve followed this space — and DexCom — for a handful of years now. And to put it bluntly, this has been a wild stock.

For a company that has grown sales at a five-year compounded average growth rate of 34%, been profitable since 2019, and churned out positive free cash flow for over eight years… one might think the stock would have a relatively steady rise with the usual ups and downs along the way. 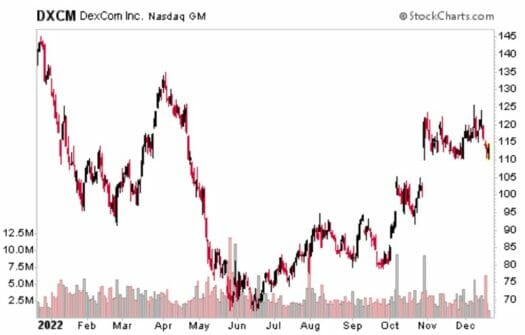 Most recently, the stock tumbled roughly 60% from its November 2021 peak to its June 2022 lows. But the stock has since made up some ground, although it’s still down about 25% from its highs last fall.

The point is, this stock has proven to be quite volatile. Should DXCM there be any hiccup in sales or earnings, investors will probably sell it off mercilessly. But for now, the stock’s momentum has picked back up — and it may be time to hop on board.

When this stock goes on a tear, it generates some solid returns. As you can see, the stock is already up about 68% since that June low. And it could just be getting started.

P.S. If you’re looking for an investment with true “game-changer” potential, then you don’t want to miss this…

I’ve been researching the “next investment frontier” in tech for the past few months. And I’m convinced this is the next big thing…

I’m talking about the commercialization of outer space. It’s not as crazy as it sounds — in fact, it’s already happening. Companies are scrambling to win the race, and I’ve discovered a unique “backdoor” way we can gain exposure. And if we’re right, it could lead to some of the biggest gains of our lives.