That phrase was first uttered by Julius Caesar following a victorious battle. Fittingly, the iconic Caesar’s Palace owner may not stop expanding its real estate empire until it has conquered the entire Las Vegas strip.

If you’re a longtime reader, then you probably know I’m talking about VICI (Nasdaq: VICI), one of my favorite real estate investment trusts (REITs).

VICI owns dozens of casino properties, Caesar’s Palace and the Las Vegas Venetian. To clarify, it doesn’t run the casinos but simply leases the land and structures to experienced operators.

This is why I’ve been calling VICI “The Casino’s Landlord” for years.

For those who don’t know, most REITs own land or buildings and make money by renting these spaces to individuals or businesses. You can read this article for more basic info about REITs. But the important thing to know is that REITs are required by law to pay out 90% of their income as dividends to shareholders. In return, REITs are not subject to corporate income tax. That explains why income investors love REITs — they pay some of the richest dividends around.

The casino landlord has taken control of numerous mega-resorts over the past 18 months. The Venetian came first, followed by Luxor, Excalibur, New York, New York, and a dozen other properties via the $17 billion acquisition of MGM Growth Properties.

Then, the company struck a deal to take full ownership of the MGM Grand and Mandalay Bay. It currently has a 50.1% majority stake in these two resorts, while the other half is owned by Blackrock in a joint venture. VICI is buying out Blackrock’s interest for $1.3 billion in cash plus the assumption of debt.

These two lavish casinos anchor the south end of the strip, occupying 226 prime acres. MGM Grand is the largest single hotel on the planet, containing 6,852 rooms. Meanwhile, Mandalay Bay has brought the South Pacific to the Nevada desert with a lush 1.6 million gallon tropical beach lagoon.

The rent on these marquee properties is a princely $300 million per year. VICI has been splitting that income stream 50/50 with Blackrock, but now be depositing the full sum. There are 27 years remaining on the triple-net lease, which has an automatic annual rate escalation clause ensuring that future rent keeps pace with inflation.

Recent accretive deals have already paved the way for a healthy 9% dividend bump. This latest transaction is also expected to boost per-share earnings once finalized. For its part, Blackrock will walk away with a $700 million net profit after just three years – a large payoff, even in a city known for extravagant wagers. 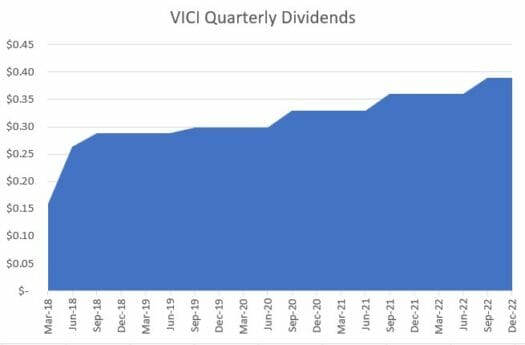 A Boom In Casino Deals

There have been a number of deals in the casino/gaming space in recent years.

As mentioned earlier, VICI just acquired MGM Growth Properties, which ceded ownership of iconic Mandalay Bay and New York-New York. A real estate subsidiary of private equity group Blackstone has bought both the Bellagio and Cosmopolitan resorts in Las Vegas. EPR Properties (NYSE: EPR), another REIT, has dipped its toes into these waters with a stake in the Resorts World Catskills casino outside of Manhattan.

But we could be in the early stages of deals like this. There are roughly a thousand casinos in the United States. And while all of them won’t necessarily be attractive targets, gambling legalization efforts are gaining steam across the country — so there will be more properties to acquire in new territories.

What’s in it for the casinos? It’s simple, really. These sales are part of a broader “asset-light” strategy. The plan is to monetize brick-and-mortar assets (which can be capital-intensive). Then, it will focus strictly on the operating side of the business. That includes a new emphasis on sporting events and other live entertainment. 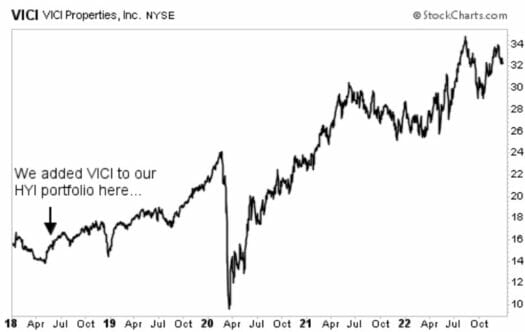 With crowds returning in record numbers, Nevada’s monthly gaming wins have surpassed $1 billion for twenty consecutive months, good news for VICI’s tenants. And in this case, what’s good for the tenant is usually good for the landlord.

VICI has gone from IPO to S&P 500 member faster than any real estate investment trust (REIT) in history. I continue to rate this 4.8% yielder a “buy” as we head into the New Year.

P.S. Tired of settling for the low yields offered by the average S&P 500 stock? I’ve just released a list of “bulletproof” high yield picks for 2023 (and beyond)…

If you want to spend less time worrying about your portfolio and whether or not you’ll have the income you need, then you need to check out this report.