After A Rough Year, History Is On Our Side Heading Into 2023…

With the holiday hustle and bustle behind us, I wanted to take just a few moments to briefly look back on 2022 before we eagerly dive into the opportunities presented in 2023.

As you know, inflation surged to a 40-year peak last summer, forcing the Fed to abandon its ultra-loose monetary stance and take action. The era of dirt-cheap money finally drew to a close, giving way to one of the most aggressive rate-tightening cycles in decades. 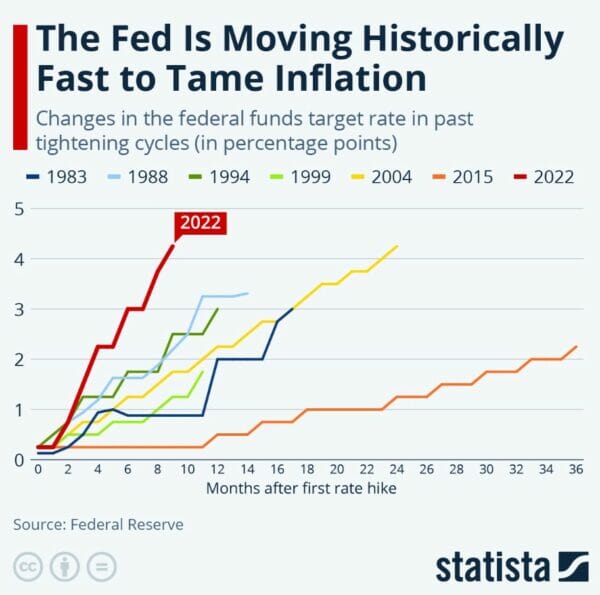 Acquisitions. Expansion projects. Stock buybacks. These growth catalysts have all been fueled by debt over the past few years. And why not? Historically low borrowing costs have lowered the hurdle to borrowing money (or tapping the capital markets) and deploying the proceeds in higher-returning ventures.

Seven consecutive rate hikes have raised those hurdles significantly, dampening investment activity. Overextended balance sheets have spooked the market, to say nothing of recessionary fears. According to FactSet, corporate earnings are expected to have declined 2.8% last quarter.

Against this backdrop, the benchmark S&P 500 suffered a painful pullback of 19.4% last year. The tech-heavy Nasdaq (which includes some of the biggest imbibers at the debt-spiked punchbowl) was punished even more, plummeting 33.1%. 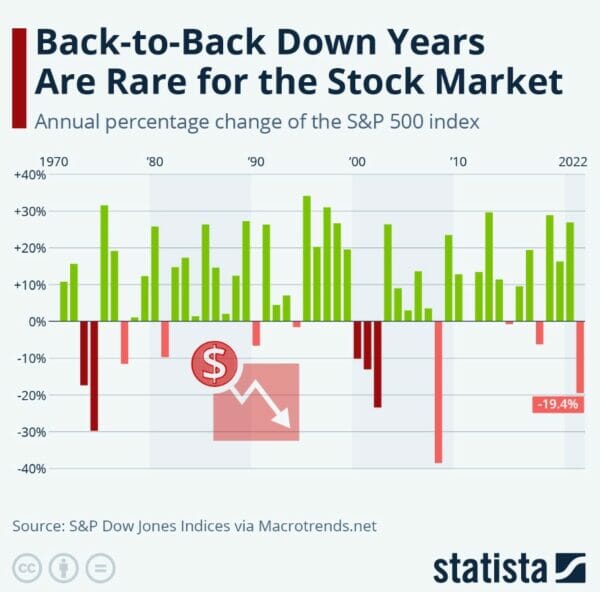 We’ve only seen four selloffs of this magnitude since the 1950s, most recently during the early stages of the pandemic panic. Keep in mind, these are just broad indexes. Hundreds of individual stocks shed more than half their value last year. A few slogged through their worst year on record, including PayPal (Nasdaq: PYPL) and Facebook parent Meta Platforms (Nasdaq: META).

Considering small, fast-growing companies are naturally predisposed to being M&A targets, our Takeover Trader portfolio wasn’t immune to this collapse. Let me be candid: we took some lumps.

For example, I thought we would see Paramount Global (Nasdaq: PARA) gobbled up by a larger rival in the streaming wars (or perhaps a tech giant). But it has been an outright laggard, sinking from the mid-$30s into the teens. Blame it on the intensifying streaming wars, which led to a negative $343 million EBITDA in the firm’s Direct-To-Consumer segment last quarter. Rival Disney has also struggled, with shares sinking to a near 50-year low.

But again, there is reason for optimism. Paramount Pictures just brought six No. 1 films to theatres, including Top Gun: Maverick. Paramount+ has also attracted 4.6 million net subscribers over the past year (tops among all streaming platforms) and reported stellar 95% revenue growth, even with sluggish advertising spending.

Looking ahead, the media sector is ripe for consolidation. The founder of Hulu and former CEO of WarnerMedia recently went on record in the Wall Street Journal predicting “two or three major mergers and/or acquisitions involving entertainment companies in the coming 24 months.”

That’s not to say it was all bad. Many of our holdings held their ground during this fierce selloff and outperformed the market. In fact, a number of our holdings actually finished 2022 in the green.

Our upscale grocery chain pick bucked the overall downtrend and delivered a positive return of 9%. And with a wave of consolidation happening in the grocery business, the best could be yet to come.

When I originally made this pick, I thought PXD would be a good-sized fish for an even larger larger fish to swallow (one of the big oil majors). But we watched PXD grow right before our eyes to the point where it may simply be too big. Not that we’re complaining, though… The stock’s performance in 2022 brings our total return to 175%. 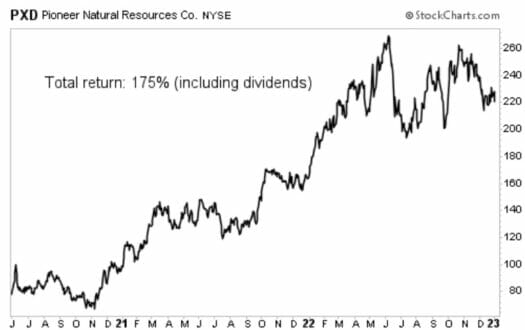 Let’s be clear, 2022 was disappointing. But considering we just endured one of the most vicious bear markets in the past half-century, I’m pleased with the performance of many of our holdings over at Takeover Trader.

We won’t be spending too much time licking our wounds. Not only is rate tightening winding down, but history is on our side.

I mentioned above that there have been four pullbacks of this scale. In every case, the S&P rebounded the following year – bouncing 23.5% on average. Market tailwinds aside, I’ve already got my eye on several undervalued targets that are attracting attention from both the market and potential buyers.

Stay tuned. In the meantime, my team and I have prepared a special presentation on the Mother of All Oil Booms, and the number one stock that’s set to profit…

Time is running out for deep-pocketed buyers to scoop up the last remaining small players in this region. And this small company is sitting on prime acreage right in the heart of the boom, right on top of one of the largest finds I’ve ever seen.

By getting in now before the bidding war breaks out, investors have the chance to pocket triple-digit gains, practically overnight.