Recently, the United States Postal Service unveiled plans to purchase 66,000 brand-new electric delivery vans by 2028. Initially, the agency planned to upgrade its aging fleet with mostly gas-powered trucks, citing the lack of funding for an electric conversion. But that decision brought swift condemnation from the White House.

It would seem Postmaster General Louis DeJoy has now reconsidered, thanks largely to a $3 billion grant from taxpayers – a provision of the Inflation Reduction Act of 2022. This sweeping piece of legislation enacted by Congress over the summer has few mechanisms to accomplish its stated goal of tackling inflation, but it does set aside $369 billion to advance climate change initiatives.

Love it or hate it, this massive cash infusion is now the law of the land – bolstering the green economy. The bill is expected to dramatically expand the nation’s renewable power generating capacity, adding 950 million solar panels and 120,000 wind turbines by 2030. It will also bend consumer behavior by dangling hefty rebates for energy-efficient home appliances and up to $7,500 in tax credits for purchasing new electric vehicles (EVs) built in North America.

The USPS was among the first in line, tapping these funds to procure 60,000+ electric vans. For perspective, the 125-acre ocean of parking lots at Disney World’s Magic Kingdom can only accommodate 12,000 vehicles. Multiply that by five.

My first thought upon visualizing this vast field of electric vans: that’s a lot of copper.

The EV Boom Is Only Just Beginning…

Of course, this isn’t really about the mailman. That’s only the latest data point. Consider the following…

Hotel shuttles. Taxi cabs. Municipal mass transit systems. I could go on, but hopefully, you get the point. And commercial/government vehicles are just icing on the cake. Everyday consumers are starting to warm up to plug-in vehicles in record numbers. What was once a niche market reserved mainly for the wealthy is rapidly becoming mainstream.

Tesla still leads the way, but almost every major legacy automaker has rolled out battery-powered models with an eye on the future. Ford, Nissan, Mazda, Honda, Mercedes, BMW… Jaguar is eliminating gas-powered vehicles entirely and plans to be fully electric by 2025. Toyota will make the conversion by 2040.

While the initial uptake was slow, electric vehicle sales have ramped up the past few years. Americans drove 79,000 new EVs off dealers’ lots last month, bringing the year-to-date total to 816,000. For the record, that’s a sizeable 7% share of the U.S. auto market versus 2% just a couple years ago.

This movement was underway long before President Biden signed the Inflation Reduction bill. But generous tax credits have spurred demand and accelerated this transition. And keep in mind, adoption rates are even higher across much of Europe and Asia.

Globally, electric vehicle sales soared 107% in 2021 to reach 6.9 million. That total swiftly crossed the 10 million mark for the first time in 2022, representing a growing 17% chunk of the worldwide market. As I write, automakers worldwide are now delivering more than 1 million EVs per month.

But the most explosive growth still lies ahead. Over the next 10 to 15 years, governments in France, Japan, China, and elsewhere expect gradual phase-outs (and some outright bans) on gasoline and diesel vehicles. We’ve crossed the tipping point. By 2040, gas-powered vehicle production will have ceased altogether in some countries — and EV sales could top 50 million units yearly.

This Is Great News For Copper (And Other Metals)

Needless to say, this revolution wouldn’t be possible without mountains of raw materials. You likely already know about lithium, which is the lightest of all metals and has twice the energy storage density of previous chemistries like nickel cadmium – an ideal combination for battery makers.

Cobalt is another key beneficiary. The dense blue metal is used as a stabilizing agent to prevent corrosion and fires in battery cathodes. Considering it can account for nearly one-quarter of the raw material in a battery, the ongoing electrification of the automotive market spells huge demand. I see rising demand for nickel and molybdenum as well.

But this story begins and ends with copper. After centuries of looking, we still haven’t found an affordable, malleable, ductile, rust-proof material that is a more efficient conductor of heat and electricity. At least for the price. (Silver actually works better but costs about 100 times more).

There are miles of copper wiring and pipes in your home. You’ll also find it in cookware, computers, boats, musical instruments, and air conditioners. They’re probably even in the doorknobs in your local doctor’s office – thanks to its natural antimicrobial and antiviral properties.

From construction to telecom to machinery to electronics to power transmission to telecom, there are countless industrial applications for the red metal. Consumption patterns can even act as a thermometer to diagnose the global economy’s health. They call it “Doctor Copper” for good reason.

But the biggest catalyst is taking place on the roads. Conventional cars and trucks require a fair amount of copper, but EVs are loaded with three to four times more than internal combustion vehicles, according to S&P Global. A battery-powered vehicle’s motor and electrical system contains between 130 and 200 pounds of copper. (The graphic below from the International Copper Study Group is in kg, but its estimate for Battery Electric Vehicles — 83kg — translates to about 182 lbs.) 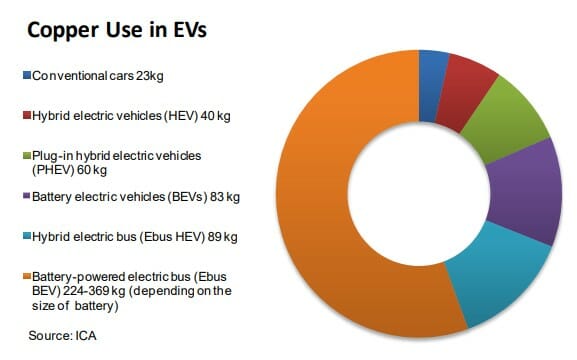 Now multiply that by 10 million vehicles coming off the assembly line this year. And even more next year. The White House’s goal is for EVs to capture 50% of the domestic auto market by 2030. Foreign markets could be even further along the curve by then, translating into tens of millions of additional units of incremental demand.

And that’s only part of the clean energy economy. In a future piece, I plan to circle back to the renewable power push and the implications for copper. (For now, I’ll give you the short version: If we’re going to decarbonize, we can’t do it without copper.)

In the meantime, my colleague Jimmy Butts and his team have just released a report of “shocking” predictions for 2023 (and beyond)…

In this presentation, you will learn about the research and analysis th

at went into these forecasts — and the specific investment opportunities that can help you reap exceptional profits from each one of these predictions.