How “Zombie” Stocks Can Be Dangerous — And How To Avoid Them

On March 15, 2018, an iconic American business announced it was closing up shop for good. By summer that year, it had boarded up the doors and windows of its 1,600 stores. About 30,000 employees lost their jobs.

And just like that, Toys “R” Us was no more.

Granted Toys “R” Us wasn’t publicly traded. But it provides a blueprint of a bigger and darker threat that could send shares of many major American companies to zero — especially if recent threats of a recession come to pass.

It happens to businesses of all sizes and statures.

Most people don’t see it coming until it’s too late… they’re usually what are called the “bag holders.”

A “bag holder” is an investor who rides a stock lower and lower, possibly even into bankruptcy.

They hope for the day a stock turns around, but it may never happen. They stubbornly hold, coming up with all sorts of reasons and excuses, right up until the day the stock is worthless. They’d rather sacrifice their most valuable asset (time) before they’re willing to admit a mistake and move on to greener pastures.

This can be absolutely devastating to your overall portfolio. I’ve seen it happen time and time again. Too many people hold on to “hope” — as in hoping for the day the stock returns to its previous level just so they can break even.

But that day never comes.

Now, I don’t want to be an alarmist. But bear markets can last longer than most people think. And if a recession comes along, then things might have to get worse before they start getting better.

If that happens, you can bet there will be plenty of bag holders…

Now, the idea of riding a stock all the way down to zero may sound extreme (you’d be surprised). Instead, what often happens is people end up holding stocks that simply go nowhere. They could stay in business for years or decades, but shareholders don’t earn a dime on their investment.

You could argue that these stocks are perhaps even more dangerous than stocks that go to zero. After all, most of us can spot a company that’s in deep trouble. And if not, then the media and analysts on Wall Street usually can.

But these stocks, on the other hand, are tough to spot. They’re like the “living dead” — they seem fine at first glance, but they’re barely going anywhere. That’s why I like to call them “zombie” stocks.

How “Zombie” Stocks Can Be Dangerous

To understand what I mean, I’m going to use an example I’ve talked about many times. In fact, longtime readers may accuse me of using it as a “whipping boy” — but it’s kind of deserved.

The iconic blue-chip stock, International Business Machines (NYSE: IBM), is a great example of a Zombie stock. Investors who purchased shares of IBM 10 years ago are “up” just 11%. That’s downright terrible. In fact, once you account for inflation, they’ve lost money. 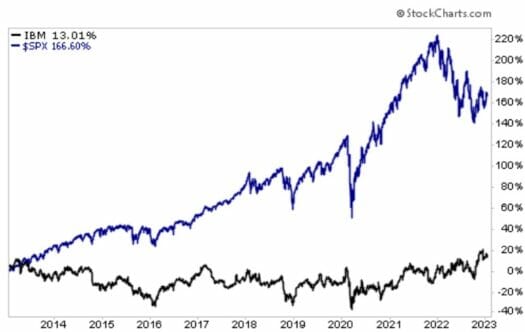 You could have invested in a “safe” 7-10-year Treasury Bond ETF and earned an easy double-digit return over that same time frame.

The bottom line is that you don’t want to be holding these loser stocks when you could be putting your money to work elsewhere. That’s why I created a list of 7 “loser” stocks in a special report for my Capital Wealth Letter subscribers a couple years ago — and update it each year.

Believe me, you want to be sure you don’t own any of the companies on this list. They are the worst of the worst.

When I started tracking zombie stocks a couple of years ago, I didn’t realize just how bad some of them would do. For example, topping that original list was a Covid-19 darling Zoom Video Communications (Nasdaq: ZM).

While Wall Street was going gaga over the stock, I told people to not only avoid it — but avoid it like a housefire. Here’s how the stock has done over the last two years… 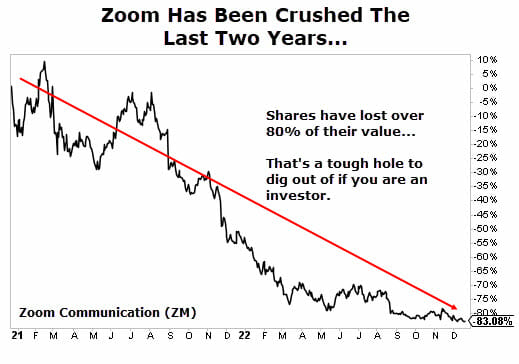 This isn’t a one-time occurrence either… other stocks on the list included:

Most generate no profits or cash flows. Others have bloated balance sheets. Some could even go bankrupt. And even if they don’t meet that criteria, they will still likely earn you a pitiful return over the coming years.

The names I mentioned above are probably still a no-go. And to get my most recent, updated list, you will have to be a premium member of Capital Wealth Letter.

One thing to keep in mind. None of this means you should sell shares of these companies short. But just make sure you avoid them at all costs.

The bottom line is that you don’t want to be a bag holder. And you don’t want to be holding a zombie stock when you could put your money to work elsewhere. This is why I always stress the importance of holding your picks loosely. Don’t be afraid to cut bait if a stock isn’t performing up to your expectations.

In the meantime, my team and I have just released a report of “shocking” predictions for 2023 (and beyond)…

In my latest presentation, I’ll tell you how you can receive an in-depth report that reveals the research and analysis that went into these forecasts. I also describe the specific investment opportunities which can help you reap exceptional profits from each one of my predictions.