The Lone Ranger was a big fan of silver.

He named his horse after the shiny metal and fashioned bullets out of it. If werewolves ever threatened Wild West homesteaders, I’m sure the masked man and Tonto could’ve taken care of them.

Lately, silver bulls probably feel like the Lone Ranger — with the emphasis on the “Lone.” With the recent correction in precious metals prices, silver has been pounded extra hard. 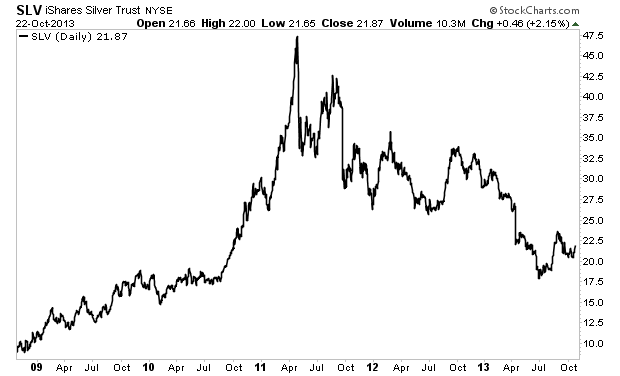 Since its top in mid-2011, iShares Silver Trust (NYSE: SLV), which tracks the price of silver, has slid more than 50%. Compare that with the gold tracker iShares Gold Trust (NYSE: GLD), which has given back less than 30%. Why?

Secondary trades like silver are often afterthoughts for investors. When the price of the popular asset class seems to bid up, buyers will violently pile in to a cheaper alternative. The cheaper the investment, the higher it climbs. They are also punished more severely when things go south. But as always, the herd, in its infinite lack of wisdom, is missing a major point: Silver is useful outside of being a currency proxy.

Recently, I discussed a short-term trading idea for GLD  based purely on technical indicators and the fact that gold as an asset class is extremely oversold. The situation with silver is very similar. 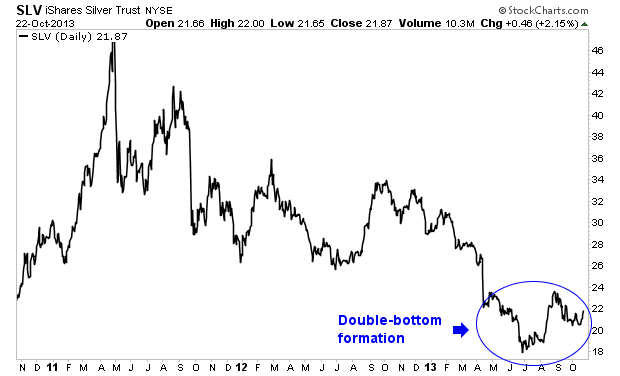 #-ad_banner-#From a technical standpoint, shares of SLV have put in a very clear double bottom, which in technical analysis constitutes an extremely bullish signal.

But while I called for a similar bounce in GLD shares and then a drop, look for SLV’s run to be sustainable. Here’s why.

Unlike gold, silver has many industrial applications. One of the most important areas is electrical power. As a plentiful, non-corrosive metal, silver is widely used as a contact component in manufacturing high-grade electrical switches and circuit breakers.

Let’s examine that sector from 40,000 feet up. Granted, the U.S. homebuilding industry is sluggish, dampening demand for electrical components. In emerging markets, however, upgraded housing is built as consumers move up to the middle class, increasing the need for components.

Also, as emerging countries expand, so do their power distribution systems. That’s in addition to the fact that pundits have been calling for an upgrade to the U.S. electrical grid for years. When this long-awaited push finally occurs, it could well be on a massive scale.

Risks to consider: Outside of being a short-term trade, investing in SLV is a long-term contrarian play. Like the GLD correction, the SLV sell-off is motivated by fear and concerns that the Federal Reserve’s long-term quantitative easing program will keep interests rates and inflation suppressed indefinitely, thus making any mobility in hard currency prices difficult. Once the gain from the technical bounce is achieved, SLV may move sideways for a while until the market’s awareness of the industrial demand catches up.

Action to take –> SLV shares are attractive just below $22. Expect a 45% rally to around $32 to follow suit with a technical bounce in gold over the next 12 months. However, shares should hold their value thanks to increased global economic growth and the need for silver as an industrial component. That being said, shares could rise to $42 over the long term. That’s a total return of 90%.

P.S. A select group of miners has been absolutely battered this year — but now it’s time to start looking for bargains. We don’t have the space to share all the details with you here, but once you see it, we think you’ll see the appeal of these bargain mining stocks. Click here to learn more.