Goldilocks is famous for being very particular about her porridge. It couldn’t be too hot or too cold. It had to be just right.

That reminds me of mid-cap stocks: Not too big, but not too small — just the right mix of growth and stability.

Unlike small caps, mid-caps are multi-billion-dollar companies and sometimes even market leaders. That provides these companies with a nice touch of stability that small caps with values dipping below $1 billion usually don’t offer.

But unlike global mega-caps such as Exxon Mobil (NYSE: XOM) and Microsoft (Nasdaq: MSFT) worth hundreds of billions and long past peak growth, mid-caps valued between $2 billion and $10 billion still have the ability to grow many times over in the long run.

These unique qualities have made mid-caps popular with investors looking for a balance between growth and stability. They have also produced market-crushing gains. In the past 12 years, the iShares Core S&P Mid-Cap ETF (NYSE: IJH) is up 223% against the S&P 500 Index’s 62% return. Take a look at the big gain below. 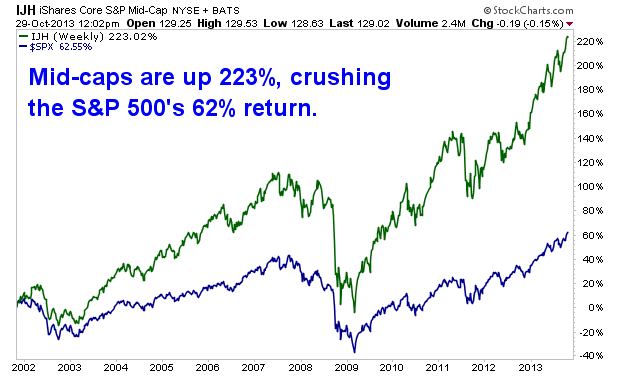 These mid-caps are also in position to benefit from the “post-earnings drift,” which is the tendency for stocks that beat earnings to keep rising for 12 weeks after a positive earnings surprise.

That makes this a great time to check out these seven mid-caps that just crushed third-quarter earnings expectations.

From the group, I have chosen to highlight Toll Brothers (NYSE: TOL) for its bullish growth projection and Wendy’s (Nasdaq: WEN) because of its long-term potential as it continues to execute a turnaround.

Toll Brothers
One of the country’s leading homebuilders, with a market cap of $5.7 billion, Toll Brothers has been cashing in on the housing recovery, with shares up a market-crushing 87% in the past two years. But in spite of those big gains, Toll Brothers still has plenty of room to grow.

Toll Brothers is focused on the high end of the housing market, where it faces little competition and its consumers tend to be less sensitive to economic fluctuations. It also focuses on wealthy, urban locations where land is in limited supply and high demand, recently landing new locations in New Jersey, New York City, Philadelphia and Washington, D.C.

With interest rates once again heading lower and Toll in position to further benefit from the recovery in housing, analysts are bullish. The 2013 consensus estimate is calling for earnings growth of 34% followed up by 86% growth in 2014. That has TOL trading with a forward price-to-earnings (P/E) ratio of 41. But when factoring the 86% growth projection for 2014, the P/E ratio falls to 20.

Wendy’s
Wendy’s is even more of a turnaround story. After years of slow sales growth and underperformance, management has been executing a strategy to revitalize its brand. That includes selling its ownership of Arby’s, closing underperforming stores, upgrading existing store and designing a new logo. The results of this transformation were so strong in 50 test stores last year that Wendy’s has scaled its plans up to 200 test stores in 2013.

Long term, Wendy’s has plans to refurbish 50% of company-owned restaurants and 20% of total stores by 2015. Wendy’s also has plans to add more locations, with management saying it expects it can add another 1,000 restaurants in underrepresented markets, a 15% increase from the current 6,500.
The good news has the consensus estimate calling for 46% earnings growth in 2013, 19% in 2014 and annual earnings growth of 21% in the next five years.

Risks to Consider: Toll Brothers will remain sensitive to the housing recovery and trajectory of interest rates. Wendy’s faces continued intense competition in the fast-food industry, and high input costs for ingredients are also a threat to margins.

Action to Take –> Mid-cap stocks offer a great combination of growth and stability. But these seven are hitting hard on the growth front, reporting earnings that handily beat expectations.

P.S. How would you like for your portfolio to be able to beat the stock market while spending just 12 minutes a month on your investments? Sound crazy? That’s the objective of Amy Calistri’s Stock of the Month advisory: Provide one quality stock pick each month, with in-depth analysis in plain English that investors can understand. For all the details, click here to see her special presentation now.