How to Profit From Our Nation’s Greatest Growth Industry

With each passing quarter, Wall Street analysts tweak their forecasts and price targets, trying their best to predict what a company’s sales and profits will look like three or six months from now.

That myopia has led them to miss out one of the greatest long-term success stories in the U.S. economy.

It isn’t found in the engineering labs in Silicon Valley or the canyons of Wall Street. Instead, it’s in places like Iowa, Nebraska, Texas and Pennsylvania. That’s where our nation’s most dynamic export opportunities have emerged on vast tracts of arable land. Consider this stat: The U.S. exported $29 billion in corn, wheat, soybeans, apples, pistachios and many other farm products in 1985. A decade later, that figure had doubled, and by 2010, surpassed $115 billion. 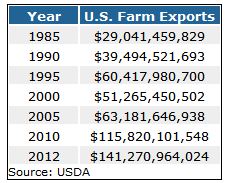 The U.S. also imports many farm items as well. But in 2012, the farm belt ran a $38 billion trade surplus. How many industries can say that? And there’s no reason to expect this trend to reverse course. Simply put, heavy investments in technology have enabled our farmers to become the most productive in the world. Here’s a look at three companies that should prosper in the years ahead as farmers invest even more heavily in technology and other productivity enhancers.

Risks to Consider: Policymakers in Washington have created a great deal of noise in the farm belt, thanks to delays in the passage of the next major farm bill. Extended delays could lead farmers to hold back on discretionary purchases, hurting sales of Lindsay, Agco and Titan Machinery.

Action to Take –> Though farmers have the occasional bad year, the long-term trends, led by robust export growth, appear quite appealing. All three of stocks have pulled back from their highs, providing an attractive fresh entry point.

P.S. America’s farm belt provides much more than food — it also provides a growing share of America’s fuel supply. In fact, a bizarre plant from the Midwest could help end America’s dependence on foreign oil altogether — and one company is especially well positioned to profit. Click here for more information.