Did Icahn Blunder With This Refiner? Not So Fast

Legendary activist investor Carl Icahn has had a tremendous run. In recent years, he’s made a quick fortune on many of his investments, thanks to a combination of savvy stock-picking and occasional cage-rattling.#-ad_banner-#

But even Icahn has an off day.

Earlier this year, he bought 6 million shares of oil refiner CVR Refining (NYSE: CVRR) just as the entire refinery industry was at a multi-year peak. Shares were trading above $30 when Icahn bough CVR, though as I cautioned in this mid-summer article, refinery stocks subsequently took it on the chin as pricing spreads narrowed between Brent crude and West Texas Intermediate (WTI) crude.

Although other refiners such as Valero (NYSE: VLO), HollyFrontier (NYSE: HFC) and Marathon Petroleum (NYSE: MPC) have stabilized or risen since I wrote that piece, Icahn’s pick has really fallen out of bed. The fund manager is now sitting on a 28% loss on CVRR. 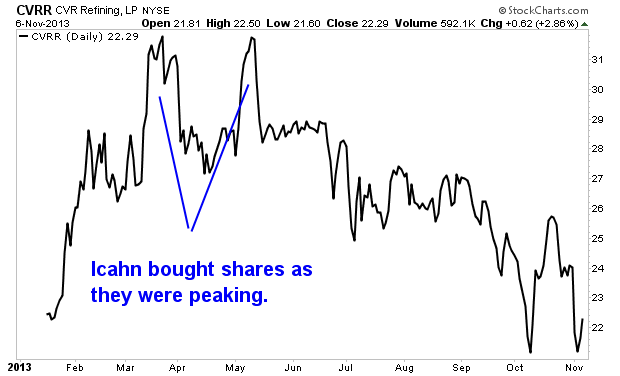 At this point, Icahn shouldn’t think of selling CVRR. Instead, he should be backing up the truck, as better days lay ahead, both in terms of potential gains and the projected divided yield.

A Perfect Storm
As I noted this summer, refiners were hurt by a narrowing spread between Brent and WTI crude. In CVR’s case, that meant that the profit per barrel fell from $33 a year ago to $8 a barrel in the third quarter. The good news: Those spreads have widened again. As this piece in MarketRealist.com notes, the WTI-Brent spread is at its widest since March. 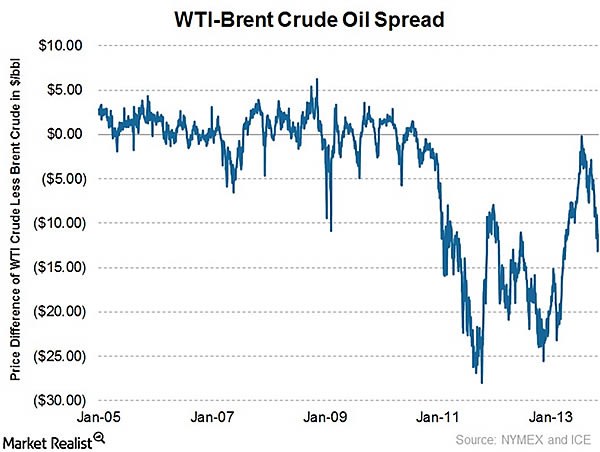 And signs are pointing to those spreads holding, or even expanding from current levels. That’s because the U.S. is pumping out increasing amounts of oil, which is leading to rising oil inventories.

Not only will higher inventories push WTI prices even lower (widening those spreads with Brent crude), but they are setting the stage for a surge of refinery exports which is already underway, as this WSJ article notes.

The Damage Is Done
Of course, little of this was in evidence when CVR slogged through a tough third quarter; Those narrowed spreads were compounded by a shutdown at one of CVRR’s two refineries as a major component failed and took a long time to fix.

Unlike most refiners, CVR is structured as a master limited partnership (MLP), and the tough quarter meant a very weak dividend payout. CVR had paid an average of nearly $3 a share in MLP units in the first six months of this year, but the payout fell to just $0.30 in the third quarter. That explains why the share price fell so sharply, even as other refiners began to rebound.

In the current quarter, look for that payout to rise back toward the $1 mark. Assuming normal operating conditions and stable WTI/Brent spreads, the payout is likely to approach the $4 to $5 range next year. Not bad for a $22 stock.

Assuming even that scenario is aggressive, and the dividend stabilizes at just $3 (which would be below this year’s payout, in a year that was characterized by a major refinery outage), this stock is still a bargain. If shares settle at a price that reflects a 7% to 8% yield, then investors would be looking at a $36 stock, or more than 50% above current levels.

That price target, by the way, represents the 52-week high for this stock. The potential to lock in a current yield at double-digit rates with that kind of upside should prove to lure investors back into this beaten-down refiner.

Risks to Consider: Gasoline inventories have been rising in recent months, pushing down prices at the pump, and if gas prices fall even more from current levels, then CVR’s margins will be crimped.

Action to Take –> With production back up to prior levels, the WTI/Brent spreads once again widening, and Europe taking more of the U.S.’s refined products, CVR should see smoother sailing ahead. This is a volatile industry, so the company’s performance will likely be erratic, which makes this less appealing than many of the steady-as-she-goes pipeline MLPs. But the current share price represents a compelling entry point in the context of this refiner’s typical cash-flow generation.

P.S. Want to know how to beat the performance of investing gurus like Icahn, George Soros… or even Warren Buffett? With a new system from StreetAuthority’s Michael J. Carr, it’s possible. In his free webinar, Michael shows investors how to leverage the holdings of nearly two dozen legendary investors to easily beat the market… or even the gurus themselves. For more information and to watch this free webinar, click here.