Is The Bull Market Overheated? This Disconnect Says Yes

While I am not a “perma-bear” by any means, I must admit that I’ve been perplexed by this unrelenting, “to the moon” bull market, which hasn’t really cooled off since it began over five years ago.

#-ad_banner-#New highs are the norm now, with the market shrugging off bad news and eating up any bit of good news. Nearly every index is outperforming, many without so much as a small pullback here and there.

But notice that I said “nearly” — one index group in particular has recently cooled off, which makes me think that others could follow suit by the end of this year.

I’m talking specifically about indices made up of stocks with smaller market caps.

It’s well known that small-cap stocks perform better than their larger counterparts over time, especially coming out of a recession, when growth is easier to come by. However, when the market slows down and investors turn to large-cap stocks for stability and dividends, small-caps are the first to get snubbed.

Any downturn following that peak often sees small-caps getting beaten up at close to the same rate they grew in the first place.

In the five years between when this bull market began in March 2009 and March of this year, the S&P 500 Index has delivered a return of over 165% — impressive by most anyone’s standards. However, compare that with the Russell 2000, a widely used barometer for the U.S. market’s smaller participants, which posted a 222% gain in the same period. 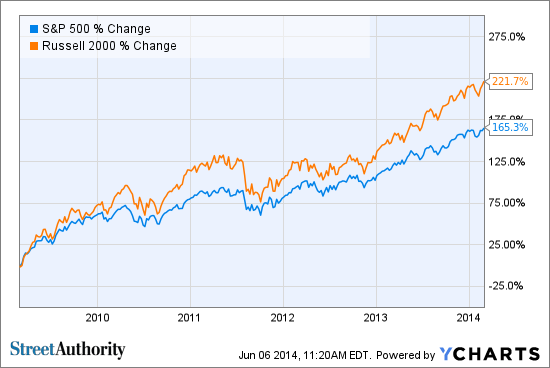 What could be the cause for this decoupling?

Many are citing the extremely high valuations some of these small-caps are stuck with now, given their meteoric rises in stock price. Price-to-earnings (P/E) ratios have exceeded those during the tech bubble days in some cases, sparking concerns that a pullback is inevitable.

Large investors like hedge funds and other asset management firms have been taking note. In April, these investors sold nearly $3 billion in futures contracts against the Russell 2000, the largest amount relative to average levels since 2004, according to Bloomberg and Bank of America.

Outflows from the iShares Russell 2000 Index (NYSE: IWM) are consistently registering large alerts week after week, while some hedge funds are piling into puts on the exchange-traded fund. For instance, billionaire Paul Singer of Elliott Associates has disclosed a $424 million put position in IWM, with countless other investment firms joining him in his views.

Risks to Consider: Keep plain old volatility in mind. The weekly and monthly peaks and troughs of small-cap indexes are much more jagged and distinct than the smooth rise of the S&P 500, so larger swings are to be expected.

Action to Take –> While I’m usually an advocate of buying the dips, this disparity between large-caps and small-caps might mean it’s time to take profits on some of your small-cap funds or investments, particularly if they are trading at sky-high P/Es. Just as they were the fastest to rise, they will likely be the fastest to fall in a market turnaround.

An eccentric Texas woman who dodged the 2008 financial collapse says the market is ripe for a pullback. This is the same analyst who’s produced annual returns of up to 510% and has picked winning investments roughly 85% of the time. To learn how she’s protecting her portfolio today, click here.