GoPro: Should You Buy It?

When Nick Woodman, founder and CEO of GoPro (Nasdaq: GPRO), appeared on “60 Minutes” last November, his company’s fate was sealed.

#-ad_banner-#​That segment showed a variety of amazing feats you could accomplish with the company’s ruggedized, miniaturized wearable digital camcorders — and it led to a huge spike in orders for the company. That led Woodman to realize that the buzz around the company was so loud that it was time to start preparing for an initial public offering (IPO).

Fast forward to June 26, 2014, and GoPro’s public debut has marked the company as one of the hottest — and perhaps most controversial — new issues on the market.

For investors looking for a piece of the action, a classic conundrum has emerged: Do you buy the hot IPO in expectation of robust price appreciation in the years ahead as sales grow — or do you hold off and wait for the air to come out of the stock?

After all, some hot IPOs soon reverse course. Remember that Facebook (Nasdaq: FB) opened for trading above $42 — and was below $20 just a few months later. Moreover, short sellers appear to be circling GPRO as anecdotal reports suggest that there are few shares left to borrow for short positions.

Thus far in its short life as a public company, GoPro still has upward momentum: 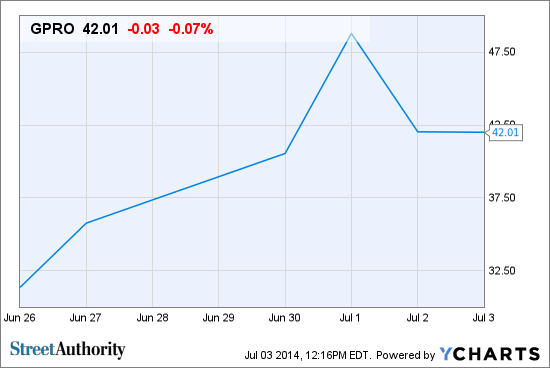 Before assessing the stock, let’s look at GoPro’s operating fundamentals.

The company had sold 4.7 million cameras in its brief history up until the end of 2012 before selling another 3.8 million last year, equal to 87% sales growth. The company had $235 million in sales in the first quarter (which is seasonally weak), and 2014 total sales will likely exceed $1.5 billion this year, up from $986 million last year.

Is that sales target conservative? Too aggressive? Analysts will weigh in with their earnings models after the 25-day quiet period ends, and the company may also provide full-year guidance around that time when second-quarter results are released. We may not really know about 2014 growth rates until next winter, as GoPro derives more than a third of its sales during the fourth quarter.

The good news: GoPro is already profitable. The bad news: It’s unclear that profit margins will be all that great.

The company’s first-mover advantage gives it decent pricing power now, but rival camcorders are likely to deliver cameras with similar functionality at lower price points. The company lays claim to more than 40 patents, with many more pending. But it’s hard to see how rivals won’t develop workarounds that skirt the company’s base of intellectual property.

And therein lies the conundrum for investors: Is GoPro just a camera company, or is it a game-changing social media/hardware company?

The answer will be determined by whether shares will ultimately be valued like a commoditized producer of hardware (which is typically worth 1 to 1.5 times sales) or a leading-edge tech firm that can justify a valuation of 5 or 6 times sales. (Right now, shares are valued at around 5.5 times trailing sales, and perhaps 3 times projected 2015 sales).

To get the new-age sizzle that justifies a higher multiple, GoPro needs to quickly cultivate revenue streams beyond camera sales. The company plans to showcase ad-supported videos, and in a best-case scenario, would become a destination like Twitter (NYSE: TWTR) or Facebook, but for adrenaline junkies who like to shoot selfies.

In some respects, the move to develop a GoPro social media platform could greatly help the perception around this stock. Heavy spending to build out that part of the business will consume all of the company’s profits — and sometimes, investors are actually more gratified to see a still-unprofitable firm that can’t be measured by a P/E ratio than a marginally profitable firm that sports a sky-high P/E.

For investors, there are a few other things to consider in assessing this unique business model.

For instance, GoPro has established itself as a very savvy developer of products while pursuing a rock-solid marketing and branding strategy. For some investors, such skills will earn a lot of goodwill, as the company will presumably be able to stay on the leading edge. (Still, as noted, it’s hard to see how the core camera can maintain technology leadership, despite the patent base, in such a commoditized field).

The company’s efforts to build a compelling social media platform is crucial for investors that think this company is merely being built to be sold at a higher price. More than 2 million people subscribe to GoPro’s YouTube channel (albeit with little advertising monetization off of that base right now).

Clearly, a large installed base of sticky customers will lure the likes of Google (Nasdaq: GOOG), Facebook or Yahoo (Nasdaq: YHOO), all of which gladly pay huge premiums to acquire hot properties. Then again, a company like Google, Samsung or Apple (Nasdaq: AAPL) may already be developing a GoPro rival, and if such news leaked out, shares of GoPro would take an instant hit. (GoPro spent nearly $30 million on research and development in the first quarter, a fraction of what the major tech firms spend on R&D.)

In the near term, GoPro will need to deliver a knockout second quarter (in a month or so) to maintain investor interest. To get a rough sense of what to expect from GoPro over the next six to eight quarters, we can look at the early public histories of Facebook and Twitter.

After heavily hyped IPOs, both of those firms initially struggled to generate revenues from their sizable audiences. Facebook eventually learned how to better monetize its base, and hopes are rising that Twitter may also finally be doing a better job on that score.

If those histories are any guide, then GoPro may stumble badly in coming months if it is slow to develop a robust advertising model around its website — but once it learns the tricks of the trade, then shares could stage an impressive snapback rally.

Action to Take –> For shares to move higher, a lot has to go right for GoPro: Camera sales need to keep rising at a very fast clip; the company needs to start proving its ability to generate ad revenues off its social media platform; and major tech firms can’t make any noise about delivering similar products. Considering the impressive early gains this stock has already registered, those risk factors might just be too great to justify buying shares now. Instead, this is a stock to track, one that would hold greater appeal at prices closer to its IPO price. Few had the patience for such thinking in the early days of Facebook’s and Twitter’s debuts, but patience proved to be a virtue with those stocks as well.

If GoPro’s potential has you excited, wait until you see the truly “game-changing” trends Andy Obermueller has been working on. Andy has identified five trends with the potential to revolutionize the way we live our lives — and make early investors a killing. To learn more about these developing technologies — and the companies behind them — follow this link.