Growing up I swore to myself that I never wanted to be a rancher or farmer — moving irrigation pipe, caring for cattle, bucking bales of hay — needless to say the work was strenuous.

But the older I get, the more I find myself yearning for the back-breaking work and solitude that comes with the gig. Luckily, I still have a close connection to it. Growing up in a tiny village in the northwest, ranching and farming is — next to mining — probably the largest employer. And my father keeps a pulse on the agriculture business, as it directly affects his business.

So I do my best to pick his brain about happenings in the agricultural business. And when we recently talked I was particularly interested in what was going on in the corn and wheat sectors. What he told me was exactly what I wanted to hear…

Right now, there’s a ton of supply in the corn and wheat markets. Thanks to exceptional growing conditions this year.

In its most recent report, the United States Department of Agriculture (USDA) announced corn production came in at a record-high 14.5 billion bushels. And this is how it’s been all year… This news has caused corn prices to plummet: 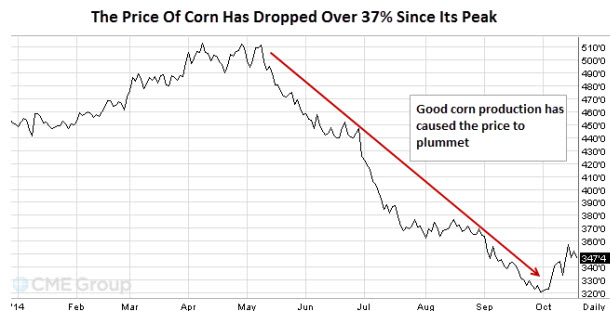 It was this freefall that caught my attention. That’s because I think conditions are ripe for a rebound in both corn and wheat prices — especially for corn. And it’s all thanks to an aspect of commodities investing that I doubt many investors know about. But if you can grasp the idea, you’ll make a killing.

I’m talking about the idea of “price floors.”

As is the case for most commodities, corn and wheat prices are significantly influenced by supply and demand. It’s basic economics. When there’s an overabundance of supply, prices crash. When there’s excess demand, prices soar.

As I said, I think both wheat and corn look primed for a rebound in a big way. But I’ll be focusing only on the current set-up for corn in today’s issue. (Keep in mind that wheat is following in the footsteps of corn).

Thanks to near-perfect weather and growing conditions, we’ve seen two consecutive bumper crops in the United States, which sounds like it would be great news for farmers, but there’s just one problem. All of this excess corn has greatly exceeded demand, causing prices to plummet 37% in the past five months. In fact, prices were as low as $3.47 per bushel in recent weeks.

Now here’s where a “floor” for corn prices comes into play. In the conversation I had with my dad, he mentioned that farmers typically don’t make much money under $4.25 per bushel. I think he’s right. According to this article that ran in the Wall Street Journal in July, it’s about $4. Either way, we’re now below that price.

So bottom line, corn farmers aren’t making any money. Soon, they’ll have to cut back production or they’ll be forced to grow other, more profitable, crops instead.

#-ad_banner-#When this happens, corn prices have to go up. That’s the great thing about commodities. Investing in things like corn, wheat, gold or oil isn’t the same as investing in shares of other companies in the stock market.

Most commodities aren’t going anywhere. They won’t be replaced by a new product or technology — for instance we will always need corn and wheat. And if you can spot where the “floor” is for these commodities — meaning, when price dips below the cost of production — you can make a lot of money.

Another reason prices could skyrocket has to do with demand.

So far, corn production has outstripped demand. But as I mentioned, sooner or later, farmers will need to switch to other crops. That will certainly help with the demand side of the equation on its own, but there’s another factor at play.

Around this time of year, cattle are shipped to the stockyards to get fattened up for slaughter. The majority of cattle are shipped to Nebraska and fed corn. With corn prices so low, this is great news for ranchers. This means they’ll have cheaper feed, and you can bet they’ll be more than happy to take as much cheap corn off of the hands of farmers as they can.

And finally, now is a good time to pull the trigger on corn because we’re finally starting to see an uptrend. As you can see from the chart below, it looks like prices may have bottomed. We’re now up about 8% from that level. 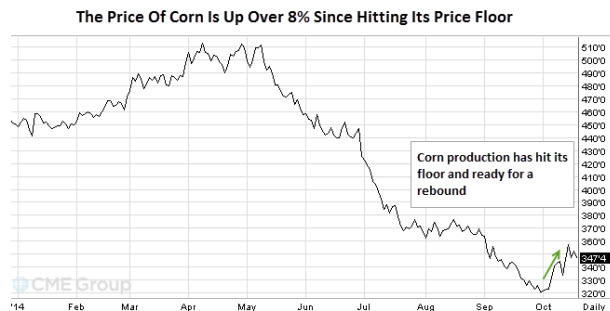 So to summarize, we have three catalysts for betting on a corn rebound:

1) Prices have fallen over 37% in the past five months. They’re hated. Farmers are at risk of losing money at current prices, so they’re bound to cut back on production soon.

2) Once farmers switch to other, more profitable crops, supply will dwindle. In the meantime, cattle will also eat up some more of the supply

We have three ways we can play this trade. You can buy shares of the iPath Dow Jones-UBS Grains Subindex Total Return ETN (NYSE: JJG), which is a “one-click” way to gain exposure to both corn and wheat. (JJG does have exposure to soybeans, which have also tanked.)

We can’t say for sure how much prices could soar, but I think it could be substantial. Once you’re up 20%, go ahead and take your profits. I don’t expect this trade to last longer than 6 months. I also recommend a tight 10% stop-loss to ensure that if this trade goes against us, you won’t get burned too badly. Of course, prices could go up higher than 20%, but commodities markets can be fickle, so let’s not get greedy.

StreetAuthority’s Scarcity & Real Wealth is your best source for commodity and natural resource insights. For more information about how to gain access to the latest commodity investment trends and ideas, click here.