The Biggest China Play Is A Bet On The American Consumer

Ask most investors where the next big consumer story will be and the answer is usually China. More than 400 million shoppers went online last year in the world’s second largest economy, more than the entire U.S. population. Besides natural growth in middle-class buying power, the government is doing all it can to transition the economy to a model fueled by consumer spending.

There’s a lot to like about companies that can sell into the Chinese consumer theme — but uncertainty over the country’s economic growth is destroying sentiment even on strong long-term potential. The Global X China Consumer ETF (NYSE: CHIQ) is 35% off its 52-week high and just 13% above the all-time low.

#-ad_banner-#What if there were a company that would be one of the biggest long-term beneficiaries of the China consumer story but that had hidden exposure to the developed U.S. consumer story to boot? What if that same company was becoming indispensable to its main competitor, a critical part of the supply chain for one of the competitor’s fastest growing segments?

The company exists and its shares are on sale.

This Pick Gets Huge Support From Amazon And The American Consumer
Fulfillment by Amazon (FBA) delivered more than one billion items in 2015, an increase of 50% on the prior year. Cross-border sellers using FBA grew by more than 100% during the year. FBA is one of Amazon’s (Nasdaq: AMZN) fastest growing services and it’s recently expanded it to Mexico.

If you’re at a loss about what this means for a Chinese consumer company, FBA is Amazon’s logistics management service for online retailers. Retailers ship their inventory directly from the manufacturer to Amazon fulfillment centers globally and Amazon holds the inventory and ships the product when a sale is made.

I sourced two guides on FBA and talked to a contact running an FBA-training academy. Guess what source is almost universally recommended for finding inexpensive (translation: Chinese) manufacturers to produce and ship your FBA products to Amazon? Alibaba Group Holding (NYSE: BABA). The company is living up to its slogan, “Global Trade Starts Here,” as a powerhouse in international commerce.

Amazon’s success in FBA and drop-shipping is taking Alibaba along for the ride.

Besides strong support from the American consumer, Alibaba is positioned in the largest long-term consumer story in the world. The Chinese government is intent on shifting the economy to a consumption model and has recently unveiled tax breaks that will put more money in people’s pockets. The Finance Minister recently unveiled proposed income tax deductions for mortgage interest, education expenses and childcare expenses. The country will also be shifting to a Value-added Tax system in May that will include other deductions to spur consumer spending.

Nearly 419 million Chinese consumers went online to buy something last year and spent more than $672 billion, nearly twice as much as U.S. online spending in 2015. Retailing researcher eMarketer projects that China ecommerce will reach $1.97 trillion by 2019, annual growth of 31% and nearly four times expected 2019 spending of $534 billion in the United States. Growth won’t stop there as it’s expected that only 52% of China’s population will be shopping online by 2019 from 37% today. 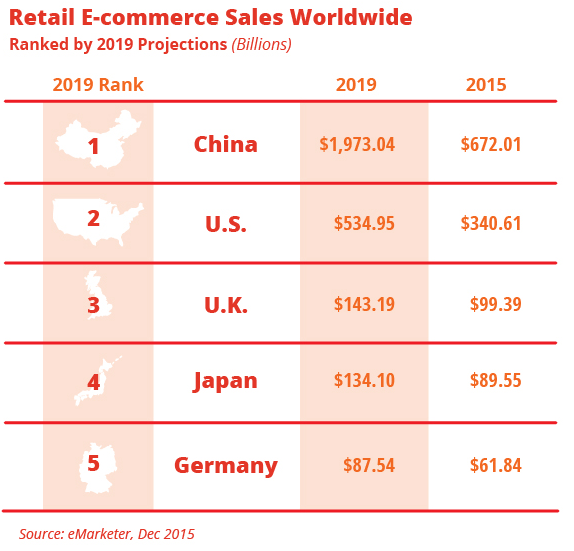 Alibaba controls more than 80% of the China online retail market, a position that is so entrenched that even Amazon has opened a store on Alibaba’s domestic ecommerce platform Tmall.

The selloff in Chinese stocks has taken Alibaba shares lower but sales growth is still intact. Alibaba is expected to grow sales by 32% to $100.4 billion this year, above expectations for sales growth of 21%, to $130 billion, at Amazon. The company has $18.5 billion in cash (10% of the market cap) and added $7.6 billion in free cash flow last year.

Risks to Consider: Investor sentiment for Chinese stocks broadly could hit Alibaba over the short-term though longer-term fundamentals will win out eventually.

Action to Take: Take advantage of an attractive valuation and huge sales growth that benefits from Chinese and American consumer spending with a position in Alibaba. Not only does Alibaba stand to benefit from spending on both sides of the Pacific Ocean but shares are priced at just 17.6 times trailing earnings, a valuation of 1/25 that of Amazon’s 455 times earnings. If 2016 earnings meet expectations for 25% growth, the shares could be worth $90.53 without any multiple expansion. My target of $92.50 is based on expectations for earnings growth and a multiple of 18.0 times earnings.

Editor’s Note: One of our experts has done something unusual. She’s created a retirement portfolio with only dividend-paying securities. Has she taken income investing too far? Click here to decide for yourself.