Proof The Oil Rally Is Over

The price per barrel of West Texas Intermediate crude oil (WTI) has jumped 15% in the last month and is nearly double its February low. The first agreement for an OPEC production cut in 15 years has sent energy prices and stocks soaring.

But has the energy market really shrugged off the problems that sent crude to a 13-year low?

#-ad_banner-#There’s evidence that non-OPEC producers may be getting ready for the second great boom in production. That could force OPEC’s hand and send oil prices into another downward spiral.

Energy stocks have surged higher on the relief rally but I’ve found two that still carry dangerous amounts of debt. Another drop in crude and investors could be in for a rude awakening.

OPEC Becomes The Shale Drillers’ Best Friend
Oil prices jumped again this week when more non-OPEC countries agreed to cut 2017 production and Saudi Energy Minister Khalid Al-Falih said his country would cut further below where it had agreed in the late-November agreement.

OPEC and a group of non-OPEC members including Russia agreed last month to a combined cut of up to 1.5 million barrels per day from their current production levels. The announcement sent the price of WTI up 12% in one week, the biggest weekly gain in nearly six years.

The bounce in energy prices is not likely to last though. In fact, evidence points to another production boom coming in 2017.

The production agreement doesn’t include the producer heavy-weights in the United States, China, Canada, and Brazil that supply more than 40% of the world’s crude. With the price of crude at an 18-month high after the announcement, many drillers took advantage to lock in prices on 2017 production.

Exploration and Production (E&P) companies release their hedging activity with a quarterly delay, but pricing activity in the futures market suggests massive selling to cover next year’s production. A record 580,000 crude options contracts traded on the day of the OPEC announcement, with puts to sell crude hitting the highest level since 2012.

There was so much forward selling of oil contracts after the OPEC announcement that the futures curve has turned to backwardation, a phenomenon where so many long-dated contracts are sold that earlier-dated crude is more expensive than crude delivered further out. It’s a rare occurrence and suggests massive producer hedging activity. 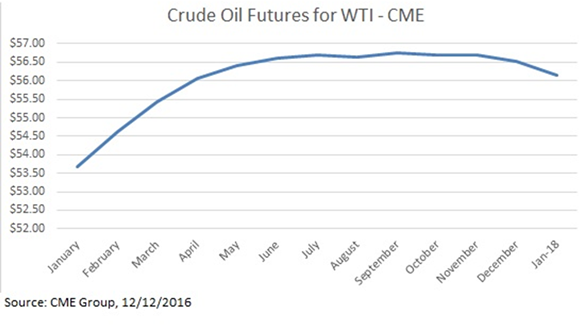 Shale producers in North America may be getting ready for a big production jump next year at prices locked in to the mid-$50s per barrel. The North American rig count has jumped 78% since its May low and the price of crude is now well above break-even for many regions.

A production increase by non-OPEC players could throw a wrench in the OPEC-led production agreement. The cartel and Russia grudgingly agreed to lower production on the idea that higher prices would mean still higher revenue on fewer barrels. But higher North American production could weigh heavily on prices and the cartel is likely to realize it only subsidized foreign shale producers.

Lower revenue could lead many OPEC members to once again increase production and compete for market share, causing prices to tumble. Former Saudi Arabia Oil Minister Ali al-Naimi admitted to Bloomberg last week that, “There’s not much you can do if there is no maximum cooperation between producers,” and that members have had a tendency to cheat on agreed cuts in the past.

Even the historic production cut may not be able to rebalance a market that has been oversupplied for years. Global oil production has outpaced demand by between one and two million barrels a day since 2014.

These Drillers Still Aren’t Out Of The Woods
While E&P and oil services companies have benefited from the rebound in prices since February, many still carry dangerous amounts of debt on the books. Another significant drop in oil prices could rekindle fears of insolvency within the sector, causing investors to rush for the exits.

Murphy Oil Corporation (NYSE: MUR) has good assets in the Eagle Ford region and in Malaysia but has had trouble turning its exploration spending into successful wells. Shares have jumped 136% since the February low but the company is still barely able to pay interest on its debt.

Earnings before interest, taxes, depreciation and amortization (EBITDA) only covered interest expense by 1.3 times over the trailing 12 months and the company lost $989 million in free cash flow. That is a sizeable amount for a company with a market cap of just $5.7 billion and $5.3 billion in long-term debt.

Halcón Resources (NYSE: HK) emerged from its Chapter 11 restructuring in September, wiping out $1.8 billion in debt and transferring 96% of the equity ownership to creditors. Even after the restructuring, the company is still saddled with over $1 billion in debt and free cash flow has been negative in two of the last four quarters. The company’s El Halcon assets break even with prices around $50 and significant assets in the Tuscaloosa Marine Shale will not be profitable until oil reaches $55 a barrel.

Both of these companies are still dangerously over-leveraged. Investors are enjoying a rebound on the potential the companies may avoid financial meltdown but any drop in oil prices could see new lows in the shares.

Risks To Consider: Stronger economic growth could help support oil prices even if production increases, meaning that the weakest names in the space could get a lifeline.

Action To Take: Hedge your exposure to energy stocks through shorts on some of the industry’s weakest players or just avoid them altogether.

Editor’s Note: The 21st century’s most valuable commodity​ could generate millions in profits! It’s everywhere, in everything from cell phones and handheld games to solar panels and pharmaceutical drugs. And prices are set to soar! Check out our 10 most shockingly profitable stocks of 2017…