This Sector Will Suffer From Rate Hikes — But We’ll Profit. Here’s How…

A rising interest rate environment also supports a bearish case for some stocks, and I’ve found a trade to capitalize on this scenario.

Janet Yellen and the FOMC increased interest rates another quarter point last Wednesday, and Yellen made it very clear that she intends on being more aggressive with hikes than previously expected. Some are calling this new, market restrictive policy the “Yellen Collar.”

Her promise for higher rates will slow down the flow of money in the economy, and will also trigger investors to move out of certain income-oriented sectors and into other assets.

This is where my Profit Amplifier readers and I will position our next trade.

How Rising Rate Environments Hurt Real Estate
One of the most rate sensitive investments is real estate. When interest rates rise, the higher loan costs squeeze profit margins and diminish investors’ returns. The affordability of real estate in general also diminishes, leaving fewer buyers who are willing and able to pay more — a double whammy for real estate profitability.

In other words, real estate investments get a whole lot less attractive.

Real Estate Investment Trusts (REITs) are investment vehicles that that own real estate directly — from land and office buildings to apartments and even mortgages — but trade just like stocks. Investors can buy shares in these trusts to gain exposure to these various types of real estate.

Revenues come from collecting rent on properties they own (equity REITs) or from interest they earn on mortgages they’ve purchased or written (mortgage REITs).

In order to qualify as a REIT, these trusts must distribute at least 90% of their net profits to shareholders via dividends. So when interest rates are low, investors are attracted to their dividend yield. However, that dividend yield usually comes at the cost of higher volatility.

Because REITs trade like stocks, their prices are often affected by broader market forces that have nothing to do with the actual real estate holdings they represent. So, when rates rise, investors will often pull their dollars out of these trusts and put them into safer investments like bonds — partly because REITs can be extremely volatile in price, but also because those bonds are now offering a better combination of income and security.

The iShares U.S. Real Estate ETF holds apartment rental REITs such as AvalonBay Communities (NYSE: AVB), Equity Residential (NYSE: EQR), Mid-America Apartment Communities (NYSE: MAA) and others. Stocks like these have boomed in the past decade as home ownership dove to 50-year lows while apartment vacancies and rent rates ran to near all-time highs — a perfect situation if you’re a big landlord.

The problem is that these extreme conditions are reverting back to normal levels.

AvalonBay, the second largest apartment REIT in the United States, is seeing a slowdown across most of its communities as supply and demand come into an equilibrium not seen in a long time. For the first time in years, the company is seeing a reversing trend in rent rates and reported a two-year low in same-store revenue.

Another large apartment operator, Mid-America, also saw occupancy slip slightly in the most recent quarter, and analysts have not gotten any more bullish on its stock even though the company “met” expectations. Given the current market dynamics, Mid-America and its peers have a much higher chance of losing occupancy than they do of hitting 100%.

Analysts have tempered expectations in the sector for good reason. Average rent rates have been moving lower since August, and fell month to month in 55 of the top 100 cities in the United States from October to November. Rents are now up just 1.7% compared to 2015.

The biggest problem here is oversupply. Multi-family development has carried much of the housing market’s construction growth over the past few years, and now that rent rates are slowing, it’s becoming an industry problem. Recent data show multi-family developments, such as townhouses and apartment buildings, slid 45% to an annual rate of 262,000 units. And increasing interest rates are unlikely to help spur a rebound, especially in the winter months.

On that topic, Q4 is not a booming time for apartments. Most new moves, rent increases and/or promotion occur in the spring and fall, as they are the peak national moving seasons.

So not only are we in the worst season for apartments in general, there are also real forces in the form of interest rates, lower rents and falling occupancy all coming together to create what I believe will be a very tough quarter for many REITs.

How We’ll Play The Changes
The Trump rally has offered some serious relief for many REITs and for IYR in particular. I believe that conditions in Q4 will be worse than Q3, and that investors will continue their exodus from many REITs as they gravitate to less volatile income investments.

Despite the rally, IYR remains below its 200-day moving average and is still dominated by a series of lower highs and lower lows that have not been violated.

Its bearish trend remains firmly intact, and the 200-day moving average should act as a strong resistance level, helping to prevent a breakout. 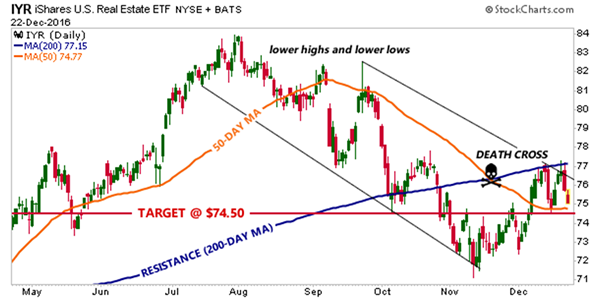 Just like individual REITs, IYR trades just like a stock, except it’s much more liquid than most single REITs, not to mention it’s less volatile.

As the industry continues to weaken, I see IYR moving back down to its first big support level of $74.50. If that happens, based on the details of a recent trade I recommended to Profit Amplifier readers, we can use put options to amplify a 1% move downward for a potential 14.6% gain before March.

That’s part of the beauty of using options… we can spot trends at work in the market and play the downside of stocks and ETFs  and turn a move of just a few percentage points into impressive short-term gains — all without having to risk much capital. If you’re curious about how to make trades like this and turn small moves into big, quick gains, then I encourage you to check out this report. You’ll learn how my subscribers and I use a simple strategy to play options the smart way — and make a fortune in the process.