Pre-IPO Insider: Your Last Chance At A Social Media Startup

Grab My New Book FREE! This Special Edition of Investing in the Next Big Thing tells you everything you need to know to get started in Pre-IPO Investing and includes an exclusive bonus chapter revealing 3 startups that I’m telling my clients to buy right now. They are 3 of the best bets for an explosive payoff that I’ve seen out of the 289 firms I’ve reviewed in the past three years. This Special Edition won’t be available on Amazon.com or anywhere else. It will only be available through StreetAuthority. Learn more.​ — Joseph Hogue, CFA

Ask me ten years ago and I wouldn’t have believed it but social media is now an inescapable part of our daily lives. Nearly four-fifths (78%) of Americans reported having a social media profile in 2016 and users approach nearly two billion worldwide.

Early investors in the major platforms booked massive returns on investments when the sites were small startup companies.

#-ad_banner-#For example, hedge-fund manager and venture capitalist Peter Thiel was one of the first investors in Facebook (Nasdaq: FB) with a $500,000 investment in 2004. When the company went public just eight years later, Thiel’s investment was worth $1.67 billion. That works out to an annualized return of 175% a year. Even a modest investment of $1,000 would have grown to $3.3 million over the period.

Shares of Facebook have done well over the last several years… but nothing close to 175% a year.

There is still one social media giant that has yet to go public. It’s one of the largest, with 150 million monthly users. Unlike most startups, this company is already generating revenue… almost $170 million a year!

And it recently hired a chief financial officer to develop the corporate structure, igniting rumors of an imminent IPO.

You can’t buy shares in the stock market. This is still a private company.

But you can get a piece of the action as a Pre-IPO investor.

This Could Be Your Last Chance At A Social Media Startup
Pinterest is the sixth-largest U.S. social media site by users. While other platforms are struggling with growth, Pinterest is still in full-on growth mode. The four largest social media sites, including Facebook and Twitter, booked an average of just 15% user growth in 2015.

Pinterest grew its user base by 96% during the year and is attracting new demographic groups. 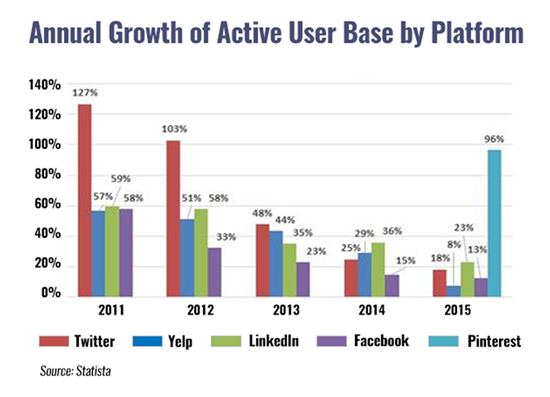 Management is targeting $2.8 billion in sales by 2018 as the platform grows its user base and develops new products. And it has plenty of the right kind of help. Beyond the co-founders, outside advisors and investors include Yelp co-founder Jeremy Stoppleman and Netscape co-founder Marc Andreessen. Andreessen’s venture capital firm has guided some of the biggest startups in the space including Facebook, Groupon and Twitter — and as a pre-IPO investor, that’s the kind of expertise you want on your side.

When I analyzed Pinterest for my first issue of Pre-IPO Millionaire in August, I thought it would be the last opportunity to invest in the company before it went public. In the world of pre-IPO companies, Pinterest is very “late-stage.” An IPO could happen at any time. Based on my exclusive analysis at the time, which still holds, I estimated that an investment in the company could yield an annualized return of 38% over the next three years.

And you may still have time to invest because crowd-funding platform Microventures is raising money for a secondary offer in the company.

Accredited investors — those with a net wealth over one million dollars or income over $200,000 — can invest in Pinterest for as little as $10,000 on the Microventures crowdfunding portal. Microventures is raising money for investing in the company in a pre-IPO offer at approximately $7.18 per share on a company valuation of $10.6 billion.

While the Pinterest deal is only open to accredited investors, I highlight opportunities every month in Pre-IPO Millionaire that are open to all investors, and for as little as a $100 minimum investment. For more information, click here.