Why Investors Should Rethink “Value” Investing

Jeremy Grantham may not be as well known as Warren Buffett to the general public. But he’s considered a giant in the investing world.

A co-founder of Boston-based asset management firm GMO, Grantham is known for his breadth of knowledge on just about every market topic — especially asset bubbles.

When I was coming up in this business, Granthan’s quarterly shareholder letters were a must-read.

And there’s one in particular from 2017 that still very much applies to today. In fact, Grantham referenced this letter in a CNBC interview back in March of this year.

If you’ve found yourself wondering whether this bull market is a bubble, how much longer it can last, and whether “value” investing has any relevance in today’s market, it’s definitely worth a read.

Here’s a snippet to kick things off:

When I started following the market in 1965 I could look back at what we might call the Ben Graham training period of 1935-1965. He noticed financial relationships and came to the conclusion that for patient investors the important ratios always went back to their old trends. He unsurprisingly preferred larger safety margins to smaller ones and, most importantly, more assets per dollar of stock price to fewer because he believed margins would tend to mean revert and make underperforming assets more valuable.

You do not have to be an especially frugal Yorkshireman to think, “What’s not to like about that?” So in my training period I adopted the same biases. And they worked! For the next 10 years, the out-of-favor cheap dogs beat the market as their low margins recovered. And the next 10 years, and the next! Not exactly shooting fish in a barrel, but close. Similarly, a group of stocks or even the whole market would shoot up from time to time, but eventually — inconveniently, sometimes a couple of painful years longer than expected — they would come down. Crushed margins would in general recover, and for value managers the world was, for the most part, convenient, and even easy for decades. And then it changed.

What Grantham says here is important. You see, most everyday investors are told or believe that value investing is the way to go. Buy and hold never fails.

Rubbish. It’s a gross oversimplification. Even Buffett himself is no longer a “value” investor in the old-school Ben Graham sense. Yes, studies show that this strategy does work over the long-term. But there is mounting evidence that we’re in a “new normal.” It doesn’t mean that value won’t ever come back into favor, but it might be a while. And Grantham agrees.

As evidence, Grantham cites the price-to-earnings (P/E) ratio of the S&P 500. From 1996-2006, he says, the S&P’s average P/E of 23.36 was abnormally high by 1935-1995 standards — by as much as 65-70%. And even after the bursting of the tech bubble, stock valuations only returned to “normal” temporarily. (Forget about the financial crisis — valuations dipped within the blink of an eye and then quickly resumed upward, as we have witnessed over the past several years.)

Here’s what Grantham had to say:

Indeed, a trend is by definition a level below which half the time is spent. Almost all the time spent below trend in the US was following the breaking of the two previous bubbles of 1929 and 1972. After the bursting of the tech bubble, the failure of the market in 2002 to go below trend even for a minute should have whispered that something was different. Although I noted the point at the time, I missed the full significance. Even in 2009, with the whole commercial world wobbling, the market went below trend for only six months.

What Grantham is saying here is that something is different here. Stocks have been “expensive” by historical standards for a very, very long time. Something will eventually give, but it may be a while.

To understand this point, just look at Amazon (Nasdaq: AMZN). It’s the perfect example of what Grantham is talking about here.

And for me, it’s what broke my conventional understanding of “value”.

Today, Amazon is a $864 billion behemoth. Its impact on retail — and American society in general — is undeniable.

The company is much more than an online retailer. We’re talking about an organization with the analytical capabilities to often know what customers want before they even know themselves. It’s revolutionized the following fields: online shopping, logistics, supply chains, robotics, groceries, online video, artificial intelligence, the cloud… The list goes on and on.

And of course, the stock itself has had one of the most incredible runs in history.

But here’s the thing… For years, Amazon has defied traditional “value” investing logic.

Think about it… It’s one of the few “internet” companies that survived the dot-com crash relatively unscathed. Old-school, value-minded investors noted for years that the company never traded for what’s normally considered a “cheap” valuation from a price-to-earnings standpoint. In fact, the stock’s P/E ratio was often in the triple digits.

Right now, the stock sports a P/E of 77. That’s actually low by the stock’s historical standards. If you come from Benjamin Graham’s school of value investing, this is enough to make you blush — if not outright sick to your stomach.

I have to admit, despite witnessing all of the incredible innovation Amazon has produced over the years, I’ve often been sceptical of the stock. And I’ve been dead wrong… 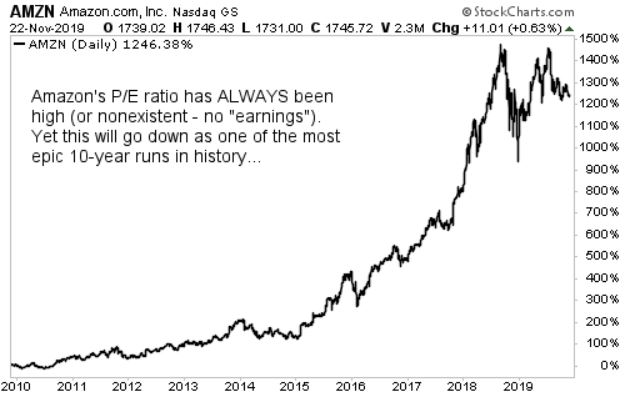 I’m not alone, either. Be honest… How many of us actually had the foresight to pull the trigger and buy the damn stock?

Don’t kid yourself. I’m willing to bet 95 out of 100 investors missed the ride on Amazon.

Why? Well, part of the reason is that a lot of investors try to get too cute with their invesitng ideas. I’ve written about this before. This mindset almost led to me missing out on the best investment of my career: Apple.

The other reason? Oh, the stock was too expensive.

You see, those who focused solely on Amazon’s valuation — particularly the denominator (i.e. earnings) — were completely missing the point. For years, Amazon’s leadership didn’t give a hoot about quarterly earnings. That’s because it was hell-bent on taking over the world. To do that, it plowed very red cent it earned right back into growing the business. The company only just recently decided (you read that right, decided) to start producing earnings.

I’m not asking you to become an Amazon fanboy in this essay. But what I am asking you to consider is changing your mindset about “value” investing. The P/E ratio it turns out, isn’t everything. Those who were overly fixated on Amazon’s “valuation” missed out on one of the greatest wealth-creation opportunities of a lifetime.

Now, expand this thinking out to the market as a whole. How long are you willing to wait to be “right” about the market?

In conclusion, there are two important things to carry in your mind: First, the market now and in the past acts as if it believes the current higher levels of profitability are permanent; and second, a regular bear market of 15% to 20% can always occur for any one of many reasons. What I am interested in here is quite different: a more or less permanent move back to, or at least close to, the pre-1997 trends of profitability, interest rates, and pricing. And for that it seems likely that we will have a longer wait than any value manager would like (including me).

So what’s an investor to do then?

In short, get used to the “new normal” — but stay on guard. Don’t wait for a major dip before deploying cash into the market. You may wind up waiting a lot longer than you think. And you’ll miss a lot of opportunities along the way.

To paraphrase the economist John Maynard Keynes, the market can stay “wrong” a lot longer than you can remain solvent.

P.S. If you’re ready to shake things up and try something new, then I highly recommend my colleague Jim Fink’s latest project…

It’s called “Paragon”, and it’s a trading system that allows you to capture bigger gains than “buy and hold” investing — in a fraction of the time. This proprietary program was created after years of trial-and-error, and has the power to turn small stock movements into powerful triple-digit-plus gains. And as we discussed last week, with one of the techniques Jim uses, you don’t even need to guess whether a stock will go up or down.

Jim is sharing Paragon with a slect group of 500 traders for a limited time only. Here’s how you can be one of them…