If you’re like most investors, then you’ve probably made out pretty well in the past few months. But the ground has been shifting underneath the market for the past few weeks. One week, tech stocks lead the way. The next, it’s financials. Another week, it’s commodities…

It can be enough to make your head spin. But the one analyst that’s consistently been on top of each wave for the past year is none other than my colleague Jimmy Butts, Chief Investment Strategist of Maximum Profit.

In fact, since the very beginning of the Covid-19 rebound, Jimmy and his followers have been on fire. They’ve consistently racked up more triple-digit winners than anyone else — and for good reason.

It’s all thanks to the rigorously tested, rules-based system that Jimmy has perfected over the years.

Recently, I sat down for an interview with Jimmy to get his take on what makes his system so successful where so many others fall short. You’ll get to know Jimmy a little more, plus understand why the Maximum Profit system has been the single most effective tool for delivering bigger profits in less time than anything else in StreetAuthority’s history.

Thanks for taking the time, Jimmy. For readers who may not be familiar with you, tell us a little about yourself.

Jimmy: Years ago, I was working as a financial advisor, helping clients with retirement and estate planning. I was getting restless, and it was time for a change. After spending years getting schmoozed by some of the biggest fund managers around the country, I wanted to find a new way to help individual investors that didn’t require me to charge them outlandish fees. So I packed up and moved 1,600 miles from my home in the Pacific Northwest down to Austin, Texas to begin working at StreetAuthority.

After joining StreetAuthority, I quickly began working with the team that developed the Maximum Profit system. I’ve moved back to the Pacific Northwest since then, but was fortunate enough to take the reigns a few years ago and have been doing that ever since.

There’s a lot to say about how your system works, but I’d say the short version is that it takes advantage of a sort of “anomaly” in the stock market — and you use that to make everyday investors as much money as possible in the shortest amount of time. Is that pretty accurate?

Jimmy: Yeah, that’s pretty good. But, as you know, there’s a lot more to it than that. It’s hard to boil down the essence of a stock-picking system that took so many man-hours and so much money to develop over the years into simple terms.

OK, then give us the longer version…

Jimmy: Sure. This may sound obvious, but the Maximum Profit system profits from what’s working in the market at any given time. That’s what makes it so revolutionary. It blows the roof off of the conventional Wall Street model. In fact, I bet that according to most of the theories our readers have ever known or been told about successful investing, the system shouldn’t work.

But it does… And its goal is simple: uncover what works — and what doesn’t — so that you can beat the market in any environment. And after years of research and hundreds of hours of testing it’s become one of the best investment strategies out there. The system combines the two most powerful indicators from the worlds of technical and fundamental analysis to find winning trades. We’ve tested this system on everything from S&P 500 stocks to high-yield stocks to small-cap stocks.

The results are always the same: The Maximum Profit system beats traditional “buy and hold” investing with less risk.

Now, if you don’t mind, let’s pull back the curtain and reveal the mechanics. As you mentioned, the system relies on two powerful, time-tested indicators for its picks. Let’s talk about the first one.

Jimmy: Absolutely. In its most basic form, we’ve designed a kind of algorithm that helps us simply buy stocks when they go up and sell when they start to go down. But as easy as this sounds, historically many “momentum” investors — well, ALL investors really — have struggled with knowing exactly when to sell. They either hold on for too long and watch their gains disappear, or they cut their winning positions too early and miss out on even bigger gains.

Another problem is not having a clear idea of what to buy next, which would lead to simply chasing the latest hot stock tip (in other words buying high and selling low.)

And that’s where the “algorithm” comes into play, right?

You got it. The Maximum Profit system addresses these common problems with a tool we can use to set clearly defined buy and sell signals. This takes the emotion out of the investment process, which is huge. Emotions are the biggest enemy of most investors. With our system, as long as your follow the signals, your chances for success are pretty high.

Think about it this way… Most stocks have a fairly extensive trading history, so selecting a winner is actually like picking a team after the game is already in progress. Just like in sports, I want to pick the stock that has been winning already because it has a better chance of winning in the future. Our technical indicator allows me to quantify who the leaders are right now. And study after study confirms that those stocks tend to outperform the average stock in the future. That’s why even the “efficient markets” believers (including a Nobel Prize winner) have pretty much acknowledged this as an “anomaly” to their theories. It’s one of the few true “edges” available in the market.

So when that first “buy” signal hits, it tells us we’re on to something. Then we move on to the second part of the system — the fundamental indicator.

(And on the flip side — this is important — we sell when the system tells us to. No questions asked.)

So tell us about the second part of the system.

Jimmy: My second rule uses a metric based on cash flow, and I use it to eliminate stocks with weak fundamentals. I’m a big believer in cash flow. I think it may be the single most important fundamental metric out there. It’s the lifeblood of any business.

Just as a refresher, cash flow measures the amount of money coming into a business. It’s used to buy new factories, pour into research and development or deliver cash back to investors through dividends and share buybacks.

This is far more important than earnings, if you ask me. Simply put, companies need cash flow far more than they need earnings to survive. Lehman Brothers had fantastic-looking earnings right up until the end, but it lacked cash flow. 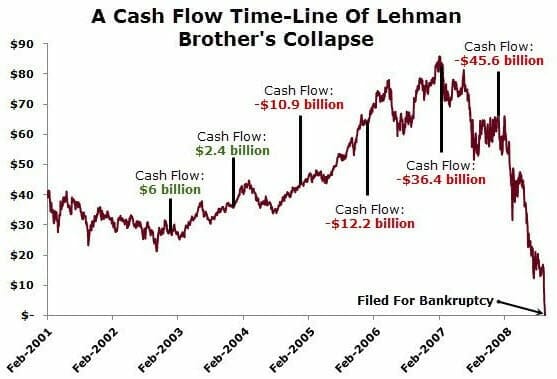 If there’s one thing our readers could learn from our discussion today, I hope it’s that they learn to focus less on Wall Street’s earnings game. Research has shown that cash flow is a much better indicator of future stock returns. Others have found that companies with more cash flow than earnings tend to perform better over a 12-month period.

Our second indicator takes this analysis a step further by telling us how much cash flow is growing. I want to find the companies with the strongest improvement in cash flow during the past 12 months, because those are the ones with the resources to increase earnings, reward shareholders and outperform the market.

Now, one thing I should mention is that when you cite academic studies as proof for these two indicators… A lot of people are going to say “OK, he’s telling us some egghead professor did some backtesting. Big deal.” But as the kids say these days, you have the receipts.

Jimmy: Thanks, I guess I’ll take some of the credit. But the great thing about Maximum Profit is this… It’s the closest thing I’ve seen to a stock-picking system for individual investors that is almost completely agnostic to the attitudes and emotions of the person using it.

Provided you exercise discipline and get in and out exactly when the system tells you to, you should be able to rack up some pretty impressive gains. And as you mentioned, our track record speaks for itself.

We’ve covered a lot of ground today, but we’ll leave it at that for now. And while Jimmy isn’t one to brag, allow me to do it for him. Since we started Maximum Profit, it’s been StreetAuthority’s best-performing investment system. And it isn’t even close. That’s led subscribers to some phenomenal gains in a short amount of time:

Bottom line, there’s nothing out there that has been able to deliver so many consistent winners in a variety of market conditions. And for for those who want to know more about Jimmy’s latest picks, you’re in luck…

Jimmy and his team have just released a brand new report about the “anomaly” his system uses to rack up big-time winners. You’ll learn how it works, and why it’s been able to rack up triple-digit wins again and again.