What Really Needs To Happen With Healthcare

When it comes to legislation and its effects on society, I try to forget about “party lines” and partisanship… You could almost say I’m agnostic to that kind of thing.

That’s especially true of hotly debated healthcare issues. The Affordable Care Act (ACA) — better known as “Obamacare” — is, unfortunately, one act that’s divided many Americans. As we try to improve on its framework, I find it humorous that pundits on both sides get the argument wrong over and over again.

No matter what you think about the ACA, I think it’s fair to say that all of us want quality healthcare that’s truly affordable — both insurance premiums and the cost of treatment.

Lawmakers seem to think throwing money at the growing problem of uninsured Americans and soaring costs would help, but the biggest issue isn’t with the premiums themselves… it’s something totally different.

The good news is that the part of the healthcare puzzle that’s missing is going to be found, even if part or all of the legislation is repealed — the best part is that we can profit from it!

Can’t Be More Affordable If It’s Getting More Expensive
I have to admit that I was against the act in its present form because I knew what would happen to premiums and healthcare quality. That’s not to say I didn’t support many ideas within the bill, such as pre-existing conditions, not dropping patient coverage when they become ill, etc. But seven years into this plan, the cost increases have become too painful for many to bear.

In 2016, the average American family paid $18,142 in healthcare insurance premiums alone — nearly 36% of their pre-tax income! That large amount is expected to grow at a rate of 5% to 7% every year. In fact, according to UBF, an employee benefit consultant, the ACA guarantees an increase in annual taxes that amounts to roughly 3.6% per year minimum.

The Trump administration worked hard to repeal, replace or augment the ACA, but with little luck. One of the reasons for Trump’s failure thus far is the lack of a comprehensive restructuring plan (and the participation of the only people that can stop runaway costs).

In my opinion, the rushed solution recently presented for vote was a far cry from a much needed industry re-think. Republican hero John McCain realized this and went against the grain.

Unfortunately, healthcare lobbyists, providers and big pharma are against the real solution that comes in the form of dramatic cost reductions by those same providers and drug companies. They’ve tried to blame insurers (and yes, insurers are a part of the problem), but have not stepped up themselves.

The current logic makes no sense. It’s like expecting a homebuilder to argue for lower housing prices when his livelihood depends on prices being as high as the market can bear. Instead of setting minimal guidelines and letting the market find value, the government is essentially giving money to prospective buyers (who cannot afford it) and forcing banks to make loans.

#-ad_banner-#It was poor decisions like this that led to the Great Recession.

More on this idea shortly.

There are many experts who believe a full repeal of Obamacare is impossible. And even though several insurers are either scaling back or getting out of the ACA’s marketplace altogether, many parts of the act are likely to stay in place.

The ACA was so comprehensive and far reaching that it would be extremely cost prohibitive and economically devastating to reverse it entirely. I do believe, however, that changes to some parts of the legislation are still likely.

What Now?
The point of all this is that the government will likely continue to subsidize healthcare for lower-income Americans, but will do so through certain insurers and providers at discounted rates and quality (through Medicare, etc.).

Relatively healthy middle- and upper-class Americans are likely to abandon the overpriced and under-covered plans offered through the marketplace and purchase insurance directly through companies.

Humana (NYSE: HUM) is an insurer that’s currently focusing heavily on Medicare, which cost the government approximately $650 billion in 2015 and is not a target of the repeal the president is seeking.

And this is precisely why I think Humana, which will be completely separated from the marketplace in 2018, has tremendous upside… especially since much of the ACA is likely to stick around. Here’s why:

— By distancing itself from the marketplace, Humana will not only be able to cater to potentially healthier and wealthier individuals… it will also no longer be subject to the sometimes-chaotic decision making process in Washington, D.C.

— The unpredictable nature of D.C. policies is the very reason the marketplace has been falling apart in the first place. In fact, it was the No. 1 reason cited by Humana for leaving! Humana will break away and work directly with providers and customers to find a happy, profitable medium. While healthcare continues to get shaken up, Humana should be able to rise above the fray and increase its earnings gains since they’ve begun to go their own way.

— I believe Humana will capture a greater share than analysts are expecting; currently, the average analyst has a “buy” rating with a consensus target above $246.

Smoke Screen Creates Value
Trump is lashing out after the GOP failed to push a repeal through and is now threatening to end the “bailouts” (subsidies) offered through the ACA. 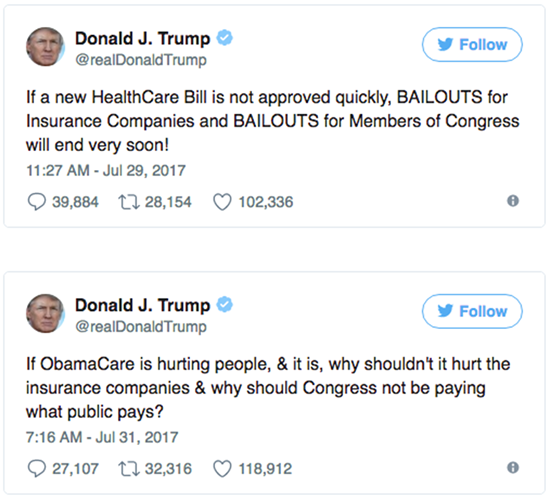 At first glance, these tweets seem like a direct attack on insurance companies, but remember, Humana is exiting the marketplace by 2018 and will not be utilizing subsidies.

I predict President Trump will be successful in repealing parts of Obamacare and may even be able to reduce these government subsidies. These actions will not only hurt HUM’s competition, but also hopefully change the bigger problem that American healthcare is facing.

As Trump progresses on his quest for lower premiums and government spending, the simple truth will be revealed…

…the real costs of healthcare are simply too high in the country, and it’s not the insurance companies’ fault.

I believe that the real solution to our healthcare problem is a reduction in the cost of service. Someone needs to rein in these runaway costs.

Remember, that when costs come down, margins for insurers like Humana go up.

Some of the important reforms I discussed may come to pass. Then again, maybe they won’t. Either way, it doesn’t benefit your portfolio to hold your breath. Either way, I think Humana is in a good spot, given the situation. You could simply buy the shares outright, but why risk it?

That’s why I recently recommended a trade on Humana using my proven options strategy. Even after a recent run-up, I think there’s still some upside left in the stock. But rather than bet on a big run-up, my Profit Amplifier subscribers and I only need a 2.6% move to happen — and if it does, then we’ll make as much as 25%! And we’ll be risking less capital upfront in the process.

If you’d like to learn more about how to make simple trades like this, then I encourage you check out this report.