Earn An Easy 27 Percent Off This Fast Food Loser

Over the past decade or so, we’ve seen a major shift in the way we eat out. While I still like a good ol’ McNugget, the rest of country apparently wanted something more… and fast-casual dining chains — Chipotle, Potbelly, Red Robin, SmashBurger, Shake Shack and so many more — were happy to oblige.

This new evolution of “fast food” has elevated the market with higher-quality, arguably better tasting foods. These companies have also permanently stolen market share away from legacy brands in this already oversaturated industry.

As these new companies opened up thousands of locations across the country, “old school” fast-food chains found it harder and harder to make money. As a result, they too opened new stores! Now, we are stuck with way too many fast-casual restaurants, all of which are experiencing slowing sales growth and rising food costs that are cutting into margins, compounding the competition factor.

But when a market becomes oversaturated, not every company will be able to thrive. Somewhere, there has to be a little give. Today’s target is one of those companies that can’t stand the heat…

A New Strategy Failing To Deliver
Now, my beef with The Wendy’s Company (Nasdaq: WEN) has nothing to do with dissing Dave Thomas’ brain child or those delicious Frosties, which now come in vanilla.

Rather, this trade is about analysts’ growing concern of Wendy’s ability to grow profits at a time when the company has a lot on its plate — spending money on renovations, divesting out of company owned stores and fighting for space in a VERY competitive market.

Even after a recent earnings “beat” in early August, shares have been declining. This action tells me that investors are going to want more from the company… and I don’t believe it will be able to deliver.

Over the past few years, Wendy’s shareholders have given the company some leeway with earnings expectations as it transitions to a more “asset light” model, which means dump all your corporate-owned stores and move to a 100% franchise model. This has become a popular solution to the oversaturation problem for some of the lower-tier fast food chains.

#-ad_banner-#In this scenario, the company usually sacrifices higher earnings per store and certain tax advantages in exchange for lower overhead and reduced risk. This can be a successful strategy, as long as sales and locations grow tremendously. These two points are key.

Currently, about 6% of Wendy’s U.S. restaurants are still owned by the corporation, which is looking to divest out of those remaining restaurants in order to get to an almost fully-franchised model. However, the company is doing so in a very bizarre way.

Ironically… the company is actually acquiring struggling franchises, fixing them up and then selling them to larger, corporate franchisees. So, while management is telling the world the company wants to divest from stores, it’s really… investing more.

But there’s the kicker: The company is instituting this strategy in order to cut costs. Instead, corporate is purchasing faltering restaurants and then putting them under costly renovations (which also slows business) before putting them up for sale to potential franchise owners. Considering that these buyers are usually paying a price based on the past few years of sales/income (when sales were faltering), I’d bet Wendy’s doesn’t make very much money on these transactions.

The tactic is risky at best and is costing the company millions. Period.

Spending money on renovating and refurbishing stores has some arguable benefit. In the second quarter, while total revenue fell 16.3% year over year, same store sales increased 3.2% for the period. Management attributed the rise to those store renovations.

So, does that mean we can expect sales to continue to accelerate? I say no.

While I think the cleaner stores may have brought some folks back into Wendy’s, it doesn’t motivate people to buy more burgers. I think the current oversaturation and tight competition within the industry will likely prevent store traffic from increasing much further.

…Which brings me to the crux of the trade I recently recommended to readers of my premium options service, Profit Amplifier.

Rich Valuations + Impatient Investors = A Bad Combo
I want to start by showing you a chart: 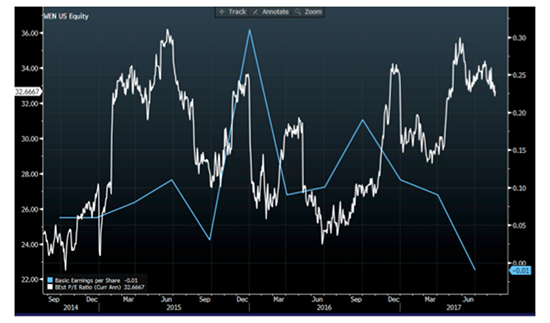 The white line is WEN’s forward P/E ratio, which is now approaching its highest level in years. Now, rising P/E levels are fine when other metrics, like revenue or earnings, are rising. Those factors can get investors excited about a stock, causing prices — and subsequently, P/E ratios — to rise.

But there’s a little problem; you see, the blue line represents WEN’s earnings per share (EPS), currently at the lowest it’s been in years. (The company actually lost money last quarter.) Not a trend I would call positive.

Despite having little to show for it, shares of WEN have nearly doubled over the past two years. Even though the company is struggling to grow earnings, it’s somehow trading with an extraordinarily high forward price-to-earnings (P/E) ratio of 33.

Logic would then lead you to think that maybe sales are on fire… but that’s not the case either. 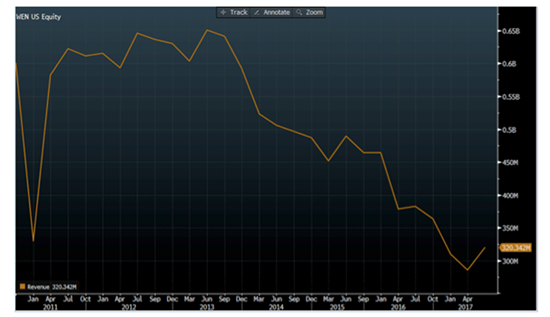 Revenues, shown above in orange, have been plummeting, sinking to 10-year lows.

In fact, sales dropped 16% compared to the same quarter last year. And while the company is expected 2% to 3% growth in 2017, analysts are now calling out mounting risks from rising restructuring costs and competition from stronger peers, like McDonald’s.

And even though the company “beat” analysts’ very low expectations for the latest quarter, shares are finally starting to decline and are about to fall below key support. This is where we can ride the momentum lower.

“Raiding” The Market For Bigger Gains
This price action tells me that investors are losing confidence in Wendy’s growth prospects, which could send shares back to a more reasonable level. But rather than betting on a major downward swing by shorting the stock, I have a better idea…

You see, thanks to the market “raiding” technique my Profit Amplifier readers and I use, we don’t need to bet on a big downward swing. And rather than shorting (which carries theoretically infinite risk), we simply use a targeted trade to bet against a small downside move of just a few percentage points — but we end up walking away with more than our fair share.

Based on the details of the trade I recently shared with readers, all we need is for the stock to fall to around the $14.30 mark, which is still 25 times 2018 projected earnings of $0.57 per share. 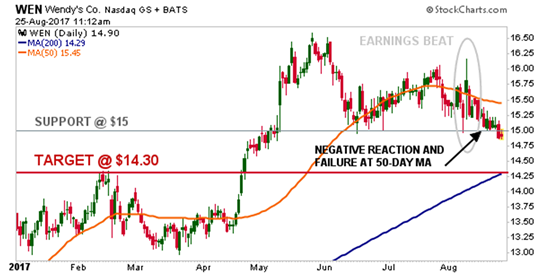 And even though $14.30 is just 4% below recent prices — an easy target given the sharp declines in sales and earnings and very rich P/E — it’s still enough to deliver us a potential 22.7% gain by November.

That’s the power my “raiding” technique has for traders who are willing to use it. There’s nothing illegal about it — in fact, Wall Street pros use it every day. And my Profit Amplifier readers and I have used to take more than our fair share of the profits on trades for years.

If you’d like to learn how to do this yourself, go here.