Why On Earth Are Investors Buying This Stock?

Let’s get right to the point.

I just recently shared a timely trade with my Profit Amplifier readers that I want to tell you a little about. But since time is of the utmost importance, I’m going to have to get right to the point. But please don’t mistake my brevity or lack of personal trade-related anecdotes for cutting corners.

I’ve examined the details thoroughly and can feel confident in telling you that the stock I’m going to discuss is extremely and undeservedly overbought. Experts from Goldman Sachs and Morgan Stanley, as well as several other high-powered analysts, are on my side. But while their warnings get louder and louder, they seem to be falling on deaf ears.

It’s only a matter of time until the short squeeze in this stock ends and its current price, which is more than 30% higher than the consensus analyst target, comes back to earth. And when it does, we will already be well-positioned with put options to take advantage of the move.

#-ad_banner-#This is a classic case of investors hurrying into investments that may benefit from a natural disaster without thinking things all the way through. They often get overly excited about a stock’s potential without looking too deeply at how an event will affect its fundamentals. The Tractor Supply (Nasdaq: TSCO) trade I detailed last week, which is already moving in our favor, is another prime example of this.

Lucky for us, the market is set up another trade just like it.

A Gift From Shortsighted Investors
Rental car stocks have experienced an unprecedented boom since Hurricane Harvey was first spotted in the gulf, but some, like Hertz Global Holdings (NYSE: HTZ), have been pushed up too far.

Hertz is the second-largest car rental company in the United States, sandwiched between market leader Enterprise (which has nearly three times as many cars as Hertz) and Avis Budget Group (slightly smaller than Hertz). Based in Florida and operating primarily in North America, the company also has a presence in Europe, Latin America, Asia, Australia, Africa, the Middle East and New Zealand.

Despite its recent price appreciation, Hertz has been experiencing serious declines in revenue since 2014 and is currently losing money. The average analyst — and remember, these are usually the most optimistic estimates in the room — has a price target of just over $17 a share on the stock against current prices around $23.30. Not a story most would be interested in “buying into.”

Brad Lamensdorf, a friend of mine who manages a bearish ETF, recently told Reuters that Hertz and Avis could be the worst stocks to own right now. But no one seems to be listening.

At least, not yet.

While it’s true that Hurricanes Irma and Harvey likely damaged up to 1 million cars, the lasting beneficial effects these natural disasters will have on rental car companies are likely to be short lived. New and used car dealerships have the inventories to keep repair times limited to weeks, not years.

But investors have reacted as if the car-related impact from these storms will last forever.

And there are other factors as well. Many households who had a car or cars outside (not garaged) likely have multiple cars and will not need a rental car while the other is replaced. In fact, at the height of the recession, American households averaged 2.28 cars — a number that is very likely to have increased in the past few years.

I also suspect that many will simply take the check from the insurance company and move on (both literally and figuratively).

Which brings me to my next point: Many low-priced car insurance policies don’t actually cover rental cars at all. Those left carless will have to use alternative means like Lyft, Uber, public transport, carpooling, biking, walking, etc. Why pay $50 a day, when you can Uber to work for $20 round trip?

And even if the short-term effects give Hertz a boost this quarter, it doesn’t solve the company’s bigger problems. Hertz has garnered nearly $1 billion in market cap since July, yet it’s still losing money. Even if Hertz made $20 per person (net) from 500,000 people over the past month (in addition to the norm), that’s only $10 million additional dollars — and an increase that won’t be there moving forward.

As Morgan Stanley’s Adam Jonas pointed out in his recent downgrade, “Destructive weather events present a material short-term increase to pricing but we believe this is more than in the share price.” He also pointed out that “Structural issues with the car rental model remain.”

When the smartest guys in the room are screaming to get out, investors should probably listen. Hertz has been rallying for months now — many considered it overpriced even before the hurricanes hit — the stock is now primed for a big drop in any moment of weakness.

How We Plan To Profit
Earnings are scheduled to be reported on November 8. While I believe HTZ is likely to beat estimates this quarter, management will have to say something to control future expectations — they have a fiduciary duty to shareholders to do so.

This reality check from management should be enough to send shares back down to a key technical level around $20, if not all the way down to their 200-day moving average near $17.45, which also happens to be around the level many analysts believes HTZ should be trading. 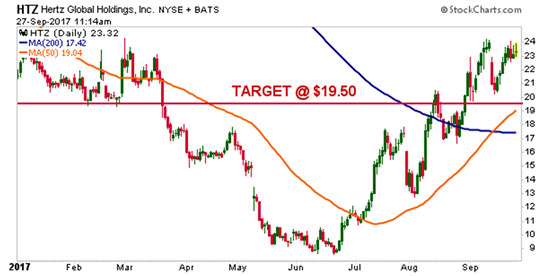 To keep things conservative, my Profit Amplifier readers and I are targeting a price level of $19.50, which is about 15.9% below current prices. But rather than shorting the stock, we’re using our options-buying “raiding” strategy to amplify that move into a potential 23.5% gain by January (and likely much sooner)!

That works out to a stunning 71% annualized return, and more if reality catches up to Hertz as quickly as I think it will. And even if I’m wrong, this trade breaks even at just 7% under recent prices, around $21.50, a move that seems highly likely given the circumstances.

Join Me In “Raiding” The Stock Market
Unfortunately, I have to save the specifics of this trade for my premium Profit Amplifier subscribers. It’s only fair. But hear me out — my proven strategy could be just what you need to get through the turbulent times ahead.

With natural disasters and political turmoil shaking up an already volatile market, it’s tough to pin down where you should be investing. But while the rest of the market has been sitting back and hoping for the best, my subscribers and I have spent the year raiding the market, taking more than our fair share of gains. I’m talking about returns of 35% in six days, 29% in four days, 31% in 10 days and 27% in seven days, just to name a few.