3 Sectors Where You Can Still Find Value

The S&P 500 rose to a price of 18 times expected earnings last week, a valuation not reached in 15 years.

That’s 13% higher than its long-term average multiple and even that take into account earnings jumping by almost three times the average rate over the last four years.

With valuations reminiscent of the dot.com bubble and a market that shrugs off geo-political tensions, a tightening monetary policy, and fiscal stimulus uncertainty, the value investor in me is more than a little worried.

How much has to fall in place for the market to head higher? As a value investor, I hate paying high premiums on stocks… especially if the earnings on which those premiums are based don’t have a chance at materializing.

#-ad_banner-#Fortunately, there are still pockets of value left in this market — if you know where to look.

This Bull Is Getting Expensive
Earnings in the first two quarters gave the bulls something to be excited about, with corporate profits jumping by double digits. Full-year earnings are expected higher by 9.5% this year.

But is the market getting ahead of itself? Analysts expect earnings to grow by 11.5% next year and 9.8% in 2019. That contrasts sharply with an average earnings growth of just 3.9% over the last four years and growth of less than one percent in the two years through 2016. 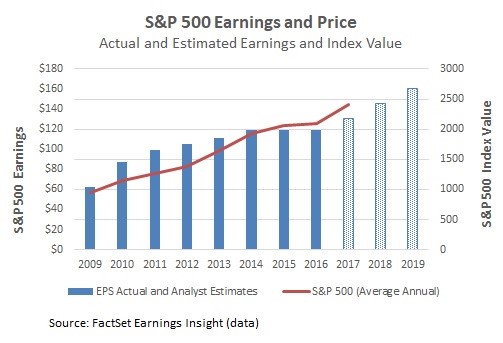 If continued stock market gains depend on earnings growth even coming close to expectations, finding the catalyst for that growth is difficult.

Operating margins at S&P 500 companies touched 10.6% in the second quarter, a record high on data stretching back to 1994 and well above the peak of around 9.3% before the financial crisis. The sluggish earnings environment of 2015 and 2016 were largely about falling profit margins and companies may struggle to squeeze yet more profits without sales growth.

Two factors are responsible for general economic growth: increases in the labor force and the productivity of that labor. Without an increase in either of these, corporations will find a stagnant economy and sub-par opportunities for sales growth.

The growth in labor is likely to be flat at best, thanks to a harder stance on immigration and retiring baby boomers dropping out of the workforce. Productivity growth averaged 2.1% annually in the 17 years through 2004 but has been falling since. Labor productivity grew by just 0.6% annually from 2011 through 2014 and shows no sign of rebounding.

Undervalued Sectors And Stocks Still Remain
At the sector level, seven of the ten sectors have forward P/E ratios above their 20-year average. The three sectors that trade below their historical valuations are Telecom Services, Information Technology and Healthcare. Investor sentiment and uncertainty dog the telecom and healthcare sectors, while earnings growth has surged faster than stock prices in tech.

The telecom sector, trading at 13.0 times forward earnings versus a 20-year average of 16.6 times, is the only sector expected to post negative sales growth for the quarter. Sales for the sector are expected lower by 1.5% with earnings lower by 0.5% this year.

Analyst sentiment on the sector is the lowest of the 11 sectors, with 67% rating the sector as Hold and 6% rating it a sell. The picture could change quickly though as a wave of consolidation helps speed cost-cutting and the sector brings capital spending back to longer-term averages.

AT&T (NYSE: T) trades for just 12.1 times forward earnings, which are expected 1.7% higher than the most recent four quarters. The company may not make you rich overnight, but the 5.5% dividend means even a modest increase in shares can put you into double-digit returns. The non-discretionary nature of sales and size advantage as one of the dominant names in the sector means AT&T is about as close to bond-like returns you’ll find in stocks.

Healthcare has been battered by the back-and-forth in Washington over the ACA program and universal coverage. The sector trades for 16.8 times forward earnings, a discount of 4.5% on the 20-year average of 17.6 times-earnings expectations. While headline risks around drug pricing and insurance subsidies remain, the sector still benefits greatly from an aging demographic and an insurance mandate that increases health care visits.

CVS Health Corporation (NYSE: CVS) has been under pressure all year on the fear of regulatory oversight into pharmacy benefits managers (PBMs) and has recently fallen on rumors that Amazon is considering expanding its reach into pharmacy sales. While both of these threats are real, CVS has incorporated itself into the American healthcare system, with the most integrated supply chain in the sector and volume that will exceed 1.3 billion prescriptions this year.

If Amazon does target the pharmacy industry, it will likely take a year or two, just as CVS is benefiting from the beginning of a massive PBM contract with Anthem in 2020. Shares trade for 12.2 times forward earnings, which are expected higher by 9.6% over the next year.

In contrast to Health Care and Telecom, the Information Technology sector is trading below its long-term earnings multiple because prices have not kept up with earnings expectations. The sector trades for 18.8 times forward earnings versus a 20-year average multiple of 20.8 times because earnings are expected to grow 11% this year and 12.4% in 2018.

Sabre Corporation (Nasdaq: SABR) trades for 13.0 times forward earnings, which are expected 7% higher than the prior four quarters. Just three companies, including Sabre, control 98% of the global distribution system for travel bookings. Sabre may be about to take share from the group after its 2015 acquisition of Abacus gave it a stronger presence in the Asia-Pacific region.

The company has helped retain customers by tying in IT solutions with the distribution network, making it more expensive for clients to switch to other providers. Sabre’s revenues are driven primarily on transaction volume rather than price, so sales are less cyclical relative to other technology companies.

Risks To Consider: Broad-market weakness can still be a drag on sectors with attractive valuations — though they might not fall as far as more expensive sectors.

Action To Take: Take advantage of rare pockets of value in an otherwise expensive market by looking at specific sectors and stocks with below-average multiples.

Editor’s Note: While the Street is bashing Tesla’s failures in its typical short-sighted fashion, Elon Musk is focusing on his most intelligent coup to date. Investors who follow the Wall Street pack will miss out on a flood of profits when Musk launches this $1.3 trillion initiative that could literally revolutionize the world. Click here to discover all the details before it’s too late.