As the holiday season approaches, we’re also entering the time of year when pundits begin to make their predictions for what the stock market will do next year.

Predictions are a tough business. Yet, we continue to pursue them, whether it’s the weather, a sporting event, the economy and, of course, how the stock market will perform. Some forecasters will say the market will continue to struggle next year, while others predict the return of the bull. Both sides will, of course, cite statistics to support their theories.

One of the more popular ones you might hear is how markets tend to deliver above-average returns after a year when they deliver worse-than-average returns – or vice versa. 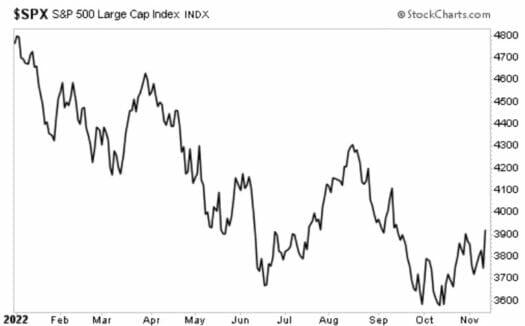 As you can see in the chart above, the S&P 500 is down about 17% so far this year, which is much worse than its historical average of about +9%. So that would suggest brighter days are ahead next year. Before we address that, let’s take a brief survey of the S&P’s historical returns, and how investors can read into them…

Can The Past Predict The Future?

Let’s go back to the notion that past years can influence the subsequent year.

Here’s the thing… there are plenty of examples of times where we’ve enjoyed extraordinary gains for several years in a row, too.

For instance, in 1954 the market soared 52%. The next year the market rallied 33%. Then there were the roaring 90s, where the market delivered a string of five years of better-than-average returns.

There are other examples from the 1930s, 1940s and 1970s that demonstrate that a large gain in one year does not eliminate the possibility of big gains in the following year.

Consider this year, even… Let’s say the market treads water through the end of the year and posts a 17% loss. Well, that will come right on the heels of three straight years of incredible returns. During the height of the pandemic in 2020, the market rallied furiously after the initial Covid-fueled selloff. Eventually, we surpassed previous highs.

That was incredibly tough to predict.

Now, with that being said, let’s take a look at a chart of the S&P 500’s historical annual returns going all the way back to the 1930s. One thing we can see here is that the S&P 500 rarely posts consecutive years of losses. 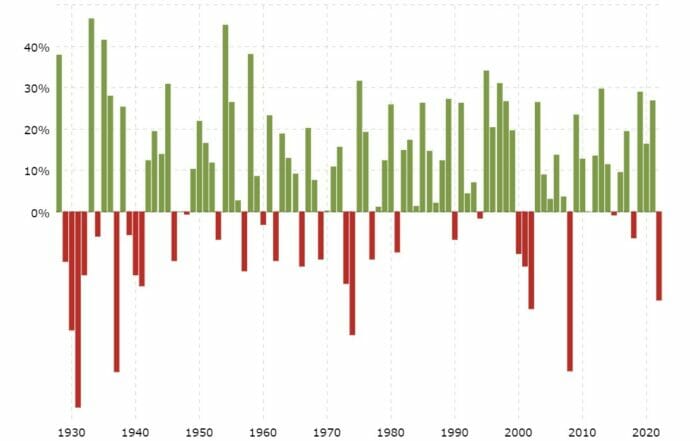 Now, this should give us a little bit of hope going into next year. But here’s the thing you should keep in mind more than anything else…

Nobody knows what the future holds.

And don’t think I’m knocking the idea of making predictions, either. We do it ourselves over at Capital Wealth Letter. In fact, our annual report of investment predictions is one of the most valuable (and popular) things we do all year. But each time we make our predictions, we go into it with clear eyes, knowing that we could very well be wrong — and we shouldn’t bet the farm on any one idea.

So when you see people making these predictions about next year, try to keep a level head. At best, these forecasts are fun, but at worst, they are aimed at your emotions and can be a portfolio killer.

Overall, rather than focusing on data based on small sample sizes or analysts’ predictions, it’s better to put your money into time-tested ideas that have worked over the long run, in all market conditions.

That’s where my colleague Nathan Slaughter comes in. For the past few months, he’s been telling readers about a list of 5 “Bulletproof” income payers that reward investors no matter what…

These securities not only pay market-beating yields — but they also allow you to sleep at night, worry-free. In Nathan’s latest report, you’ll find 5 “Bulletproof Buys” that have weathered every dip and crash over the last 20 years and STILL hand out massive gains to investors.