How I Plan To Make 33 Percent On The CVS Merger

The Affordable Care Act (better known as “Obamacare”) has completely rearranged the healthcare chessboard and left many wanting, frustrated and confused, especially now that its future has become less clear. And I think it’s safe to say that the real beneficiaries of the ACA have been the insurance companies.

As Washington tries to remedy the problems, we are still stuck with the No. 1 problem: How can we deliver low-cost healthcare to middle income families that are being buried with high insurance premiums and a scant provider network that changes year to year?

One solution that would make sense is for a national clinic and pharmacy to merge with an insurance company. This is exactly what the proposed CVS (NYSE: CVS)/Aetna (NYSE: AET) merger would provide. Not only would this merger be a good thing for a large segment of the American populous, it will certainly be a good thing for CVS.

And I cannot express how excited I am for CVS’s stock price.

#-ad_banner-#The road isn’t going to be smooth during the transition, but CVS, which initially moved lower on the news, will reap serious benefits from this deal. If management executes everything correctly, which I believe it will, the company could launch its own lower-cost insurance service and expand its minute clinic services, capturing major bucks from consumers like me who are sick of high-priced healthcare.

My Vision For The New CVS
No longer will you go to your doctor, get a script, run to the pharmacy and see just how much your insurance company is willing to pay. What was once four different profit centers (and stops during your busy schedule) will now shift to a single entity — and CVS can grab profits from each step along the way!

If CVS does this right, it will capture a profit from their network of physicians, PAs and nurse practitioners, then grab the profit from the prescription and a portion of the premium the patient is paying.

On the patient side, the process should become easier and cheaper. CVS already negotiates pharmaceutical prices with manufacturers and distributors to get the best prices for itself and you — both in person and through the mail.

This deal allows CVS to not only capture insurance premiums, but to streamline the weedy, complex and costly billing process when it comes to care. Moody’s Vice President Mickey Chadha sees the same benefits I do and believes this deal “could in time lower the overall health care costs for consumers.”

USA Today also sees CVS morphing into a provider powerhouse, with nearly 10,000 locations across the United States. Think of CVS becoming more like an Apple store, with a “Genius Bar” of healthcare pros in the back and other healthcare products in the front. (Plus, the company has already banned cigarettes from its stores.)

Aetna’s 22 million members would now become CVS customers. That means they will have easy access to checkups, prescriptions and all the goodies that CVS sells.

Can you say synergy?

Aetna customers will be able to fill prescriptions at other pharmacies for now, but I see that changing as the new entity will have to play hardball.

And speaking of competition, the move could make it harder for Amazon (Nasdaq: AMZN) to break into the pharmacy game by preventing drugs purchased through Amazon from being eligible for insurance reimbursement. Or, if CVS is smart about it, the company could also partner with Amazon to deliver scripts for it for a fee…

Why I’m Bullish On CVS
CVS has been on my “buy” radar for some time. It’s also a stock my Profit Amplifier readers and I have made money on in the recent past. The way I see it, I already liked the company’s fundamentals, and this merger changes the game exponentially.

The trade works because there is still a ton of skepticism keeping the stock from rallying (at the moment). Most of the cynicism revolves around the likelihood of the deal clearing regulatory hurdles; others are getting bogged down in the amount of cost savings a union would create.

All the merger pros I’ve talked to see no issues with CVS gaining approval from regulators.

And frankly, this isn’t a trade where one can crunch a few numbers and come up with a value. It’s the type of “delayed logic” trade that will flourish as more and more people realize the full potential of this exciting deal that will set precedents in American healthcare.

I wouldn’t be surprised to see CVS buying hospitals or clinics down the road.

And if shares of CVS can’t at least get back to their 200-day moving average of $77, which it initially touched on the news, then the market is simply crazy. Surely the stock can touch $77.50 — which would still be nearly 8% below its 52-week high — in the next six months.

Oh, and did I mention that there are NO “sell” analyst ratings on CVS, and its consensus price target is nearly $86? Heck, even the options have an upside skew bias!

Once market comes to its senses, I see CVS back into the $80 area… but we only need shares to climb to a relatively modest $77.50. 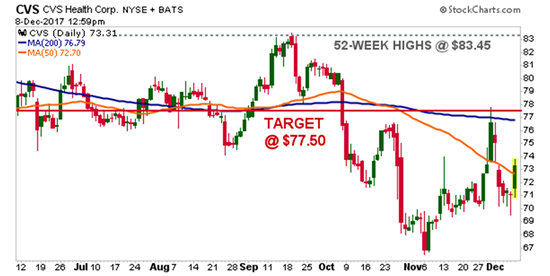 Now, most investors wanting to benefit from this merger would simply buy shares outright. Feel free to do so…

But by using our option-buying strategy, my Profit Amplifier readers and I can amplify this 5.7% bump in CVS’s price into a full 33.3% gain. If you annualize this return, it works out to a truly outstanding 75.1%. And even if I’m wrong, this trade breaks even at just 2.3% above recent prices at $75 per share, a move which seems almost inevitable given CVS’s recent successes and investor confidence.

While the rest of the crowd is simply buying stocks and hoping for the best, my subscribers and I have spent the year “raiding” the market with our simple options trades, taking more than our fair share of gains. I’m talking about returns of 35% in six days, 29% in four days, 31% in 10 days and 27% in seven days, just to name a few.