My Plan For A 69 Percent Gain By March

Have you ever wanted to own and manage your own champion NBA team? Or maybe you were into politics and dreamt of one day ruling over the greatest nation on earth?

Maybe you’re the type who dreams of saving humanity from natural disasters… or piloting your starship to alien galaxies and ward off evil.

When I was a kid, these daydreams were the sparks that excited the mind of many a geek like me (and maybe a few of the cool kids). Back then, 8-bit primitive video games helped feed these fantasies. Unfortunately, the games were rudimentary and usually required a trip to the local arcade — along with a healthy imagination — to make the experiences come alive.

Today, children, teens and adults can live out their imaginations (or just have fun) through immersive, cutting-edge games that utilize high-definition, realistic scenarios in an augmented and even virtual reality that’s becoming hard to differentiate from the real thing.

#-ad_banner-#It’s perfectly normal, for young people especially, to interact with a computer for the majority of their waking hours.

Satiating The Digital Desire
Unlike generations before them, today’s kids looks to digital games and content played on consoles and their smart devices to entertain them. With a limited number of quality game producers and this quickly growing audience, I believe Take-Two Interactive Software (Nasdaq: TTWO) is poised for another leg higher.

Headquartered in New York City, Take-Two is a leading developer, publisher and marketer of interactive entertainment for consumers around the globe. The company is responsible for developing and publishing dozens of hit games over the past decade, including franchises such as Grand Theft Auto, Max Payne, Midnight Club and Red Dead Redemption, which add sequels every couple years.

Its popular franchises and new releases slated for 2018 are expected to drive the stock to new highs with better-than-expected earnings.

Take-Two’s games also frequently spawn offshoots, including downloadable episodes, currency and modified versions for smartphones and tablets. What makes the online, connected revolution so extraordinary is the fact that games are not only cheaper to produce and easily distribute over a wider area, but they can be further monetized through in-app purchases, add-ons and more.

The best part is that companies like Take-Two and its chief competitors, Activision-Blizzard (Nasdaq: ATVI) and Electronic Arts (Nasdaq: EA), can all thrive in this exponentially growing industry. And even though the group’s average price-to-earnings (P/E) ratios are higher than the S&P 500’s average (52.2 for videogame makers versus 25.7 for S&P 500), the industry is also expected to grow 3X more next year (32.9% growth) than the broader index is (10.2% growth).

Investors might not (yet) see the growth potential that is built into these stocks.

As global economies strengthen and consumer confidence and spending in the United States push holiday sales into record territory, you can bet that game companies — especially best-of-breed developers like TTWO — will stand to profit immensely.

And even though TTWO and its peers are on fire and expect to continue their growth, analysts’ earnings estimates are conservative because they are simply too scared to get too optimistic.

So, What Does All This Mean For TTWO?
Well, when I recommended a trade on TTWO to my Profit Amplifier subscribers, the consensus target on TTWO was about $126. That was about 13% above recent prices around $110. With a record holiday season likely in store, I think it’s safe to say that TTWO will deliver another earnings beat when it reports on Jan. 31. This is likely to send those targets even higher still. 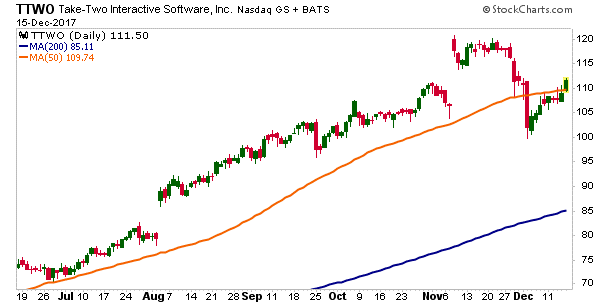 What’s more is the fact that TTWO executives actually presented a more optimistic outlook for the company. This normally conservative management team recently turned aggressively bullish. Given management’s conservative history, you can bet there’s a good reason for the shift in sentiment.

Make 69% From A 13.1% Move
Investors are just starting to pick up on TTWO, which is beginning to drive shares higher — but I think there is a lot more upside to come.

For us, we don’t have to bank on analysts upping their targets on the upcoming earnings beat or investors pushing the stock to new, all-time highs. No, we can potentially pocket a cool profit with the stock simply rising to the current, conservative target of $126.

If, as the market expects (and I do as well), TTWO moves higher by 13.1% to $126, regular investors will be thrilled to pocket a double-digit gain in just over a month.

But we can do better. Thanks to my proven options-buying strategy, my Profit Amplifier readers and I plan to amplify this bump in TTWO’s price into a full 69% gain by the middle of March. For those of you working that annual gain out in your heads, I’ll save you the time: it’s a stunning 286.3%.

While the rest of the crowd is simply buying stocks and hoping for the best, my subscribers and I have spent the year “raiding” the market with our simple options trades, taking more than our fair share of gains. I’m talking about returns of 35% in six days, 29% in four days, 31% in 10 days and 27% in seven days, just to name a few.

Bottom line, my stock market raiding technique is the best way to increase your returns while preserving capital and reducing risk. Of course, that’s only if it’s done correctly.
That’s why I created a special report that will walk you through the steps I take when going on market raids, which should help you avoid the costly mistakes many new traders experience. If you’d like to make trades like the one I described today — or even potentially make 80% when a stock only moves 8% — go here.