It’s no secret that businesses want your e-mail. It’s the holy grail of marketing today — especially for every fly-by-night outfit advertising on social media. You see, if a business can get your e-mail, they can begin an almost scientific process of turning you into a paying customer.

They do this by offering some free report or trial offer. And once you take the bait and provide your e-mail, they enter your e-mail address into a sales funnel. Here, they automatically send you an e-mail every few days trying to get you to read or listen to a long sales letter.

This sales letter is an attempt to sell you a high-priced product or service. And the process couldn’t be easier. The business offers their product or service, and then at the end of the pitch, they offer a bunch of freebies to sweeten the deal.

You know the process. “Buy my $100 book and you’ll get five BONUS reports giving you secrets that only my customers know.” And believe it or not, this funnel system works.

#-ad_banner-#In fact, research shows that once an e-mail address is entered into a sales funnel, it takes roughly 45 days to make that person a paying customer. Moreover, 42% of those people were actually convinced to purchase just on the desire to get the BONUS reports.

The funnel system works so well, I’m going to use it today to describe my favorite investing strategy — buying into a long-term mega-trend. This is the method I used to invest in Nvidia (Nasdaq: NVDA) back in 2014 at less than $20 a share. It’s the same method investors used to buy Microsoft (Nasdaq: MSFT) and Apple (Nasdaq: AAPL) decades ago, too.

And it’s the reason the South African company Naspers (OTC: NPSNY) is on my radar. The company is a global provider of internet and e-commerce, video-entertainment, and print media services. The company has a market cap of just under $120 billion. 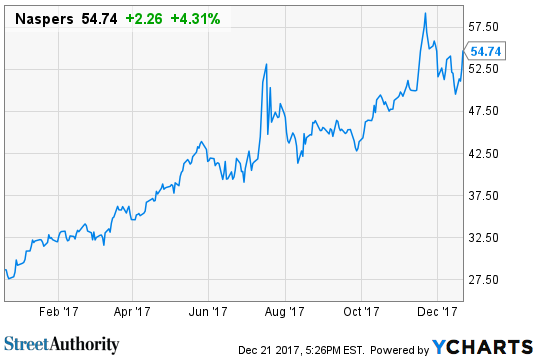 But there is something the company’s market cap does not accurately portray. Naspers was an original investor in Chinese investment holding company Tencent Holdings (OTC: TCEHY) 15 years ago. Today, Tencent is worth roughly $500 billion. 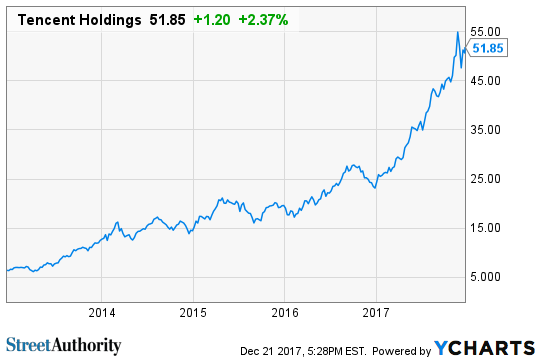 And guess who still owns 34% of Tencent? That’s right, Naspers.

Naspers’ original $34 million investment is now worth nearly $170 billion, in what has to be one of the most profitable investments in history. And Naspers has no intention of selling its stake in Tencent anytime soon.

Why is this so important?

In other words, even if Naspers’ other ventures were to do nothing from here, the company still has a stake in Tencent greater than the market cap of Naspers. This means that if the company were to be liquidated today at fire sale prices, Naspers investors still come out $50 billion ahead. Not a bad deal.

If you buy Naspers today, you’re getting shares valued at a discount to just one of Naspers’ holdings. That’s a deal worth $50 billion — more than worth the price of admission.

But let’s sweeten the deal. Not only will you get the company at a discount, but you get several BONUS companies, too.

You see, Naspers has an incredible global empire.

And the value of those companies is conservatively valued at between $30 and $40 billion. They include online-classified ad businesses, E-commerce businesses, food delivery, and video entertainment companies, as well.

In fact, Naspers has quietly become the global leader in online classified ads. The company leads its competitors in 35 markets and is the top-ranked provider in the United States, India, Indonesia, and Brazil.

Naspers also owns Flipkart, the leading e-commerce provider in the world’s second most populated country, India. Indian programmers designed Flipkart, which means the company understands its customers better than anyone else does. That’s why the company holds an incredible 57% market share in India, yet still expects to grow its business by 160% by 2022.

The Naspers umbrella also includes PayU, the Indian version of PayPal. PayU processes more than 1.2 million payments daily. This will grow exponentially in the next few years, as India will become the world’s third-largest economy by 2025.

Naspers owns MakeMyTrip, an online travel booking company, and redBus, India’s leading bus ticket provider. Naspers also owns food delivery companies Swiggy and iFood, and has a stake in Delivery Hero worth about $2 billion. Delivery Hero is the market leader in food delivery in 36 of the 42 countries in which it operates.

All told, even if these other companies do nothing for the next five years (which is almost impossible), Naspers is worth about $80 – $90 billion more than its market cap. In other words, by purchasing Naspers stock today at a 30% discount to Tencent’s value, you get all these other business for FREE, giving us a total deal worth roughly $200 billion.

But you have to act fast. This deal won’t last long at these prices. Operators are standing by…

Risks To Consider: Many of Naspers businesses are in developmental stages, meaning they are not yet producing revenue. Should another global financial crisis materialize, Naspers growth prospects would be severely hurt — despite the relative safety of its Tencent holdings.

Action To Take: Buy shares of Naspers up to $60 per share. Mitigate your risk by limiting your purchase to a maximum of 5% of your portfolio. Use a 25% trailing stop-loss to protect your capital. Naspers is a growth company, and as such is recommended only for investors with a time horizon of more than 5 years.