My Plan To Make 75.4 Percent From The Narcissism Epidemic

We live in an increasingly shallow society. Any way you slice it, Americans and consumers around the world are obsessed with their outward appearance — and it’s getting worse.

In a world where people broadcast their lives and experiences on social media outlets like Facebook, Twitter and Instagram, superficiality reigns supreme. One can’t help but compare their images to the thousands of retouched, filtered and fabricated pictures and videos flooding our social media circles.

People from all classes and social groups are becoming hyper sensitive of their physical appearance and increasingly self-centered. Nearly 10 years ago, psychologists Jean M. Twenge and W. Keith Campbell predicted these growing trends in their book “The Narcissism Epidemic,” and boy! Have they been spot on!

Nearly a decade later, many of us are increasingly narcissistic, even if it’s not in our nature. The world is just a more superficial place — everyone is trying harder than ever to keep up with the Joneses (or, perhaps more accurately, the Kardashians).

#-ad_banner-#Even for those of us who aren’t TV or YouTube stars, it’s not uncommon for critiques and judgments to be thrust upon us by peers and those in and around our social circles. Since many of us are our own worst critics, scrutiny from outsiders only strengthens our insecurities.

This can be hard for young people — especially those who don’t fit the “standards” the internet sets for us — and the feelings of shame and/or embarrassment can be overwhelming. Considering that cosmetic surgeries are at all-time record highs (and growing), it seems that “flaws” are being removed at a record pace.

As far as physical standards go, teeth have long been a focal point. From a medical perspective, teeth can be an indicator good health, your genetics and hygiene; socially, teeth are a barometer of attractiveness (and, therefore, a potential source of embarrassment).

Somewhere between 70% to 80% of kids and teens have some type of dental problem that may require braces. However, because a great number of people never fix these issues when they are kids, they can often carry on into adulthood.

When I was a kid, it was not uncommon for kids with braces to be bullied and shamed… but it can be even more embarrassing for an adult sporting a “metal mouth.” 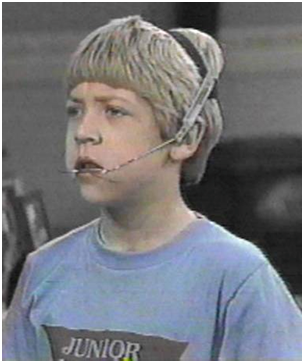 (Personally, the potential embarrassment of wearing metal braces for a year or more was too much for me, and I decided it would be easier to just deal with a few imperfect teeth.)

This might all sound depressing, but there is a company that is capitalizing on young consumers’ orthodontic needs and, at the same time, satiating the growing number of narcissists in our populace.

ALGN: Groundbreaking Tech For An Age-Old Problem
Ceramic — and, therefore, clear — braces helped to remove some of the stigma, but they were still harsh, wiry appliances that made life difficult for an extended period of time.

Then, over the past decade or so, Align Technology’s (Nasdaq: ALGN) Invisalign system picked up traction within the dental community (and consumers) for both medical and cosmetic tooth position correction.

Invisalign offers a clear (virtually invisible) system of plastic appliances that correct most of the same conditions that traditional braces correct (gapped teeth, overbite, under bite, crowded mouth, etc.). Essentially, it’s a comfortable, removable system that allows patients to brush and floss normally while eschewing all the stress and shame that comes with braces.

While the company has been around since 1997, its latest imaging and production technologies — coupled with competitive prices, financing and critical industry adoption — are all coming together to drive this company to record earnings growth.

Using call options, I think we can turn a modest 11.9% climb in this stock into a 75% gain. The keys to this trade are threefold…

1. Analysts Are All-In On The Stock
The consensus price target for ALGN is nearly $274 — more than 20% higher than the current trading price! What’s more is that, of the 12 analysts who cover the stock, 11 rate it a “buy” and only one rates it a “hold.” There are no “sell” ratings.

In that same vein, it’s also important to note that estimates for growth are tempered in 2018, with earnings per share (EPS) only expected to increase 19.9% in 2018 — in other words, the bar is set relatively low.

2. ALGN Is “Best In Breed”
Align Technology not only created this space, but it also has patent protection and name recognition. While the company does have a few competitors, Align built a solid foundation with orthodontists early on to ensure providers were familiar with its products. Since the beginning, the company has vehemently defended its patents and guarded its turf.

Over time, the price of Invisalign has come down; it’s now about the same price as metal or ceramic braces. As more and more consumers realize this, I think previous technologies will be forced into relative obsolescence. Several experts and analysts agree.

Align Technology now offers “Invisalign Express,” an affordable option for those who have more minor dental issues. This, along with its flagship product, will help push ALGN further toward mass adoption. It also is a perfect fit for those narcissistic folks I was referencing earlier.

3. My Models Predict An Earnings Beat Jan. 30
Even with over a month to go, my proprietary models show a very high likelihood that ALGN will top analysts’ estimates.

Currently, analysts expect ALGN to report EPS of $0.96 for the fourth quarter. My models anticipate EPS of $1.04. Zack’s ESP (Earnings Surprise Prediction) anticipates an earnings beat of 6.25%, or approximately EPS of $1.02 for Q4. Zack’s also rates ALGN a “strong buy.”

At the end of the day, ALGN is positioned well. The company has just started expanding into international markets over the past few years, and China is already ALGN’s biggest growth market behind the United States.

As global economic growth continues and governments flood their respective economies with stimulus and debt, consumers are feeling confident and want to look as good as our favorite celebrities, even if we’re anything but!

The way I see it, there’s no reason ALGN can’t get back to $255 by April. Shares traded above that level as recently as November, and analysts believe ALGN could trade much higher — a target of $250 would still be about 10% below the consensus estimate. 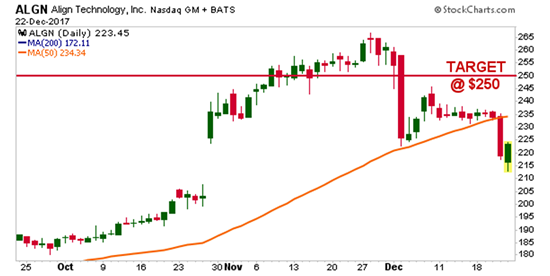 An 11.9% rally to that level will elicit cheers from investors that buy the stock now. But their gains will be nothing compared to what my Profit Amplifier readers and I stand to earn.

Using our option-buying strategy, we can amplify this 11.9% bump in ALGN’s price into a market-crushing 75.4%. If you annualize this return, it works out to an almost unbelievable 229.5%. Sounds crazy right? It isn’t — Wall Street uses the same strategy every day.

And even if I’m wrong, this trade is already breaking even assuming current prices hold or increase, which seems almost inevitable given ALGN’s recent successes and investor confidence.

While the rest of the crowd is simply buying stocks and hoping for the best, my subscribers and I have spent years “raiding” the market with our simple options trades, taking more than our fair share of gains. I’m talking about returns of 35% in six days, 29% in four days, 31% in 10 days and 27% in seven days, just to name a few.