Without great American innovators like Thomas Edison, Nikola Tesla, Benjamin Franklin, and Alexander Graham Bell, the United States wouldn’t be the country it is today.

The same goes for Apple’s Steve Jobs, Microsoft’s Bill Gates, Amazon’s Jeff Bezos, Google’s Larry Page and Sergey Brin, and Facebook’s Mark Zuckerberg. These individuals have revolutionized entire industries and markets… and thanks to them and their companies and innovations, they’ve made investors extremely wealthy along the way.

Of course, it’s not easy to identify the next great innovator until the lion’s share of the wealth has been made. But what we can do is use the blueprints left in the wake of these disruptors to help us find that next great innovative company.

The idea of investing in innovative firms is by no means a new concept. It’s been talked about before. And while I can’t give away the details on my latest pick, which is definitely an innovator, I can tell you about one we’ve held in my Top Stock Advisor portfolio for quite some time.

We even dubbed it the “The Most Innovative Company in America” in Top Stock Advisor — and I think it gives a perfect illustration of just how powerful innovative companies can be for your portfolio.

Our guideline in this case is CME Group (NYSE: CME), which has generated a total return of 146.4% since it was added to the Top Stock Advisor portfolio in August 2014. 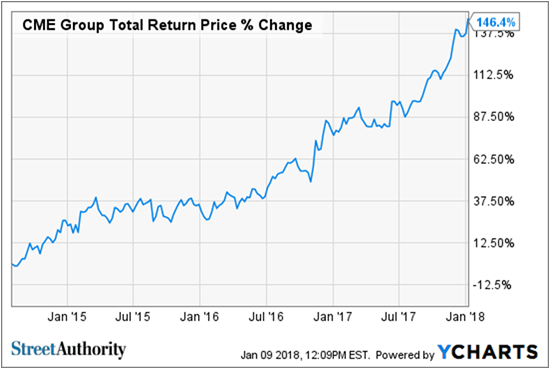 Let’s back up and quickly look at how CME Group innovated itself into the world’s largest options and futures exchange… because my latest pick is taking a page out of CME’s book.

The Beginning Of A Great American Innovator
In the 19th century, Chicago was a hub for merchants trading items like corn, wheat, crackers, cheese, liquor, hides — you name it.

Back then, many farmers couldn’t transport their crops during the brutal winters. They were forced to store their commodities until the canals and rivers thawed and allowed them to transport their goods. When sellers would converge on Chicago with last year’s crops, the influx in supply would cause wild swings and instability in grain prices, which made things difficult for both farmers and merchants.

On March 13, 1851, everything changed. A seller promised to deliver 3,000 bushels of corn in June (three months away) for one cent per bushel less than the prevailing March price. This “future” contract paved the way for how merchants would exchange goods going forward, bringing a measure of stability for both farmers and crop buyers.

Before long, speculators noticed an opportunity to make money by guessing the direction of corn prices. They figured would be able to offset their positions before having to take or make delivery of the physical commodity.

A single contract would pass through a half dozen hands before ending up with a merchant who actually wanted the corn.

All the action took place at the Chicago Board of Trade, which until that time had simply been a room above a flour shop used as a meeting place for local businessmen. With the advent of futures trading, it became so crowded they had to move locations several times.

The Trading Floor of the Chicago Board of Trade, circa 1905 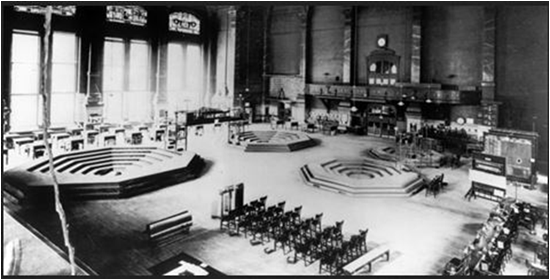 The Chicago Board of Trade inspired the creation of the Chicago Egg and Butter Board, a trading group for other key agricultural commodities, which later morphed into the rival Chicago Mercantile Exchange.

These exchanges endured and flourished because they continuously sought out innovative new markets.

Throughout the late 20th century, these two exchanges added futures contracts for non-agricultural products (like silver), mortgage interest rates, foreign currencies, and, most critically, U.S. stocks and market indexes, which today are stalwarts of the investing world.

And it certainly didn’t stop there. Just last month the CME launched a market for bitcoin futures.

When students of the market think of innovative companies, sometimes firms like CME are forgotten, simply because they didn’t create a product that we physically use, like the light bulb or television or computer. But CME found a solution to a problem that merchants were having. It created an exchange for producers and buyers to easily — and confidently — exchange goods. And by continually offering innovative new products over the decades, CME turned into a $50 billion company.

And my latest pick is looking to do the same thing with another lucrative financial market… a market that Bloomberg estimates eclipses $100 trillion, dwarfing the roughly $65 trillion stock market.

I’m talking about the bond market… and believe it or not, but this market is ripe for innovation, as it has essentially operated the same way for nearly seven centuries.

The Stone-Age Bond Market
Imagine that if for each stock you wanted to buy you had to call up Charles Schwab, E*Trade and Fidelity to get a quote for the stock. They tell you they will get back to you in a couple of days. Each of them comes back with different prices, plus different transaction costs.

That would be asinine.

But this almost exactly how modern-day bond-trading works. It’s a problem that traders in a truly enormous market have that can easily be simplified with an innovative new trading platform. See where I’m going with this?

My pick this week has created a faster, more centralized marketplace for bond traders… and it’s led by a guy who once worked the trading floors of the Chicago Mercantile Exchange (CME). Better yet, recently passed regulations could force traders’ hands in joining this new system.

That makes now the perfect time to hitch your wagon to this revolutionary company. And while revealing the name here would be unfair to my premium Top Stock Advisor subscribers, there’s a way you can access it today.

My research team and I just released our newest report: The Top 10 Stocks For 2018. While nothing is certain, we’re convinced — based on our cumulative decades of experience and expertise — that these stocks are your best bet for building wealth in 2018 and beyond.

You’ll find all the details of every one of our 10 picks in this brand-new report. And we’d like to share it, with absolutely no risk to you. All we ask is that you try a 90-day, no obligation trial membership to Top Stock Advisor, including access to the pick mentioned above, just to see if you like it. Even if you don’t, you can keep the report as a free gift.