This Sector Could Lead The Pack In 2018

2018 is starting off right where 2017 finished, with markets notching new highs on a near-daily basis. And even though we’re early in the year, I believe I’ve come across an important indication of what’s to come. More specifically, I think I’ve found what sector could lead the pack in 2018.

I don’t typically make these sorts of proclamations, but two stocks I found within this sector could represent my most lucrative trades of 2018. It’s a bold statement to make this early in the year, but I’ll show you why catching just one big uptrend could easily provide a windfall of gains in a short amount of time.

I’m talking about the commodities sector.

When we say “commodities,” we’re talking about a wide range of goods and resources, everything from livestock to grains to oil to precious and industrial metals. And while the two stocks my proprietary Maximum Profit system tagged last week come from different subsets of the commodities sector, their setups are very similar.

#-ad_banner-#First let’s talk about oil and the energy sector.

Life in the oil industry has been tough since the price of crude oil fell from north of $100 per barrel in 2014 to less than $40 per barrel by the end of 2015. Many small oil exploration and production companies went belly up since they couldn’t turn a profit with such low oil prices. The effects rippled throughout the entire energy sector. As you can see in the chart below, the Energy Select Sector SPDR ETF (NYSE: XLE) tumbled 45% from its 2014 highs to its 2016 lows: 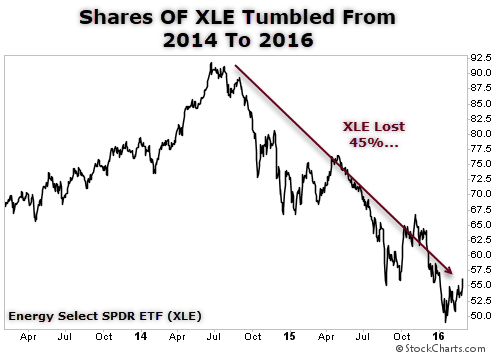 Since then, the price of oil had more or less been range-bound, trading between $40 and $55 a barrel. But starting at the end of last year, the price of that sweet West Texas Intermediate (WTI) oil ticked closer to $60 a barrel. Once it breached that mark, it quickly climbed to $63. Today it’s trading for over $64 per barrel.

And if history is any guide, we could see some spectacular returns on the horizon.

For instance, when oil (and the market) tanked during the Dot-com bubble in the early 2000s, XLE tumbled about 50%, but then ripped off a gain of more than 325% over the next five years. Similar story when the financial crisis hit in 2008… XLE tumbled, but after the dust settled and the price of oil rallied, so too did XLE, jumping 345% over the ensuing five years. 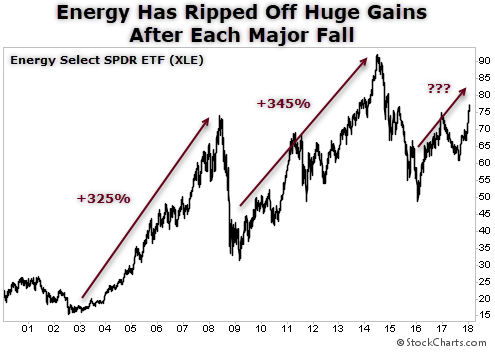 Today we have a similar setup in the energy sector. And I think 2018 could be a big year for XLE and energy stocks.

My Maximum Profit system just flagged one stock in the energy sector that could lead the pack. Shares are creating new 52-week highs, the price of oil is climbing, sales are rebounding, and the company has doubled cash flow over the last 12 months. So it’s no surprise that my system flagged this stock as a buy.

Unfortunately, it wouldn’t be fair to my premium subscribers to share this pick. They pay good money to use the system to make gains of 181% with Lannett… 90% with Electronic Arts… 72% with Alcoa… 135% with Westmoreland Coal — and more.

If you’d like to learn more about how the system works and get your hands on my latest picks, go here.