It’s no secret that starting a business is a daunting task. After all, about 50% of new businesses fail within five years. And as you can see from the Bureau of Labor Statistics chart below, that number is expected to grow to more than 80% over the next two decades. 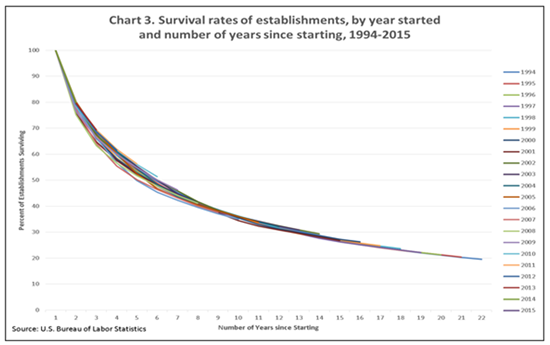 Now, let’s be clear. The chart actually shows how many companies were still in business from one year to the next. But that doesn’t mean that all of them failed.

You see, some businesses merged with other companies, while others saw their owners retire and close the doors. So the numbers are a bit skewed. Still, the odds of starting a successful business for the long term are stacked against entrepreneurs.

What may not be apparent in this BLS chart is that these stats apply equally to all companies — not just mom and pop businesses. In other words, government bureaucrats were following companies with billion dollar capitalizations as well — including the once formidable tech company, Yahoo!

#-ad_banner-#Yahoo started as a list of websites called “Jerry and David’s Guide to the World Wide Web” created by a couple of engineering students at Stanford in 1994. Fast forward just five years and the company had a market cap approaching $120 billion.

Still, the company foundered for two decades until being bought up by Verizon (NYSE: VZ) in 2017 for a fraction of its previous value. The question is why…

It was this lack of focus that gave rise to the infamous Peanut Butter Manifesto by a company officer in 2006. Of course, it’s a sad indictment on Yahoo’s management team — and for its investors, it’s an unforgivable mistake.

And yet, Yahoo isn’t alone. There are plenty of companies struggling to articulate and employ an actionable business plan. One such company is Twitter (NYSE: TWTR). The company has been operating for years with no discernible ability to fully monetize its business.

But that doesn’t mean investors should avoid Twitter shares. The stock performed well in 2017, strongly aided by analyst upgrades in the last half of the year. Shares rose 47.3% in 2017. 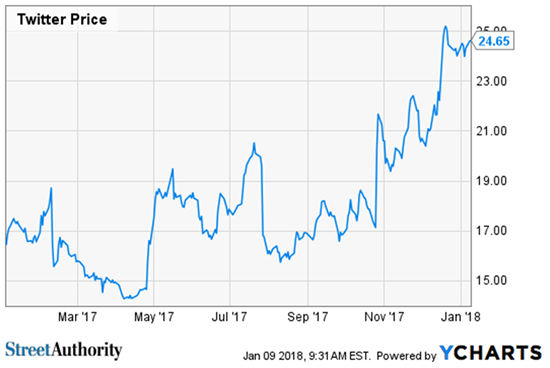 Now it’s true, a great many mediocre stocks did well in 2017. So the real question is whether Twitter can continue its forward momentum in 2018. Let me explain why I don’t see that happening.

Without a clear focus on what the company does, Twitter has the potential to run the same course as Yahoo. And there’s still no evidence that management has figured out the company’s core function.

Twitter’s management thinks of the company in three distinct ways: as a news app, a social networking site, and a data licensing company. And while Twitter does each of these things, they don’t do any of them particularly well.

This problem is reflected in a report by the marketing agency Mediakix, wherein the average Twitter user spends just 60 seconds a day on the app. This compares to 40 minutes being spent each day on You Tube, 35 minutes on Facebook (Nasdaq: FB), and 25 on Snapchat (Nasdaq: SNAP). In other words, Twitter can’t compete.

These paltry numbers don’t bode well for any company — whether a social networking site or news app. And given that TWTR isn’t likely to grow its user base to more than 72 million or so, there’s nothing to push that needle higher.

So this begs the question: What’s does the future hold for Twitter?

Since many analysts expect that 2018 will be the year that Twitter finally achieves GAAP profitability, investors should expect that Twitter gets bought up by someone. And for investors, that’s about the best outcome.

The company has never fully figured out how to monetize its core business. But there are other companies that won’t have any trouble seeing Twitter’s true value. And with a market capitalization of less than $20 billion, the company can be picked up for a song.

And there’s no shortage of potential suitors, either. While I won’t bore you with a long list of companies who might benefit from owning Twitter, there’s one company that sticks out in my mind: Bloomberg.

It’s no secret that Twitter management likes the idea of being a news app. And this plays to one of their strengths: being the first to report significant breaking news. Of course, the synergies of combining global breaking news with data licensing is a natural fit for Bloomberg.

But a deal makes sense for Twitter investors, too. On its own, Twitter will never achieve its goal of sustainable growth and continued profits. Making this task even more difficult is the problem that as many as 5% of all Twitter accounts are fake, meaning Twitter is meaningfully overstating its numbers.

All this means that without an actionable plan to go grow its user base, ad revenues will continue to stagnate or decline, leaving shareholders holding the bag.

The writing is on the wall. As an investment, Twitter’s value is as a takeover target. And based on that factor alone, I’m bullish on TWTR shares.

But if no buyer appears in the next 12 to 18 months, investors risk experiencing the same fate as Yahoo — a slow, painful death for a once-promising company.

Risks To Consider: Twitter has been unable to grow its user base materially. And given that up to 5% of its users are fake accounts, the company’s growth rates are actually overstated. Without a buyer, Twitter will languish until, like Yahoo, the stock is bought at a steep discount or the company shutters its doors.

Action To Take: Buy Twitter on the dips up to $25 per share. Use a trailing stop of 20% to protect your principal. This is a short-term investment with a holding period of less than two years. If Twitter isn’t purchased by mid-2019, sell your position.

Editor’s Note: You know how in sports, some players unintentionally signal what they’re about to do next. Like when a pitcher accidentally lets a batter see his grip on the ball before he throws it. Well this kind of “tell” doesn’t only happen in sports… but in the stock market too! And if you can spot this subtle sign… you’ll know exactly what a stock will do… before it makes its move. Here’s how you can spot it too…