The ‘Trump’ Card No One Is Playing… Yet

From Day 1, Trump has promised big things for the economy. Though the mechanisms of action have been questionable, the President has managed to spur growth in not just the stock market (with a 20.4% annual gain) but in the broader economy as well.

Tax cuts, regulatory reductions, and promises of pro-growth policies all helped push the economy back into very healthy 3% growth territory. Even after the surprise turnaround, Trump still believes there’s much more room to grow, as do many market participants. Trump is even predicting 6% GDP growth — a forecast that defies logic — but as long as GDP can hit around 3%-4% and confidence remains high, there are several sectors that still have serious potential.

Now that the foundation for growth has been established, it’s time for the administration to conquer the country’s crumbling infrastructure — bridges, highways, dams and the like. Ignoring these issues could undo a good portion of Trump’s work, but proper execution could just be the catalyst for that 6% growth he’s dreaming about.

Correcting our infrastructure issues was a top campaign priority for Trump and remains high on the list. And for good reason: 73% of our nation’s roads are in mediocre or poor shape… 70,000 bridges are structurally deficient… and experts estimate it will require at least $45 billion just to repair “high-hazard” dams. 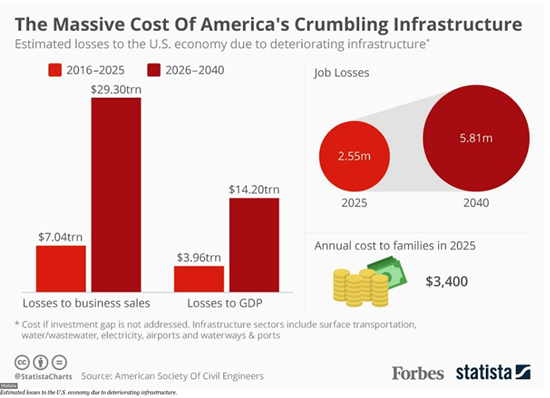 #-ad_banner-#Between critical bridge collapses, roadway failures that cause massive traffic backups, chemical spills and dam breaches, our “D” rated infrastructure costs the country (and each one of us) lots of money.

The American Society of Civil Engineers estimates that infrastructure issues will cost the average family $3,400 annually by 2025 — 3.4 times the expected tax savings under Trump’s new plan.

But all one needs to do is look east to China to see the results of government infrastructure investment, which stood at an all-time high of 45% of GDP last year. That’s more than double what the United States spends. Through infrastructure spending, China has become the world’s no. 2 economy.

Infrastructure spending is the elixir Trump needs if he’s going to sustain 3% GDP growth, let alone his 6% target. And it’s an elixir that is desperately needed.

If Trump can even execute an infrastructure plan partially, it stands to benefit a small group of stocks. And if he does build his wall, those benefits be more widespread.

But let’s just stick to the probable.

CX: Finding Value In A Sea Of Expensive
Basic materials companies provide infrastructure essentials like concrete, rock, cement and metals. With only 25 stocks that fit the bill, the sector is the second smallest in the S&P 500, yet was still one of the top performers in Q4.

Small is good when it comes to sharing in profits, especially when a stock is already well respected and established among its peers.

As the name suggests, the company was founded in Mexico, but nearly 30% of the company’s sales are from the United States alone, with 25% from Europe, 22% from Mexico and the balance from Asia and Latin America.

What’s most compelling about Cemex is the fact that it’s hands down the cheapest stock in the group. While Martin Marietta (NYSE: MLM), Eagle Materials (NYSE: EXP) and Vulcan Materials (NYSE: VMC) trade at 34, 24 and 45 times earnings, CX trades at just 13.44, with a forward PEG ratio of just 0.55…

Remember that, for PEG ratios, anything under 1 is considered cheap — 0.55 is an extreme value. 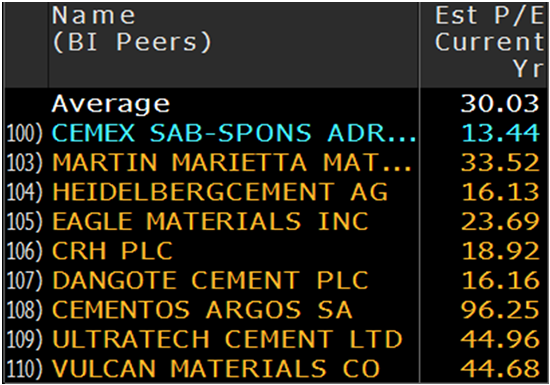 Cemex is a value because of its name and headquarters: Some investors believe that Cemex wouldn’t get a penny of business if a U.S./Mexico wall was built, but that thinking is completely wrong.

Even though Cemex may not be Trump’s first choice for his border wall’s concrete, you can bet on three facts:

1) Cemex is both a play on the United States, the growing health of the European and Mexican economies, and also emerging markets around the world, from Latin America to Asia.

2) Because nearly 30% of the company’s sales are from the United States, investment in infrastructure should bode well for CX’s bottom line. And even if CX doesn’t reap any benefits from a border wall (which I think is incorrect), the company will be needed to fill the gaps in supply for this very limited, niche sector.

3) Analysts are VERY bullish on CX. Every single price target on the stock is above the current price. Even the lowest “hold” rating for the stock comes with a target of $8.40, about 4% above current prices. As shares slid in the back half of the year, most analysts have upgraded the stock.

This is a clear case of negative hype and bias.

I could talk about the company’s other potential growth items, such as decorative aggregates, but for this week’s trade to work out, all we need is for the stock to reach the second-lowest analyst target out there. 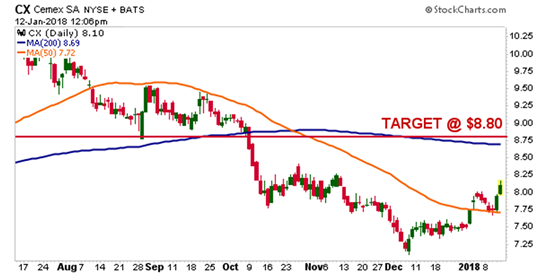 If this still sounds risky to you, maybe because you’re new to options trading, know that this trade breaks even if CX hits $8.35. That’s just 2.3% above recent prices, a move that seems almost inevitable given its recent successes and investor confidence.

How You Can Get In On This Trade
It wouldn’t be fair to my premium Profit Amplifier subscribers to reveal the specifics of this options trade in this article. They’re paying customers, after all. But my proven strategy could be just what you need to make more on your trades than you thought possible.