A recent report by Accenture highlights an amazing statistic. Its research shows that just 15 public, digital-ecosystem companies have a market capitalization totaling nearly $3 trillion. That’s an average size of roughly $200 billion each.

Even more amazing is the idea that the industry is expected to grow at a compound annual growth rate (CAGR) of more than 18% between now and 2026. That makes this a trend every investor should get behind.

So, what is a digital ecosystem?

Gartner Research defines a digital ecosystem as “an interdependent group of enterprises… that share standardized digital platforms for a mutually beneficial purpose.” In English, it means some companies have built digital platforms that customers don’t want to leave. And the longer a person stays on a particular ecosystem, the more revenue that platform generates.

You see, Yahoo failed to learn the lessons of Facebook and Google. The company proved unable to create an ecosystem that would attract and hold their customers’ attention for more than just a few minutes. And, it’s the reason that Twitter is doomed to fail, too. Of course, where Yahoo failed, Facebook killed it.

A look at the WeChat app from Chinese company Tencent perfectly illustrates my point. If you want to call someone, send an e-mail, or pay for a product or service, most people in China do it through the WeChat app on their phone. In fact, there’s no reason to ever leave the app to accomplish a task.

And that one principle has made Tencent one the world’s most valuable companies.

The Dominant Player Still Flying Under The Radar Of Most Investors
Interestingly, it’s the same company that replaced Yahoo on the Nasdaq 100. The company is MercadoLibre (Nasdaq: MELI), headquartered in Buenos Aires, Argentina. And like Yahoo before it, MercadoLibre (“Free Market” in Spanish) was founded in 1999 by a Stanford Graduate student, Marcos Galperin. 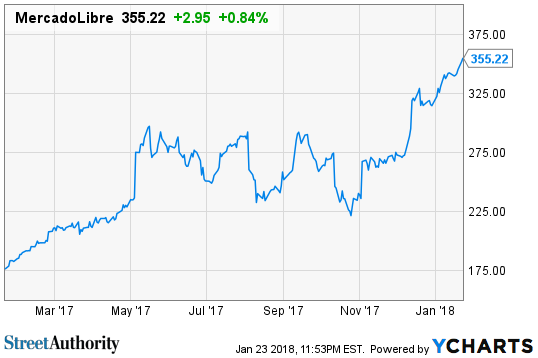 Fast-forward two decades and Galperin still heads MercadoLibre. How has that worked out?

In the twenty years since its founding, MercadoLibre has grown into the largest e-commerce company in Latin America. It is the undisputed leader in each of the 18 countries in which it operates.

MercadoLibre now boasts more than 200 million users in Latin America. The company expects that number to grow as a greater share of the Latin America population moves from traditional commerce to internet-based commerce.

The chart below from MercadoLibre’s investor presentation illustrates the expected growth of e-commerce in Latin America. 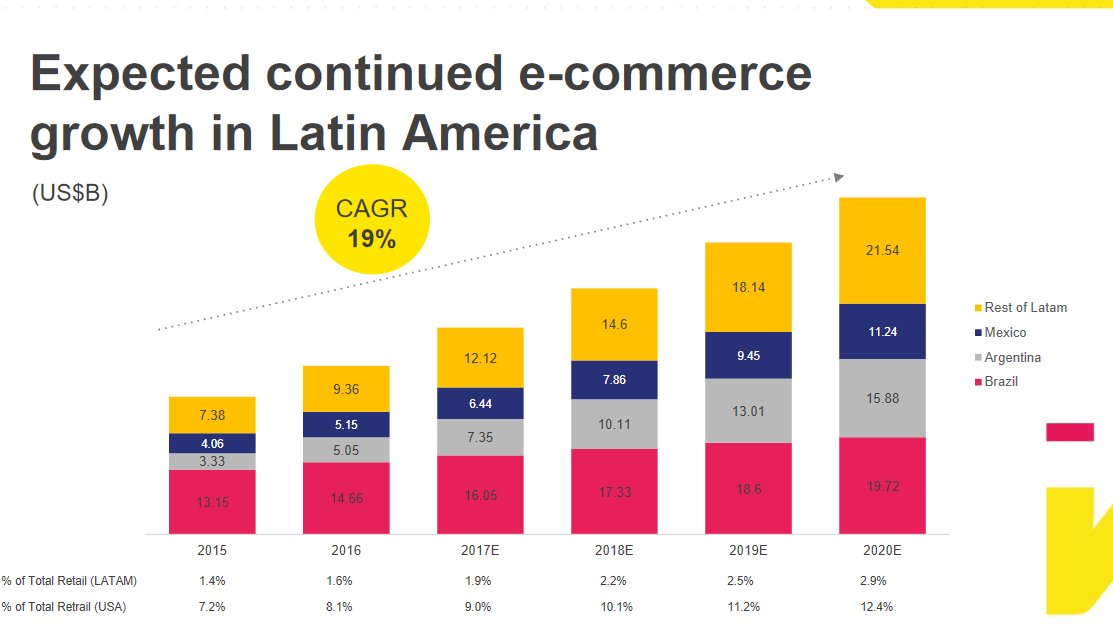 As the biggest player in Latin America, MELI expects to garner the single-largest share of the newcomers to e-commerce in Latin America. This will virtually guarantee that the company can continue its already impressive growth rate, which has averaged 18.9% since 2011. 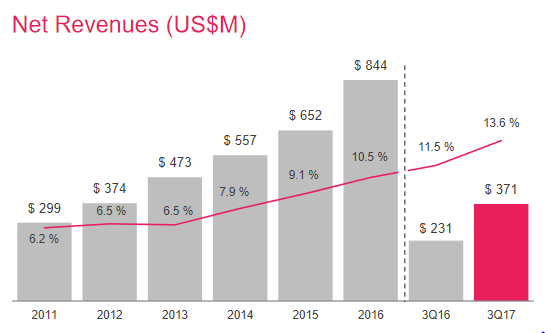 Its revenue growth of more than 60% in the most recent quarter means the company is growing even faster than Tencent and Alibaba.

Now, don’t make the mistake of thinking that growth rate isn’t sustainable. MercadoLibre is doing what Yahoo and Twitter failed to accomplish. They’re growing their ecosystem to keep its customers on the platform longer.

The company created its own payment system called MercadoPago (“Mercado Payment”). This is the equivalent of PayPal (Nasdaq: PYPL) in the States. Given that Brazil alone is the ninth-largest e-commerce economy on the planet — even though only 9% of the population uses an internet payment processor to pay bills — this will be huge money maker for MercadoLibre.

Perhaps that’s why Bloomberg expects the company to grow by 35% in 2018, and by another 28% in 2019. They also see the company’s profit margin expanding to 57.4% by 2019. That’s the kind of growth any growth investor worth his salt would like to see. But to see such growth from a 20-year old company is icing on the cake.

MercadoLibre is relatively unknown to most investors. But it’s the dominant player in Latin America with an almost impenetrable ecosystem moat that will rocket the company exponentially higher in the coming years. And while MercadoLibre will never be the size of Tencent or Alibaba, the company’s market value will certainly grow from here.

Simply put, MercadoLibre is a must-own stock for every growth investor. It has the goods.

Risks To Consider: There are two potential headwinds that MercadoLibre faces. The first is direct competition with Amazon. In fact, Amazon has recently become the largest online retailer in Mexico. However, MELI has developed an ecosystem that will keep the company in the lead, largely because they speak the language and fully understand the nuances of the different regulations impacting all of Latin America.

Additionally, the company is impacted by the sharp rise in the dollar against the currencies of its three largest customer bases — Brazil, Argentina, and Mexico (a combined 92.6% of its revenue). It will require better currency hedging to offset potential losses.

Action To Take: Buy shares of MercadoLibre and hold for long-term growth. Despite being a 20-year old company, the investment thesis is based on MELI as a growth stock. Plan to hold the position for at least 3 to 5 years. Mitigate your risk by applying no more than 3% of your portfolio to shares of MELI. Lastly, use a 25% trailing stop-loss to protect your portfolio.

Editor’s Note: It’s the most surprising portfolio most investors won’t invest in… though some of these blue-chips have doubled the market each of the past three years. Click here for the full report: The Top 10 Stocks for 2018.