Which Sectors Are Truly A Bargain?

The historic bull market is entering its ninth year and signs of stretched stock prices are everywhere.

A slightly higher inflation number and bond rates sent the markets into a tailspin early February even as fourth-quarter earnings showed some of the strongest profits in a decade.

#-ad_banner-#The market has been rewarding good news less and punishing companies that can’t live up to investors’ expectations, a clear sign of sentiment turning sour. Companies that beat expectations for fourth-quarter earnings saw their share price decrease an average of 0.4% from the two days before through the two days after their release.

In this environment, value investing might just come back in vogue after nearly a decade of lagging behind the growth investing theme.

A return to investing in companies with solid fundamentals and stock prices based on valuation rather than the promise of growth could help avoid the worst of a market crash when investor sentiment turns south.

But are you following the wrong fundamentals when you’re looking for value stocks? Are you comparing a company’s returns and price multiples against what really matters?

Most Investors Do Value Investing Wrong
Many value investors start with a simple screen for sectors with low price-to-earnings multiples and that perhaps haven’t participated in the market’s wild ride higher.

Just looking at relative returns and price multiples across sectors doesn’t tell the whole story though. Investing in a sector simply because it had a bad year last year could overlook the fact that it has surged higher over recent years, taking valuations to nosebleed levels.

Investors like to rebalance on one-year returns, away from sectors or stocks that have outperformed and into underperforming assets, ignoring the fact that some sectors tend to post higher returns.

Investors can also fall into the trap of comparing price multiples across sectors which leads to an overweight in sectors that typically have lower price-earnings like financials, telecom and utilities.

Looking at a sector’s performance against its own long-term return average can help more intelligently rebalance into sectors primed to rebound. Similarly, comparing a sector’s valuation with its own historic price multiples will better rebalance your portfolio into relative value.

3 (Relatively) Cheap Stock Sectors
Finding stock sectors on the cheap gets harder every year as we progress into what could be the longest bull market in history. The market zoomed higher last year and every sector trades above its long-term average on a forward price-to-earnings basis.

Analysts are expecting earnings for companies in the S&P 500 to jump by 17.9% this year on revenue growth of 6.6%. Both are well above last year’s performance so it’s not surprising that the market is trading at 17.1 times expected earnings, a 20% premium on its 10-year average of 14.3 times.

Among the nine sectors, three trade relatively cheaply. More than just relative price though, all three have compelling catalysts that could break the cycle of underperformance to reward investors. 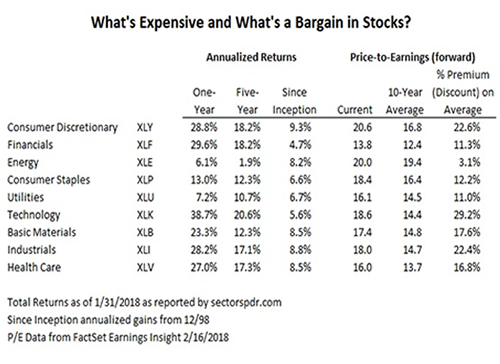 Energy is the only sector to underperform its long-term return last year. The Energy Select Sector SPDR ETF (NYSE: XLE) returned just 6.1% last year despite some promising growth in the fourth quarter.The sector reported the third-highest beat on expectations in the most recent quarter and the highest earnings growth in the market. Companies in the sector reported a 121% surge in profits compared to a horrible 4Q in 2016 and 86% of firms beat sales expectations for the quarter.

Energy is still recovering from the 2014 disaster in prices. Capital spending was cut drastically through 2016 and the sector was forced to learn how to live on less revenue. That meant widespread cost-cutting and productivity programs that boosted profitability that could continue to benefit the sector for years to come.

The sector offers the lowest premium on its long-term earnings multiple, just 3% over the 10-year average forward P/E ratio, and pays an attractive 2.9% dividend.

No sector faces sentiment as bearish as utilities with just 40% of companies in the group beating revenue expectations in the fourth quarter, the lowest of nine sectors. Just 38% of the analyst ratings on utilities companies are rated buy versus 51% of the ratings for the entire market, as measured by 11,103 ratings tracked by FactSet Research.

But that weakness has made the sector relatively cheap and we could be on the verge of a long cycle of support.

Fidelity reports that for much of the last decade, production capacity at utilities has far outstripped demand. This has weighed on pricing and limited returns in the sector. Massive closures of coal and nuclear plants on weak profit margins has begun to shift the supply-demand picture to less of an over-supplied market and could start to support stronger pricing power.

The sector is priced just 11% above its long-term forward earnings multiple, the second-lowest in the market, and last year’s return was less than a percent over the long-term average. The Utilities Select Sector ETF (NYSE: XLU) pays a 3.4% dividend, twice the 1.7% yield on the S&P 500.

Shares in the financials sector jumped last year but still trade at the third-lowest premium on its long-term forward multiple. That could mean returns still have a ways to go as fundamentals line up for companies in the sector.

Financials reported the fourth-highest earnings growth in the fourth quarter (15.1%) after energy, materials and technology. All five industries within the sector reported earnings growth led by insurance (38%), consumer finance (19%) and banks (12%).

A dramatic rise in long-term rates in the fourth quarter is a positive for banks that lend on longer rates as they pay interest on short-term rates. Momentum is building for deregulation in the banking sector and a rollback of Dodd-Frank legislation.

The Financial Select Sector SPDR (NYSE: XLF) only pays a 1.4% dividend yield but cash return could increase as deregulation frees up more cash in the sector.

The Two Most Expensive Stock Sectors
Nearly every sector may look pricey to the most hardened value investor but there are two that stick out as especially expensive.

Shares of companies in consumer discretionary shot up last year at a rate almost three-times the long-term average and command the second-highest premium on forward earnings. Surging stock prices have driven the yield on the Consumer Discretionary Select Sector SPDR (NYSE: XLY) to just 1.1%, the lowest among the nine major sectors.

The retail nightmare is not over. Companies in the sector have bounced off a disastrous couple of years but there could be more pain to come and e-commerce doesn’t bear all the blame.

Baby boomers are being forced to cut back on spending as they retire on tragically-low saving, and millennials have shown a preference to buy experiences rather than things.

The Bureau of Economic Analysis reports that spending on clothing & footwear as a percentage of personal consumption had dropped from 5% in 1990 to just 3% today, and we see that downward trend in many retailers. Spending in recreational services and gambling are two of the only industries to see increased spending as a percentage of total.

Shares of the Industrials Select Sector SPDR (NYSE: XLI) returned 28% over the year to mid-February and the sector trades a premium of 22% on its long-term forward multiple.

Industrials could be the “canary in the coal mine” when tighter monetary policy starts to weigh on the global economy. All developed economies are either restricting monetary growth or talking about it, with the U.S. Fed leading the way and expected to raise rates three times this year. China has recently started trying to cool its housing market with tougher policy and monetary authorities in Japan and Europe are talking about an end to easy money policies.

Industrial spending is a leading indicator on the economy and could be the first to drop, sending shares in the sector down with it, when global economic growth does slow.

Risks To Consider: Sectors can fall out of favor for a number of reasons and can stay there for an extended period of time.

Action To Take: Compare sectors’ performance with historical returns and price multiples for a deeper look at value for rebalancing.

Tomorrow at 1 p.m. EST, Andy Obermueller is going to hit the stage and go public with the most exciting situation he’s come across in his 20-year career. That’s less than 24 hours from now. Don’t miss what he’s calling the most lucrative situation he’s ever found. He predicts a 2,255% gain on this one. Register right now, and you won’t miss a thing.