If you discovered the key to making a fortune trading stocks, would you share it with the world?

Why So-Called Market “Edges” Soon Disappear
Back in 1981, an academic named Rolf Banz published a paper on something called the “small-firm effect.” It showed that buying small-cap stocks generated “abnormal returns,” even when adjusted for risk.

#-ad_banner-#At around the same time, researchers uncovered the “value effect,” which showed that buying stocks with low P/E ratios earned market-beating returns.
But when these two market-beating effects were widely publicized, these supposed advantages just… vanished.

You may have heard of the “Dogs of the Dow.” This strategy was made famous by investment manager Michael O’Higgins in 1991 with his landmark book, “Beating the Dow.”

The Dogs strategy goes like this… Each year, you take the 10 highest-yielding Dow stocks and buy them. The theory, according to O’Higgins, was simply that these stocks were oversold in the prior year and were likely to outperform in the next year. The logic made sense. After all, there were established Dow components, and management clearly believed in them enough to keep paying a healthy dividend. Not only that, but the natural cycle of business would suggest that tomorrow’s winners might be yesterday’s losers, especially when you’re talking about large companies that have been around for decades, if not longer.

The strategy worked well, for a while. Back-testing showed that this simple strategy beat the market going all the way back to the 1920s. O’Higgins had been using it for years, dazzling clients with big, consistent returns.

But once again, the very year after the book revealed the strategy, performance lagged. The strategy failed to survive the dot-com bust and the financial crisis, and has performed unevenly at best over the past few years.

So why does this happen?

Once the strategies are made public, everybody starts doing it.

G. William Schwert, professor of finance at the University of Rochester, explains: “After they are documented and analyzed in the academic literature, [market-beating strategies] often seem to disappear…”

He concluded, “The activities of practitioners who implement [market-beating strategies] to take advantage of anomalous [market] behavior can cause the anomalies to disappear…”

In other words, as more and more people start doing it, it becomes harder and harder to find hidden opportunities. That’s how free and open markets work, folks.
It’s for that reason my colleague Jimmy Butts will NEVER allow his “MP Score” strategy to be widely known. Only a few hundred select, premium subscribers (as well as those of us who helped Jimmy develop the system) will know the exact details of how it works.

Everybody else will be in the dark.

That sounds harsh, but that’s the way it has to be.

The Most Accurate System In StreetAuthority History…
After all, in just a few short months after developing the MP Score, it had already proved itself as the most accurate — and profitable — indicator in StreetAthority’s history.
It’s tagged over 100 stocks right before they broke out. And for three years in a row, this indicator spotted several of the best-performing stocks of the year — including stocks that went on to gain as much as 266%.

So what’s the secret? It has nothing to do with options, buying or selling puts, taking out a margin account, or anything remotely complicated or risky. While we can’t give away everything, what I can tell you is that it the system relies on two triggers that have been independently verified by academics to sidestep market crashes.
Take what happened with Starbucks (NYSE: SBUX) for example…

If you’re like most investors, a couple years ago you probably thought that there wouldn’t be much meat left on the bone with a company like this. After all, we’re talking about a household name with locations on every street corner.

We spotted the opportunity not because our analysts had some kind of rare insight. Quite the contrary. It was all thanks to the cold indifference of the MP Score.

You see, the system doesn’t care whether a stock is a little-known, under-the-radar company — or already a household name… it only cares about the system’s two “triggers” that signal a “buy.”

When we ran the numbers, it was clear what needed to be done. So we issued our recommendation to buy SBUX.

It just so happened that Starbucks was right in the middle of a massive new growth spurt. The company was seeing new success with additions to its menus at existing stores, and also entering a new phase of global expansion, similar to what McDonalds went through about 15 years before. This led to shares of SBUX soaring by almost 50% before we sold a year later. 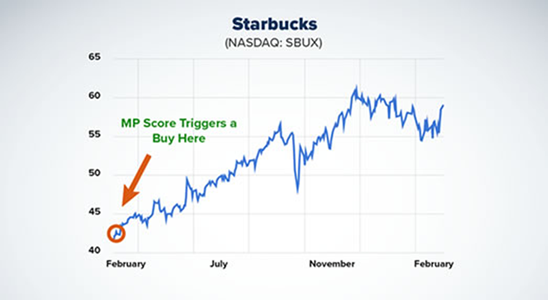 Like I said, this was all thanks to the two triggers used by the MP Score. It didn’t have to do with any sort of special insight or overly complex trading strategy. We just relied on two of the market’s most effective indicators, proven by academics and real-world results. (But, lucky for us, the cat isn’t out of the bag… yet.)

Our team has been studying and refining these triggers for years. They’ve proven to work during bull markets, bear markets, wars, market bubbles, inflation and deflation.

“MP Trigger #1”
Investing legend James O’Shaughnessy famously tested over 60 different market triggers going all the way back to 1926. He conducted exhaustive back-tests of various fundamental and technical variables to identify which, if any, predicted future performance.

His research concluded that Trigger #1 outperformed all others and consistently beat the market by a huge margin. 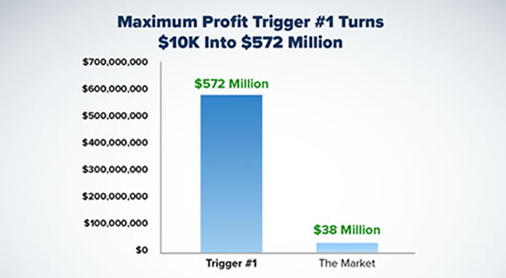 Now you’d think a finding like this would be getting more attention. It should be plastered all over every financial website, every TV show that talks about the market, and in every book on “beating the street.”

But for some reason, it’s not. It just simply hasn’t caught on yet.

O’Shaughnessy found that stocks with a high reading on this indicator not only beat the market, but they also have a higher level of safety. Going back to 1964, these stocks were, on average, 11% less volatile per year than the market.

To be clear, this trigger has nothing to do with common metrics like the P/E ratio or earnings per share. Those can be manipulated. Enron, after all, had strong earnings before it plunged.

That’s not the case with “MP Trigger #2.” This indicator gives a clear indication of just how well a company is doing. It can’t be fudged. But, yet again, the Wall Street analyst community and the mainstream financial media seem almost hell-bent on ignoring it.

Of course, occasionally there are small losses. After all, Insiders, I know you’ve heard us say this before… NOTHING is guaranteed in the market. And investing always involves risk.

But with this trigger, we’re talking about pure fundamentals here. And over time, this fundamental almost always wins.

Want In On The Secret?
The point is, the MP Score has beaten the market in the long and short term, with all different kinds of stocks. The system simply gives out an MP Score for a stock, and you either buy, sell or do nothing. It’s that simple. So no matter what kind of investor you are — you should give it a look.
Right out of the gate, the MP Score churned out a 20% gain in 14 days and a 19% gain in seven days. And since then, many stocks have gone on to boast 33%… 119%… even 266% gains — all in less than a year.

But if you take one thing away from today’s essay, it should be this. When you come across a market-beating “edge,” you want as few people as possible to know about it. There are a couple others out there worth talking about, but we think this is the best one. And what’s more, not many people know about it.

That’s why we’re opening up slots to Jimmy Butts’ service for a limited time only. We do this every six months or so — we take on new clients for a risk-free trial, and then shut down access.

The system is just too successful to make it widely publicized. Because once this catches on with the broader public, it’ll be too late.

You can learn more about the strategy — including how to join — at this link.