2 Major Market Headwinds — Are They Threats?

There’s a long list of headwinds facing the stock market. They include everything from rising interest rates and oil prices to Donald Trump’s Twitter account. But the most important question facing investors right now is whether these headwinds are hazardous to investor portfolios.

#-ad_banner-#So, let’s look at some of the most important headwinds facing the stock market. Specifically, which of them pose the greatest threat to the market and which are mostly no cause for alarm.

Interest Rates
The 10-year Treasury hit the 3% mark last Tuesday. It’s the first time since 2014 the 10-year has hit this level. Of course, higher rates means increased borrowing costs are on tap for American consumers and corporations alike.

Now, most analysts believe the 10-year yield above 3% puts the bull market run in jeopardy. And while there is data to indicate rising rates do materially impact stock market returns, it is more complicated than that.

You see, investors price a company’s stock as the value of all its future cash flows discounted to today. If interest rates go up, those future cash flows are worth materially less today. As such, the market value of stock must fall to compensate for the reduced present value of those cash flows.

But let’s be honest, a 10-year yield at 300 basis points is still low historically. As such, market fears that a 3% note could cause a stock market crash are overblown. This is true despite the likelihood of at least two more interest rate hikes this year.

For my money, a better bond to watch is the 2-year Treasury. You see, that bond has recently risen to the 2.5% level — and, at that yield, the stock market rally could stall. Here’s why… 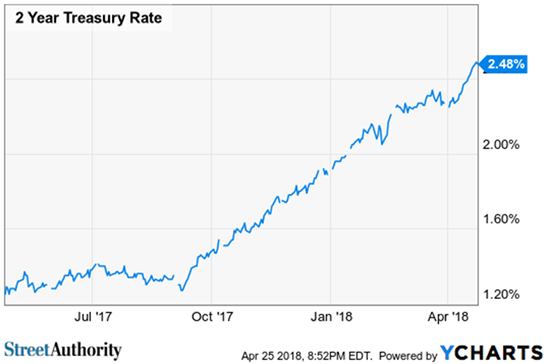 Despite recent market volatility, few equity investors will sell stocks and reinvest in 10-year Treasuries yielding 300 basis points. The yield is only 100 basis points higher than the S&P 500 average, but an investor’s money is locked away for a decade. It just doesn’t make financial sense to do this.

On the other hand, the 2-year Treasury yields nearly 2.5%. And investors with no stomach for market volatility are less hesitant to swap equities for short bonds. And evidence is mounting that many investors are doing just that. You see, equity funds saw outflows of nearly $870 million versus bond inflows of more than $5.2 billion recently. This, more than anything, could derail the rally in stocks.

To mitigate this risk, investors should reduce exposure to high-flying growth stocks that require access to lots of capital. The rising cost of capital will put a collar on how much higher growth stocks can climb. This isn’t true of financial stocks, which benefit from rising rates.

Oil Prices
Oil Prices are another potential headwind to the stock market. 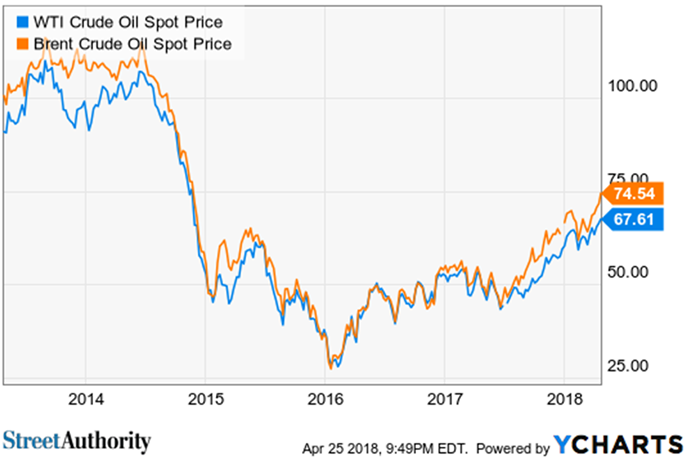 As you can see from the chart above, both West Texas Intermediate (WTI) and ICE Brent (BRENT) have risen to levels not seen since 2014.

Now, conventional wisdom has it that high oil prices are not good for the global economy. And that’s for good reason. You see, oil is inelastic — meaning the demand for oil remains relatively stable despite price increases.

Of course, this means consumers have fewer dollars available for consumption. That is, they will have to cut back on spending to cover the increase in fuel costs. But, just like rising interest rates, rising fuel prices are more complicated than they appear.

That’s because fuel costs can rise for very different reasons. For example, when global conflicts arise, there are real fears that major hits to oil supply are imminent. These so-called shocks rocket oil prices higher. The resulting price changes have the potential to derail an economy.

On the other hand, a growing economy would expect to see oil prices rise. Prices in this scenario rise solely on supply and demand. And that’s what is happening right now.

The economy is cruising along at about 3%. And real wages are starting to increase. So we would expect to see rising demand lifting oil prices.

For confirmation, we could look to the futures market. You see, both Brent and WTI – two of the major oil price benchmarks — are now in the state of backwardation. This means the spot price for oil is higher than the price of oil for delivery in the future (backwardation has a downward sloping curve). It’s a strong signal that the market is tightening, which discourages traders from stockpiling oil.

That doesn’t mean there aren’t industries that will see their margins compress with higher oil prices. Transportation companies such as airlines and freight haulers will see higher nominal costs.

If these costs are transferred to consumers (too early to tell), we’ll see slowdowns in these industries as costs start to rise. Until then, rising oil prices will have no material impact on stocks.

Currently, the spread between the 10-year and 2-year is just 53 basis points — a 45% discount to the long-term average of 96 basis points. As that gap narrows, investors must have a plan of action in place to protect themselves. For now, it’s full steam ahead.

Editor’s Note: Forget options and penny stocks. The market’s BIGGEST profits come from its safest investments — you just have to know where to look. Find out how to cash in HERE.