Inflation, Lower Earnings, Or Both: How To Be Ready

Fears of a trade war have subsided, but recent economic releases may be showing it’s too late to avoid some of the pain.

Signs of inflation have already been creeping higher and price pressures for manufacturers might foreshadow a surge in consumer prices that could force the Fed to increase rates faster than expected.

There are only a few sectors and industries that could escape this lose-lose scenario.

These Two Problems Could Be Bigger Than A Trade War
While we may avoid a full-blown trade war, the prospect of one may have already caused an increase in prices. The Producer Price Index (PPI) measure of input costs has risen in six of the past eight months and import prices have recently jumped the most in six years.

That could be due in part to manufacturers rushing to order inputs ahead of tariffs, inadvertently driving up prices at suppliers.

One measure flashing red is delivery time, which indicates how long it takes vendors to get input products to manufacturers. The measure jumped to its highest point on record since 1968 and is giving input suppliers power to increase prices.

Annual increases in producer costs have been above 3% since 2016, but businesses have been reluctant to pass these increases on to consumers. The Consumer Price Index (CPI) increased 2.35% in March, its highest rate in a year, and year-over-year growth could surge on comparison with last year’s summer drop in cellular pricing. 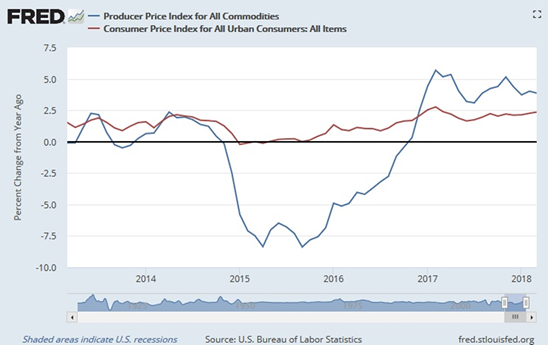 This is all setting up a move to inflation, lower earnings, or both — and the prospect of either looks like it is already weighing on business activity.

Six-month business activity outlook measured by the New York Fed plunged to 18.8 from 44.1 last month, its weakest since February 2016, and the Philly Fed measure of the same survey is also at its lowest since July 2017.

The most likely scenario is that we get a combination of higher prices and slowed earnings growth as businesses try to share the costs with consumers. A problem here is that not only does it decrease profit margin,  but it also forces the Fed to stay vigilant on inflation, raising rates and potentially slowing overall economic growth.

Some notable economists have already been predicting the dual threat of rising prices and slower growth. Last year, Former Fed Chair Alan Greenspan told Bloomberg, “Stagflation is about to emerge. We are moving into a different phase of the economy, to a stagflation not seen since the 1970s.”

3 Groups For Safety And Pricing Power
I doubt we see the extremes of stagflation that have happened in the past but even if the worst is avoided, the trend is clearly to an environment of higher prices and subdued economic growth. Ahead of this environment, investors may want to reposition in sectors and industries with stronger pricing power that can share their costs with consumers.

Companies producing commodities have already started rallying on higher metals and energy prices. Prices for real assets like precious and industrial metals, oil and gas, and real estate are linked to inflation, though higher interest rates could weigh on property prices.

Cabot Oil & Gas (NYSE: COG) has a strong position in the Marcellus Shale, a low-cost region for natural gas production that puts the company’s break-even around $2.00 per mcf against spot prices around $2.80 per mcf. The company owns the rights to an additional 3,000 drilling locations within its undeveloped footprint which gives it the potential to increase output easily.

Cabot has been divesting non-core assets to become a pure-play natural gas producer. That’s left it with a very strong balance sheet with just $1.2 billion in debt and $480 million in cash. With operational cash flow of nearly $900 million a year, it’s been able to increase the dividend payout and re-authorize a share repurchase program.

Pharmaceuticals typically have strong pricing power and much of the rhetoric against the industry seems to have died out. An overhang of sales weakness in generics, public concern on pricing and heavy debt loads has kept the industry from benefiting from the broader market rally and some good deals can be found.

Allergan’s (NYSE: AGN) recent decision to back out of a bidding war for Shire (Nasdaq: SHPG) gives me new confidence in the company. While the acquisition could have given Allergan a diversified rare-disease portfolio of drugs, it would have meant a debt-binging acquisition and I’m always hesitant around the ‘winner’ of bidding wars.

Allergan has used the cash from its generics sale to Teva wisely with smaller acquisitions, share repurchases, and to pay down debt. The company now holds just $19.3 billion in net debt and generates almost $5 billion in free cash annually.

Allergan has one of the most diversified drug pipelines in the industry. Only two drugs, Botox and Restasis, account for more than 9% of sales. This helps to smooth revenue versus peers that must worry about sales growth when big blockbuster drugs come off patent.

Companies in the utilities sector could provide safety as price increases are often linked to increases in the CPI or other indexes. State regulated utilities have especially stable sales and benefit from no competition in their regulated markets.

The Southern Company (NYSE: SO) is quickly transforming itself from a mostly coal-generated utility to one powered by nuclear, natural gas, and other renewables. The company enjoys a state-regulated monopoly position in four states which together account for approximately 80% of earnings.

While regulatory approval on rates can slow earnings growth, it also means that capital spending and increased output is all but guaranteed to be profitable as long as the company maintains a return-on-investment hurdle for spending. Shares pay an attractive 5.1% yield and the company is investing heavily to increase earnings.

Risks To Consider: While some sectors would provide relative protection, levels of inflation and growth like those seen in the 1970s could decimate stocks and the bull market.

Action To Take: Position in companies within utilities, pharmaceuticals and energy with stronger pricing power and relatively stable sales against the trend to higher producer prices and a sluggish economy.

Editor’s Note: Since 1926, one collection of stocks has accounted for HALF of the S&P’s return — through every market environment imaginable. If you don’t have this group in your own portfolio, you could be missing out on the single best place to put your money this year and next. Learn which stocks can…