Berkshire Hathaway recently reported its equity holdings through Form 13-F and caught the market by surprise with some additions and sales.

As the market fixates on individual purchases and sales, I’ve found looking more broadly at the portfolio reveals valuable insight into Warren Buffett’s outlook on stocks.

Combining this with position changes in individual stocks, investors may be able to get ahead of The Oracle of Omaha by investing in best-of-breed companies within the industries.

What’s In Warren Buffett’s Portfolio?
Buffett took the lead in 1965 and has rewarded investors ever since. Returns on shares of Berkshire Hathaway have climbed 20% annually over the last 38 years, easily beating the S&P 500. That means instant market buzz anytime the company files its Form 13-F, a regulatory disclosure of portfolio holdings, which was released  May 15 showing first-quarter activity.

The media loves to go straight to the individual stocks and changes in Buffett’s portfolio when a new 13-F is filed each quarter,  but a wider view can be just as instructive in revealing his outlook on the market.

The Berkshire equity portfolio includes just 42 companies for a total of $196 billion and is surprisingly concentrated in three industries; Banking (29.4%), Consumer Staples (18.4%), and Credit & Financial Services (11.9%). The portfolio also holds a large position in technology (22.8% of total investments), but this is attributable to just one company so may not indicate an opinion on the industry. 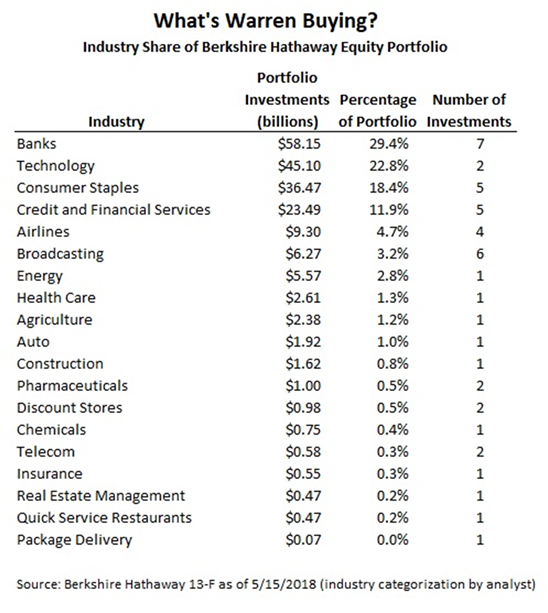 That large tech investment is, of course, Apple (Nasdaq: AAPL), of which Buffett added 74 million shares last quarter for a total worth $44.8 billion. Buffett has said he doesn’t believe in diversification, instead choosing to pick individual investments, and he’s proving it here.

While the industries do not account for a large percentage of the portfolio, the breadth of Buffett’s investment across several companies in Airlines and Broadcasting may indicate a strong opinion. Both of these industries has struggled over the years as fuel prices and pension obligations weigh on the airlines and the shift online draws viewers from traditional broadcasting and Buffett might feel there’s now good value in best-of-breed names.

Big Changes In Berkshire Hathaway Investments
While I like reading Berkshire’s 13-F to watch for shifts in Buffett’s views on entire industries, just as much can be gleaned from changes to individual positions. The quarterly disclosure brought confirmation of what the market had picked up from commentary but also a few big surprises.

Buffett’s investment in banking is even more interesting that the overall over-weighting appears. Berkshire cut its position in Wells Fargo & Company (NYSE: WFC) to come in under 10% ownership last quarter but still holds $24.7 billion in shares, it’s second-largest holding. At the industry-level, Berkshire added to its banking position with 3.7 million shares of US Bancorp (NYSE: USB) and 1.4 million shares of Bank of New York Mellon (NYSE: BK).

US Bancorp should benefit from rising rates with 60% of revenue from core retail and wholesale banking. The bank is not large enough to be designated systemically-important, so it escapes some of the regulatory burden requiring capital controls. This has helped it use available cash more efficiently than larger peers and generate a return on common tangible equity at 19.3% in the first quarter.

Buffett also more than doubled his stake in generic drugmaker Teva Pharmaceuticals (NYSE: TEVA) to 40 million shares. This was a new investment in the fourth quarter and could still be a good entry point for new investors.

Shares of Teva have nearly doubled from the low of $10.85 last November but are still 37% from the 52-week high. The company was one of several drug-makers punished last year on rising competition in generics, increased scrutiny over drug prices and fears of over-leveraged balance sheets.

A cost-cutting program was able to boost the operating margin by 6.8% to 22.4% in the first quarter. Worries of weak pricing in generics seem to be helping the company somewhat with less competition for its blockbuster MS treatment, Copaxone, than expected. Even as Copaxone sales decrease, the company has a strong pipeline of branded- and generic-drugs to drive revenue.

Berkshire’s $15.3 billion in American Express (NYSE: AXP) does not get as much attention but represents 18% ownership of the company and part of Buffett’s strong position in credit and financial services.

American Express is taking its business global with 20% growth in small business cards and 16% growth in consumer business internationally in the first quarter against still-solid domestic growth above 9% for the segments. Management has remained disciplined in the growth, with operating costs rising just 5% on a year-over-year basis. This kind of responsible growth provides the strong cash flow that Warren Buffett loves in his investments.

Another 7.3 million shares were added to the investment in Monsanto Company (NYSE: MON) for a total of 19 million shares. Buffett is betting on the successful closing of the company’s acquisition by Bayer for $128 per share, just 1.9% above the current share price.

Risks To Consider: The 13-F form shows investments as of March 31 and may not reflect current investment, though Berkshire has offered no indications of major changes.

Action To Take: Follow The Oracle of Omaha into best-of-breed names in his favorite industries, including banking, credit, and pharmaceuticals.

Editor’s Note: Can you live on $1,400 a month? You might have to
That’s the average monthly benefit that most retirees see when they cash their Social Security check. To put that in perspective, the average living expenses of a retiree can be as much as twice that amount. But one group of investors is adding another $1,916 to that monthly payout. They’re not using a scheme or accounting trick. It’s a simple, powerful trading strategy known as The Dividend Trifecta. Click here to see how they are padding their retirement accounts while Social Security sinks further and further underwater.