From a demographic trend standpoint, the 20th century in the United States was the “Century of the Named Generations”. Ok, cut me some slack. It’s hard to come up with catchphrases sometimes.

The second decade of the 20th Century saw the rise of the post-World War I Lost Generation, so named because of the horror of the world’s first, truly modern war inflicted on those who served and returned forever scarred. Then, from the Great Depression and World War II came the Greatest Generation, who persevered through two enormous global crises and emerged victorious.

#-ad_banner-#Their prosperity begat the Baby Boom Generation. The 1990s typified the so-called Generation X (also the name of Billy Idol’s punk rock band) of which I am a member. Originally referred to as “slackers” due to the tight job market we found ourselves in during the Bush 41 recession when most of us graduated from college. Most of us are 50 years old now, sending our own children to college and doing quite fine, thank you.

Then Came The Millennials
Despite the Civil War-sized beards, skinny jeans, and craft beer, this generation is the largest consumer force the American economy has ever seen. According to the U.S. Census, there are approximately 83.1 million people who fit into the millennial demographic band, beating the 75.4 million Baby Boomers by better than 10%.

To demonstrate this consumption power, I’ll use a simple example. According to company data, the average American consumes 403 Coca Cola (NYSE: KO) servings per year. Multiplied by 83.1 million people translates into 33.5 billion single serving (12 ounces) Coke products annually. Coke’s profit on a single can is roughly a nickel. Gross sales to Coke would come out to be around $1.7 billion. This means that the millennial generation would be responsible for 5% of the company’s annual GLOBAL sales.

But as a consumer force, it’s much bigger than that. It’s all about household formation.

Here’s a chart tracking household formation with the S&P 500 index going back to the end of World War II. 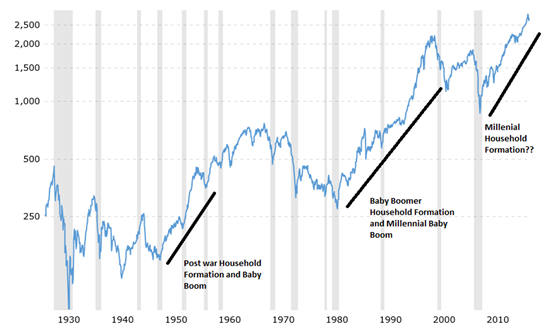 As humans, we tend to pair up, make nests, and produce more humans. It’s what we do. Remember, I’m a history nerd and I firmly believe in macro patterns.

My last article examined 18- to 20-year market cycles, both bear and bull. Piggybacking on that theme, U.S. equity markets are in the early phases of an extended structural bull run fueled by massive, millennial household formation. Here’s how long-term investors can cash in.

New Residential Investment Corp (NYSE: NRZ)
Officially classified as a mortgage real estate investment trust (REIT), NRZ is not typical of its category. The company focuses on investing in the mortgage servicing rights (MSR) portion of the actual mortgage. The monthly MSR is built into the mortgage payment and comes to roughly 30 basis points (0.003%) of the principal mortgage amount annually. NRZ owns the MSR, pays a third party 6 basis points (bps) to physically service the mortgage, and keeps the 24 bps excess.

Pioneering this type of mortgage investing, NRZ has leveraged that knowledge into some impressive numbers, including a staggering 29.5% return on equity (ROE), 168% average annual EPS growth and 27% average annual growth of its dividend which currently sits at a compelling 11%. Shares trade at $18.18 with a forward P/E of just 8.06.

Of all the automakers, Ford is the best value with the best management. With the Ford family still actively involved in the business, Ford is poised to grow market share by concentrating on SUV and light truck sales. The light truck segment is particularly intriguing in that should a house building and remodeling boom accompany a household formation phase (it should), Ford would benefit through fleet sales and leasing by contractors and other related service providers.

On a global basis, Ford should do well with smaller vehicles with the continued rise of the emerging middle class. Throw in driverless technology and other applications and brand name trading with a forward P/E of just 7.5 and yielding 5.2% is no brainer bargain.

Whirlpool Corp. (NYSE: WHR)
I know, I’ve pounded the table on this one and am continuing to do so. Growing families generate mountains of dirty clothes, dirty dishes, and require massive quantities of food that requires refrigeration and cooking. Once you form a household, household appliance acquisition is a given.

Notice I didn’t include any retailers? It’s too early to tell. This wave of mass consumption may take a little longer to crest as the retail landscape settles. Remember, consumers need to learn how to shop just as merchants must learn to sell to them.

Also, unlike their parents, millennials are saddled with record amounts of student debt. Debt service always puts a damper on spending discretionary income.

Action To Take: All three stocks have an average forward P/E of just 8.2, which is almost mind-bogglingly cheap. As this thesis plays out, expansion of that multiple to just 12, which is still a bargain, would result in capital gains approaching 50% over a two- to three-year period.

The blended annual dividend yield of 6.4% would translate into average annual total returns in excess of 20% over a three-year period. However, as this idea is, indeed, a long game. A longer holding period would return even bigger gains.

Put an extra $23,000 in your pocket every year…
There’s a simple investing system that regular investors are using to collect extra paychecks every month… totaling as much as $23,000 per year. It’s called The Dividend Trifecta, and they are telling us that this $23,000 number is the real thing. They don’t have special resources or connections… they just have The Dividend Trifecta… and 10 spare minutes a month to use it. Now it’s your turn: click here to learn how it works.