Why Millennials Should Develop A Retirement Plan Now

For novice investors, compound interest is ‘interest on interest.’ It’s based on the idea that interest earned on a sum of money is reinvested back into the principal to earn additional interest in the future. Thus, if an investor were to leave their interest to earn additional interest over a long period, a sum of money will grow exponentially — especially in the latter years. The following chart illustrates the wonder of compound interest compared to simple interest. 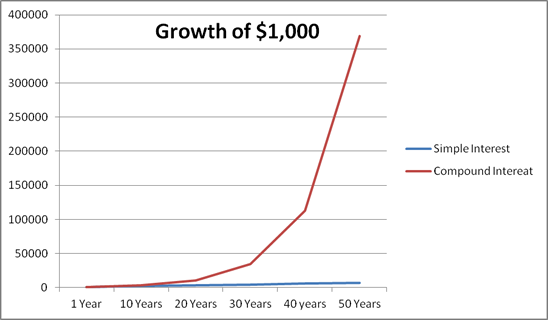 The Power of Time
But there’s another important concept to appreciate the power of compound interest. Investors need to understand fully the importance of allowing time to work its magic. Now, it’s hard to tell from the chart, but in the 30th year, the value of the $1,000 was still just $34,711. It’s calculated by the formula:

Social Security paid retirement, survivor, and disability payments of $952 billion to about 62 million people in 2017. Unfortunately, OASDI took in only $911 billion in payroll taxes from current workers — leaving Social Security with a cash deficit of $41 billion in 2017. To offset this difference and cover other expenses, the government sold $85 billion in Treasuries — adding to the national debt.

Some wonder why the government doesn’t just redeem some of the $2.9 trillion in bonds the trust fund has on its books. Of course, the answer to that question is easy. These bonds are non-marketable. A non-marketable bond is a security the Treasury sells to itself without any transfer of cash or other assets. In short, the Treasury obligates itself to pay the principal and semi-annual interest payments to the Social Security Administration out of future government revenues. In economic terms, we say these bonds are unfunded.

That’s because OASDI’s total costs will exceed total income, including income from bond sales, starting this year. And this trend is expected to continue throughout the Trustees’ 75-year projection period, hitting millennials the hardest.

Action To Take: If you’re a millennial, or the parent of one, the time is now to develop a plan of action to have any hope of a decent retirement. The benefits of compound interest are only available to those investing over the long term. Let me give you an example, a $1,000 contribution into a retirement plan today combined with a monthly deposit of $150 will grow to $360,000 by the time a Millennial turns age 65. Compound interest is your friend, but only if used.

So, if you have access to a retirement plan with your employer, begin putting aside a portion of your pay starting with your next paycheck. If you don’t have access to an employer plan, start a traditional or Roth IRA today. Your financial future depends on it.

Editor’s Note: Everyone knows that Social Security is in bad shape. But most people don’t realize just how desperate the situation is… to fix Social Security benefits have to be cut by 22% immediately. Or payroll taxes have to jump by 32%. So you’re facing pain whether you’re working OR retired. But there’s a way out. A program that can pay you $40,653 per year for the rest of your life. And it has nothing to do with the government. Check it out here.