As Predicted, Lumber Prices Are Soaring — And You Can Profit…

It may not show up in the official numbers, but you can see it (and feel it). Whether it’s at the gas pump, the hardware store, or the grocery store, it’s there.

Let’s be honest… whether the official measures show inflation or not, it’s rather irrelevant whenever it hits you in the wallet.

To be clear, I’m not interested in debating monetary policy or the merits of inflation itself. I’m also not interested in bringing up the topic to complain about it, either. I want to profit from it – and I’m guessing you do, too. And if there’s one thing we know, it’s that commodities are a good place to be during times of inflation.

As you know, we’ve been talking on and off for weeks about the commodity “super-cycle” – the factors at play, the commodities we like best, and how investors can best position themselves to profit.

Today, I want to resume our coverage of this by talking about a particular commodity that’s been grabbing headlines lately. It’s one of the most vital materials around, and up until recently, it’s scarcely gotten the attention of the average investor. Is it gold? Copper? Palladium?

It’s timber. And it’s outperforming just about everything right now. Chalk up another winning prediction from my colleague Jimmy Butts, who predicted that timber would be the “sleeper investment of the decade” in his latest predictions report for Top Stock Advisor.

That being said, if timber keeps up with the run it’s on right now, there will be nothing “sleeper” about it.

To get your hands on his research, go here now.

In the meantime, here’s Jimmy with more…

It was the spring of 2018 and I was nearly ready to begin a massive remodel on my home. I’m talking about tearing down half my house and rebuilding.

But I couldn’t pull the trigger…

I was keeping a close eye on lumber futures and prices were skyrocketing. In my usual fashion, I downloaded data of historical lumber prices and charted it out. I found that the historical average was around $260 per thousand board feet (that’s how lumber futures are quoted).

When I was getting quotes on my lumber package, the price was climbing past $400… $500, and then peaked in May 2018 at around $630 — a record at the time. The rise in lumber prices at the time was largely due to trade tariffs and a spat with Canada.

I talked my wife into waiting on our rebuild, as I was sure lumber prices would come back down. Part of the beauty of futures is you can see what folks are willing to pay in the future for deliverables.

Fortunately, lumber prices settled back down, and we started on our project a year later. We saved thousands of dollars by waiting for lumber prices to come back down.

Today, people would gladly pay that $630 per thousand board feet. I’m not sure if you noticed, but lumber prices are astronomical. They just hit a new milestone… $1,200.

Want to build your kid a treehouse this summer? Forget about it. You used to be able to run down to the lumber store and snag 2x4s for $2. Today, that same 2×4 will run you between $7-$9.

A sheet of plywood costs more than a family of four eating at the local Chili’s.

If you want to know how your neighbor is faring, just see if they’re still knocking out items on their honey-do list that require lumber.

As you can see, since last spring when lumber was trading for under $250, it’s been on a rocket ship ever since. 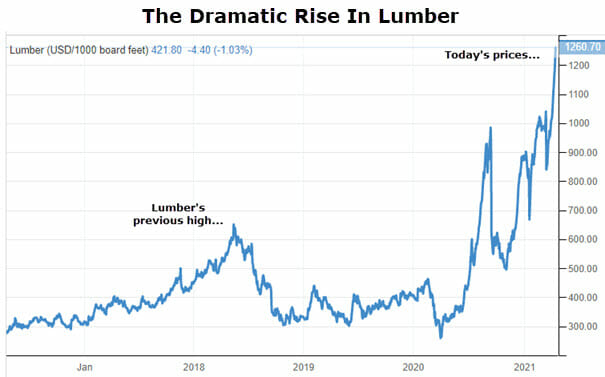 So what’s causing this? Well, it’s a culmination of sawmills and transportation being shut down for Covid-19, which caused a dip in supply. Meanwhile, folks staying at home decided to tackle renovation projects, coupled with low interest rates and a massive demand in the housing market… and you have a perfect storm that’s caused prices to jump to these record levels.

Despite these pesky lumber prices, demand isn’t slowing down. The work-from-home revolution is still here, which means people are still at home doing projects.

An even bigger catalyst is the housing market…

A new analysis from Freddie-Mac — the mortgage finance company — revealed that the U.S. housing market is 3.8 million single-family homes short of what is needed to meet the country’s demand.

I have buddies that are builders, and they are booked out solid for the next year. Even crazier are the margins that these home-builders are now producing. Local builders where I’m located have told me they are building homes with over 30% margin… this is double, even triple their regular margins.

Upon hearing this, I dove into the financials of one of the largest homebuilders in the United States, Lennar Corp. (NYSE: LEN), to see if they too were enjoying thicker profit margins. They are…

For instance, Lennar’s gross margins in its latest quarter have swelled to 26.1%. Two years ago for the same quarter, margins were 19%. Operating profit margins tell a similar story… in its most recent two quarters these figures came in at 16.1% and 16.8%. The same two quarters in 2019 were 8.4% and 12.4%, respectively.

That’s huge. To put that into perspective, companies are excited if they can squeeze an extra one or two percentage points out of their margins.

Let’s Profit From The Trend (Again)

I originally made this prediction about lumber prices for my 2021 Predictions Report for my Top Stock Advisor service. In that report, I shared the names of a couple of timber REITs that are likely to provide good returns for investors over the long-run.

But over at my Maximum Profit trading service, we’ve already profited from the booming real estate market several times. For example, we made trades in eXp World Holdings (Nasdaq: EXPI) — twice — and Zillow Group (Nasdaq: ZG). We made a quick 10% return in EXPI in just 14 days, then pulled out a 40% gain in about two months. Shares of Zillow Group doubled during the time we held it (our official return was lower as we pulled profits along the way).

Recently, I made the decision to jump back into this space, albeit indirectly in Maximum Profit. This time around, we went straight to the source, as my system has flagged two lumber companies as “Buys”. If history is any guide, we’ll be able to ride this trend for as long as it lasts and make a killing.

Go here if you’d like to check out my latest research now.