It’s Official: Inflation Is Here. Now Here’s How To Protect (And Profit)…

As we’ve mentioned over the past few weeks, the signs were all there. But now we have confirmation. According to the Bureau of Labor Statistics, the Consumer Price Index (CPI) jumped 4.2% in April, from 2.6% in March, in a report released on Wednesday. The expectation was for 3.6%.

This was the biggest jump we’ve seen since 2008.

Then on Thursday, we learned that the Producer Price Index (PPI) rose 3.6% year over year. And that’s the largest increase since the Labor Department began collecting data in 2014.

I was particularly struck by this one detail in the CPI data… The price for used cars and trucks spiked by 10% in April year over year. 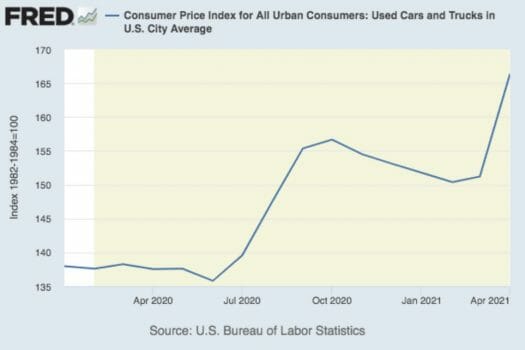 Pretty crazy, right? Not gonna lie, I sort of saw this percolating months ago.

I’m a truck guy (it’s practically obligatory in Texas). And every Jim Bob I know with a little pocket change has been talking about how hard it is to find a good used truck at a reasonable price. By my estimation, the same exact pickup is worth at least $3,000 or $4,000 more than it was a year ago.

The reasons why this is happening have more to do with inflation – it’s also about Covid-disrupted supply chains. We’ll keep an eye on these themes as they continue to develop.

In the meantime, here’s my colleague Jimmy Butts with more thoughts on inflation – including how you can protect yourself, and profit.

What’s All This Inflation Talk About Anyway?

Inflation has been a keyword this year in the investment space. I typically try and avoid talking about topics that are covered so thoroughly in the mainstream media, as I don’t want to regurgitate what’s already been said.

However, I haven’t read anything that really explains inflation and why it’s something we can’t ignore. Plus, this silent killer is critical to understand if you want to keep — much less build — your wealth.

First, here’s what some of the greatest minds of our time have said about inflation:

In short, rapid inflation is not good.

Right now, we are in a massive stimulus, money-printing experiment. The printing presses are running hot, as the government continues to print money and hand it out like its candy at a Fourth of July parade.

But here’s what’s going to happen — or is already happening — in my opinion.

All this easy money will make people feel better and richer, temporarily. Their checking and savings accounts will be fatter, and they’ll feel like they’re finally getting ahead.

Unfortunately, they’ll eventually realize that they are in fact, not any wealthier. They’re still broke, just with more money in their account. Why? Because of that dirty thing called inflation.

They’ll realize that they still can’t afford that car they’ve always wanted. Or that house in their favorite part of town. After all, used car prices jumped 10% in April compared to the month prior, the biggest increase ever. Home prices are surging to astronomical levels and there’s still a shortage of homes.

Here’s the sneaky thing about inflation that seems to get neglected in the conversation… inflation picks up faster than anyone thinks, and the Fed usually reacts slower than they need to.

So, if this massive rise in inflation is indeed on its way, here are a few things you can do to curb its devastating effects.

How To Beat Inflation

In every market, there are winners and losers. The Maximum Profit system is fantastic at identifying not only stocks but industries that are winning. But that also means you can’t maintain a death grip on those losers.

Think about it… you hold onto a massive loser, plus inflation, that’s going to be a double whammy. Not only are you sitting on a capital loss, but while you’re hoping for the day it gets back to even your money will be worth even less (even if you do get back to that breakeven point).

I still believe the stock market will be one of the better ways to curb the devastating effects of inflation. The money sitting in your savings accounts, which doesn’t earn anything, is losing value. Granted, I do believe you need to have a good portion of cash for emergencies.

But outside of trading strategies like we employ at Maximum Profit, look for wonderful businesses that are trading at a discount. With the cloud of inflation hanging over the market, I’d suspect investors will rotate into value stocks versus growth stocks.

Think consumer staples. The cost of these goods can be passed onto consumers, like Clorox and Hershey.

Don’t be afraid to look beyond our borders and venture into emerging markets.

Of course, every article you’ll likely read will tell you to invest in alternative assets like gold and silver, or bonds, or treasury inflation-protected securities, (“TIPS”). But I personally don’t think TIPS and bonds aren’t a compelling investment right now.

Look to diversify your wealth into real estate, and dare I say it… perhaps some cryptocurrencies.

Outside of investing — and this is where you can truly hedge inflation is diversify your income. Start an online business, look for cash-flowing and low-ownership maintenance businesses like storage units, car washes, parking garages, etc.

The biggest piece of advice I have — and this is regardless of whether we actually see inflation or not — is don’t be complacent. Don’t do nothing. Be proactive, get creative, because the goal is to create wealth and protect it.

By doing this, it provides us with the most valuable asset in our lives and that’s time.

Editor’s Note: One of the best ways to beat inflation is simple: earn more income. And that’s why you’ll want to check out the latest offer from our colleague Amber Hestla, chief investment strategist of Income Trader.

Amber is telling her readers how a 16-digit “pin code” can unlock instant payouts for investors week after week. In fact, you’ll begin to think of this money-generating code as an extra paycheck. Once you see how this works, you’ll be shocked that more investors aren’t using it to make extra cash. To get the details, click here now.